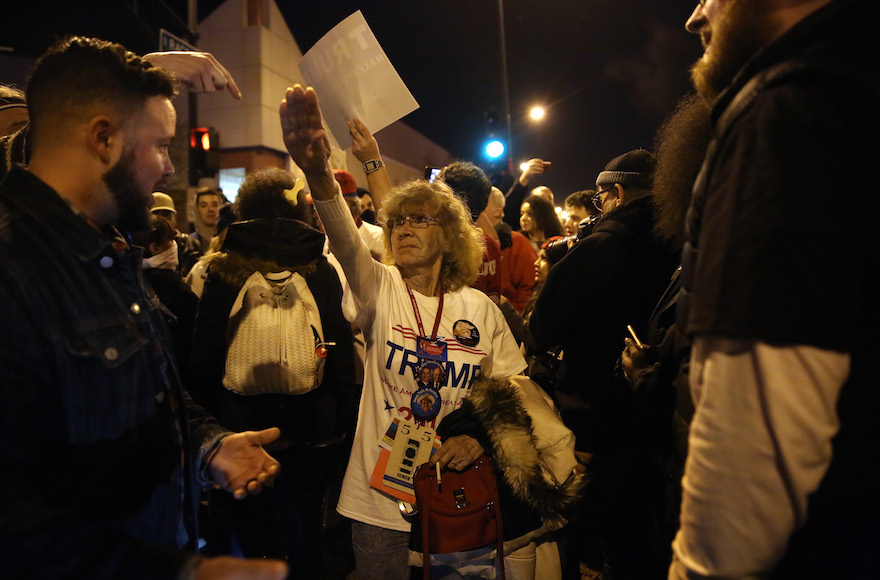 This weekend saw the Nazi equations shift from the Republican front-runner to his supporters, who were recorded in violent and provocative situations at various campaign rallies.

A Trump rally was shut down Friday night in Chicago after some of his supporters clashed with protestors. Video of a Trump supporter punching an African-American man made headlines, and comedian Bill Maher played it on his HBO show that night.

The day took a Nazi-esque turn with the circulation of a photo of a woman named Birgitt Peterson giving what she admitted was a “heil Hitler” salute outside the rally. She said she meant the gesture as a counter-protest.

“They said Trump is a second Hitler,” Peterson told The New York Times. “I make the point they are demonstrating something they had no knowledge about.”

On Saturday, a Trump supporter explicitly invoked the Holocaust in a confrontation with a protestor outside a Kansas City rally.

“Go to Auschwitz,” said an unidentified man in a Yankees T-shirt. “Go to f—ing Auschwitz.”

Not surprisingly, the Internet had a lot to say about that.

Some commentators on Twitter tried to add a little humor to the situation.

“Go to Auschwitz” — what a curious way to say “I have economic grievances.” https://t.co/nksM3AhxyN

Others weren’t in a joking mood.

I’m still pondering just how dark your soul has to be to shout “Go To Auschwitz!” at a political rally.

Trump supporters aren’t violent, they just want you to go to Auschwitz https://t.co/0RydT1Pt6L

The incident also spurred references to previous Trump controversies, like the one surrounding his hesitance to disavow the support of former Ku Klux Klan leader and notorious anti-Semite David Duke.

“Go back to Auschwitz”
Are we going to hear Trump disavow this in no uncertain terms?https://t.co/JDpFUsIeiA

I will personally give money to any AIPAC intern that plays that ‘go to Auschwitz’ Trump supporter clip during Trump’s AIPAC speech.

Trump has called the comparisons of him to Hitler “ridiculous,” but not all his supporters seem to have gotten the memo.