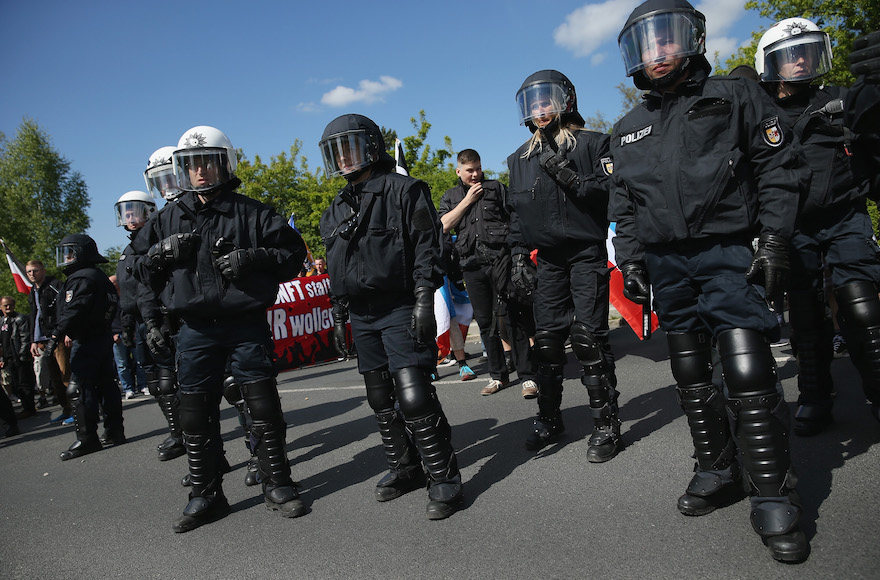 BERLIN (JTA) — Germany’s Interior Ministry has banned an extremist right-wing group and carried out raids on its leaders in 10 states.

Police raided 15 cells of the White Wolves Terrorcrew early Wednesday morning after simultaneously informing 12 group members of the ban. The group, which was founded as a fan club for a skinhead band of the same name, is described as violent and neo-Nazi. The government will confiscate its assets.

In the raids, police took weapons — including a crossbow and several small-caliber weapons — computer hard drives and propaganda. No arrests have yet been reported.

In all, police encountered 16 members of the group, including its so-called Fuehrer, who lives in Hamburg.

Germany’s interior minister, Thomas de Maiziere, said at a news conference later Wednesday that the White Wolves Terrorcrew acted “openly and aggressively against our country and our society, against migrants and dissidents.” He said the group, which has about 25 leaders, planned violent attacks on refugee shelters. It also pushed a xenophobic and misanthropic ideology.

The White Wolves Terrorcrew reportedly has been charged with 11 crimes between 2008 and 2014, including the use of banned anti-democratic symbols, causing grievous bodily harm, resisting arrest and incitement to hate.

Police reportedly subjected members to a search in 2009. At the time, 23 members were charged with violating a ban against wearing uniforms as a self-styled political movement.

Banning a party is difficult in Germany because of post-Nazi era laws designed to safeguard free speech. But German law also bans the glorification of Nazi ideology, use of Nazi symbols, speech and even music.

Germany’s highest court is considering whether it has enough evidence to outlaw the far-right National Democratic Party of Germany, or NPD, Germany’s largest neo-Nazi party. Recent statistics suggest the party has fewer than 6,000 members, but Germany’s intelligence services suspect the party of fomenting violence and hatred, and of using the democratic system to undermine the state.