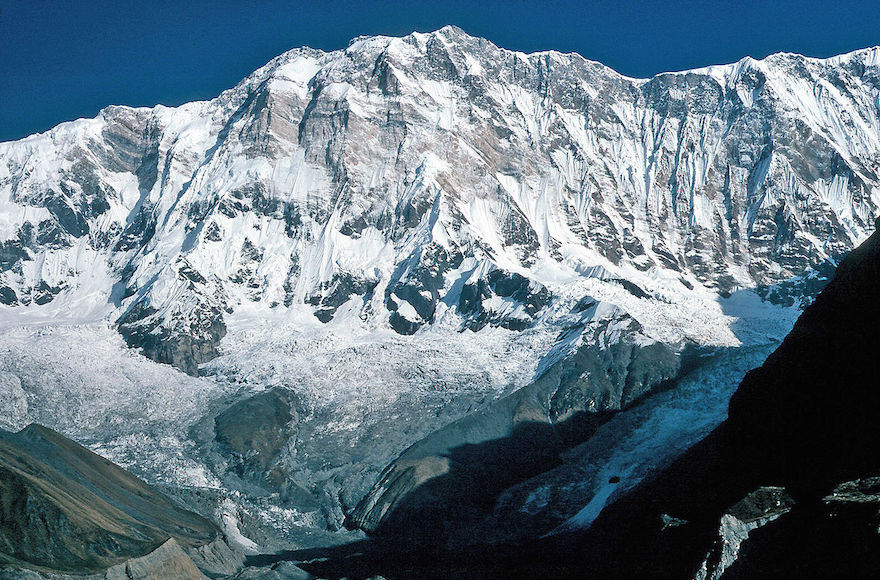 The Annapurna I peak in the Himalayas. (Wikimedia Commons)
Advertisement

(JTA) — A Chabad rabbi in Nepal joined a medical evacuation helicopter he arranged to rescue two stranded Israeli backpackers who were suffering from hypothermia at an altitude of 15,500 feet.

Rabbi Chezki Lifshitz, 42, flew with the helicopter crew Tuesday to rescue Maya Butbul and Sharon Nachumi from their predicament on a ridge in the Himalayas, 100 miles from the capital Kathmandu, he told JTA.

The female backpackers messaged him an SOS signal with a satellite phone they borrowed from a Chabad House in Kathmandu, reported the rabbi, who co-directs Chabad of Nepal with his wife, Chani. “Hypothermia had set in, and every minute was precious,” he said.

The Lifshitzes, who were born in Israel, have rescued dozens of backpackers, Israelis and others, during their 16-year residence in Nepal. In the wake of the massive earthquake that devastated the country last April, the rabbi flew to the hardest-hit areas, rescuing stranded Israeli hikers and tourists and bringing aid to locals. Approximately 9,000 people died in the catastrophe, including one Israeli.

Thanks to Chilik Magnus’ rescue squad, the Israeli Foreign Ministry and fellow Israeli backpackers trained in first aid, who cared for the women until the chopper arrived, Lifshitz said the women were brought from the Annapurna range in the Himalayas to a hospital in Kathmandu, where they are currently being treated.

The GPS devices that the rabbi used to locate the women are linked to satellite phones donated by the family of Nadav Shoham, an Israeli hiker killed in a freak blizzard in 2014, to enable other hikers to reach the Lifshitzes in an emergency.