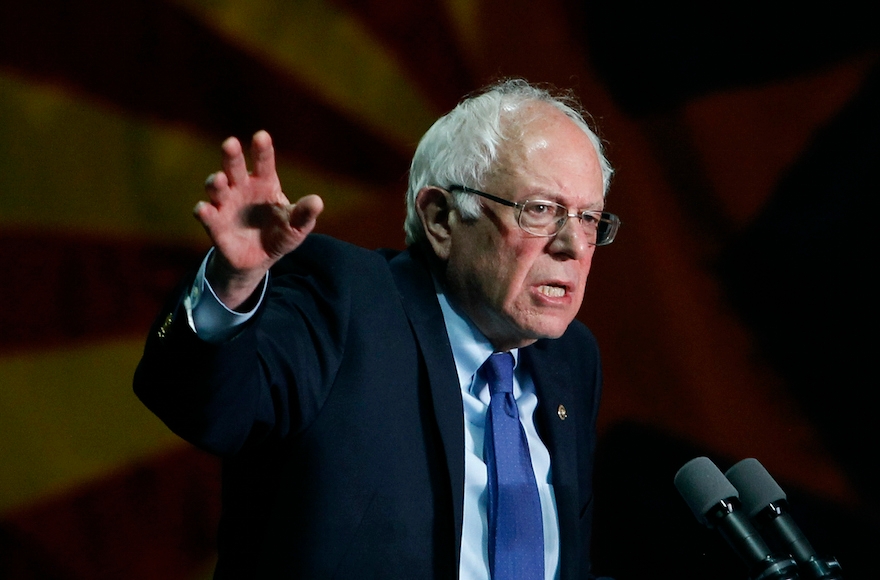 WASHINGTON (JTA) — Citing his campaign schedule, Bernie Sanders said he would not address AIPAC’s conference next week, making him the only presidential candidate that will not attend the large annual pro-Israel gathering this year.

“I would very much have enjoyed speaking at the AIPAC conference,” Sanders said in a letter Friday to Robert Cohen, the American Israel Public Affairs Committee president.

“Obviously, issues impacting Israel and the Middle East are of the utmost importance to me, to our country and to the world,” he said. “Unfortunately, I am going to be traveling throughout the West and the campaign schedule that we have prevents me from attending. Since AIPAC has chosen not to permit candidates to address the conference remotely, the best that I can do is to send you a copy of the remarks that I would have given if I was able to attend.”

Sanders noted that he and Cohen had spoken earlier in the day.

Sanders, trailing Hillary Clinton in the race for the Democratic nomination, faces contests in Utah, Idaho and Arizona on Tuesday.

AIPAC has allowed presidential candidates to deliver speeches remotely in past elections. In 2012, Mitt Romney and Newt Gingrich, then candidates for the Republican presidential nomination, addressed the AIPAC conference via satellite.

AIPAC said it was no longer the lobby’s practice to permit remote addresses.

“We invited the Senator and we gave him the same opportunity to speak as the other candidates,” an AIPAC official told JTA in an email “We understand that he very much wanted to come but could not get back from West Coast to do it. We did change our policy and no candidate was offered/permitted the opportunity to address the conference remotely this year.”

Sanders said he would be submitting the text of a speech to AIPAC and asked the organization to make it available to the 18,000 activists who will be attending.

“We should be able to get that speech to you on Monday,” said Sanders, who has been petitioned by AIPAC critics not to attend the conference. “Any help that you could give us in getting those remarks out to your members would be much appreciated.”