How Jewish groups plan to protest Trump at AIPAC 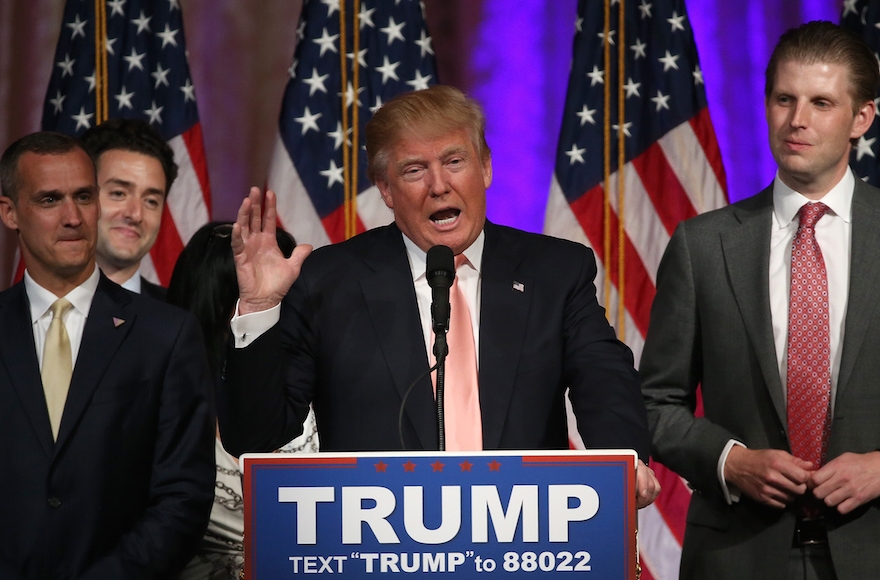 And whatever you do, hit the Jewish texts.

Donald Trump’s scheduled appearance on Monday at the American Israel Public Affairs Committee’s annual Policy Conference has sparked a microcosmic Jewish version of the question now besetting much of the American polity: How do you solve a problem like the Donald?

The announcement last week that Trump — the billionaire real-estate developer who is the front-runner among Republican candidates and who has aimed broadsides at Mexicans and Muslims among other groups — will speak at AIPAC has sparked a flurry of debate on social media over whether his appearance is appropriate and whether it merits protest.

For some, AIPAC’s single-issue focus on the U.S.-Israel alliance means it has no choice but to host an increasingly likely candidate for the nation’s highest office. Others insist that organizers of and delegates to one of the year’s largest Jewish gatherings — some 18,000 people are expected to attend — must stand up for what the Reform movement, in a statement, called the “values we hold most dear – justice, mercy, compassion, peace.”

And among those who are planning protests, there is disagreement over what would be the most effective way of signaling displeasure. Some would-be objectors to Trump advocate that protests be as non-intrusive as possible, abjuring even the word “protest” and recommending that folks simply absent themselves from the speech. Others are seeking a more visible sign of dissent from what they say is Trump’s bigotry.

The one thing all agree on is that studying Jewish texts while Trump is speaking is the right way to go.

Reform officials are planning to hand out pages of text to protesters who will absent themselves from the main hall during Trump’s speech. Grouped in pairs – or “hevrutas,” as study partners are called in the yeshiva — the protesters will study the Jewish writings while monitoring Trump’s speech on screens scattered throughout the conference venue. After the speech, the hevrutas will blast out on social media their impressions of how Trump’s speech lined up with the values in the text, tagged with the AIPAC conference hashtags, #cometogether and #pc16.

“It will be a conversation about dignity and the responsibility of officials to hold up dignity,” said Rabbi Jonah Pesner, who directs Reform’s Religious Action Center, one of three Reform bodies organizing the protest. The others are the Union for Reform Judaism and the Central Conference of American Rabbis. “Human dignity is so important it even supersedes biblical prohibitions,” Pesner said.

Biblical prohibitions, maybe, but even among the Reform officials who plotted out the protest there was a reluctance to cross AIPAC, American Jewry’s main conduit for high-level pro-Israel advocacy.

Pesner said the Reform movement wrote to Trump asking for a meeting that would launch what Pesner hoped would be Trump’s “hard work of teshuvah,” or repentance.

Repentance would be quite the “get” from a candidate who has yet to apologize for his many insults during the campaign, including those aimed at women, Asians, POWs, and those with disabilities.

Two rabbis, Rabbi David Paskin of Palm Beach Gardens, Fla., and Rabbi Jesse Olitzky of Congregation Beth El in South Orange, N.J., have organized a protest they dubbed “Come Together Against Hate,” a play on the conference’s official theme, “Come Together.”

Trump’s Jewish lawyer, Michael Cohen, made it clear Camp Trump does not think much of the rabbis.

“Anyone who believes that @realDonaldTrump is a racist doesn’t know #Trump at all,” he said on Twitter on Thursday. “Shame on the protesting rabbis with #AIPAC.”

How visible the protest should be was a subject of debate among those planning “Come Together Against Hate.”

The organizers settled on a compromise: “Many will be standing up before he speaks and silently leaving the room,” said the announcement by the group, which is separate from the Reform movement’s initiative. “Others will be absenting themselves from his introduction as well.”

Paskin acknowledged that a mass organized walkout when Trump walks in would have a greater visual impact, but said the group could not reach a consensus.

“When we started this Facebook group on Sunday or Monday night, there were people with all sorts of powerful arguments,” said Paskin. The group now has over 1,500 members. “We want people to respond to this in whatever way they see fit. AIPAC has been very respectful of our right to protest as we strive to be respectful of the choice they made.”

Olitzky said they did reject one particularly passive proposal that came up in discussions: Just don’t clap.

“We can’t sit idly by and not clap,” he said. “A candidate in favor of registering Muslims, we know what that leads to. Sitting down and not clapping is standing idly by.”

However they choose to absent themselves, the “Come Together Against Hate” protesters will meet for — yes — Torah study at The Greene Turtle sports bar inside the Verizon Center complex where Trump will speak. Paskin said the group had named about 300 “leaders” who would distribute flyers and stickers emblazoned with their slogan.

AIPAC would prefer no protests whatsoever. Earlier this week, an email from a staffer warned students planning to attend that any attempt to disrupt the program would result in removal “and it will be the last AIPAC event you attend.”

AIPAC later said the email was sent without authorization, but an official said the group would prefer not to see disruptions at an event where every presidential candidate had been invited to speak.

READ: David Duke: Trump-Hitler comparisons might be good for Hitler

“AIPAC has a unique function and special responsibility in America — we are the bipartisan stewards of this special relationship” between Israel and the United States, said the official. “Therefore, it is of paramount importance that our community develops a constructive relationship with whomever wins their respective party nomination and thus could be elected president.”

Rabbi Jeffrey Salkin, of Hollywood, Fla, is organizing yet another planned absence from Trump’s speech to be filled with Torah study. He said he had fielded and rejected proposals for more dramatic protests. One was for the twirling of groggers, the noisemakers used in synagogues during Purim – which takes place next week – to drown out mentions of  Haman, the villain of the Purim story.

“The action we are proposing is intended to be an alternative to more dramatic and demonstrative protests,” said Salkin, who has about 60 rabbis signed on. “We don’t believe people should stand up and walk out, boo or use groggers.”

Doing something more vociferous “will result in our being ejected and play into Trump’s narrative – we will become part of the story,” he said.

Some protesters,  who object to the pro-Israel group’s positions as much as they do Trump, are unlikely to defer to the conference organizers. If Not Now, a group launched to protest Israel’s actions during its 2014 war in the Gaza Strip, will picket outside the conference while singing songs and engaging in a yet-to-be-determined Jewish ritual.

Trump’s invitation “exposes part of the problem – this is what happens when you have a single issue, focus-on-Israel-at-any-cost organization,” said If Not Now’s spokeswoman, Sharon Rose Goldtzvik. “AIPAC has not said anything to disavow Trump.”

A number of groups have proposed that the protest against Trump come from AIPAC itself. Ameinu, a member of the AIPAC National Council – made up of Jewish groups that consult with the lobby – called on the group to publicly denounce Trump’s “disgusting bigotry, demagogic rhetoric and campaign style” during the conference.

The Reconstructionist movement also called on AIPAC to speak out.

“We call on AIPAC to affirm that we welcome Muslims into the United States and condemn racist statements” during the conference, Rabbi Mordechai Liebling, the director of the Social Justice Organizing Program at the Reconstructionist Rabbinical College, said in an interview. “We would certainly prefer that they rescinded the invitation but we understand that might not be possible.”