From left to right, Israelis sour on ‘opportunist’ Donald Trump 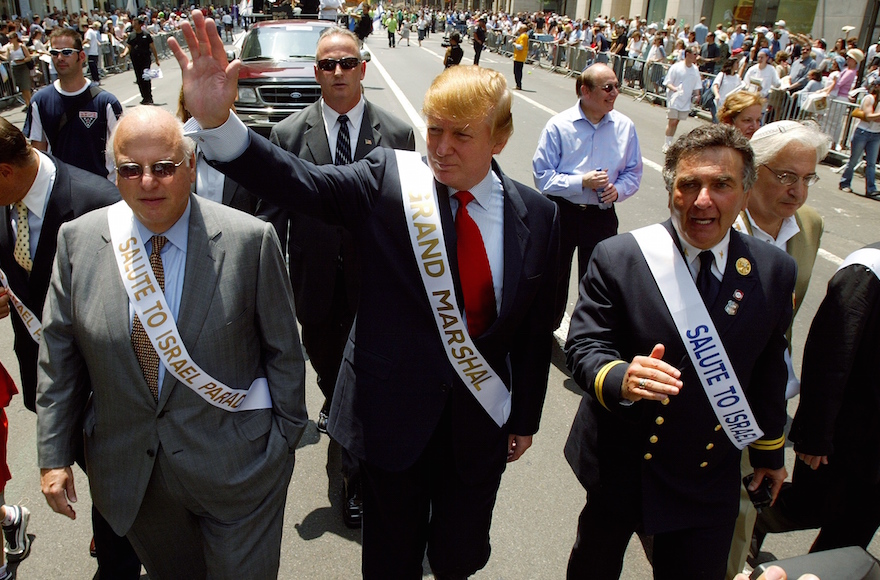 Left and right, religious and secular, Arab and Jew, Israelis don’t have many kind words for Donald Trump, the Republican presidential front-runner.

In interviews this week, several prominent Israelis described Trump as an opportunist and a demagogue whose political convictions are hard to make out.

“As Israelis, we look at him and laugh a little,” said Ronen Shoval, founder of the hard-line, right-wing Zionist organization Im Tirtzu. “He looks inauthentic. Men in Israel don’t color their hair like that. He looks like he’s had plastic surgery.”

Trump had created unease among pro-Israel activists by insisting he would remain “neutral” in brokering Israeli-Palestinian peace. (He softened that position in a well-received speech Monday to the American Israel Public Affairs Committee in Washington, D.C.)

In response, Trump has pointed to his role as grand marshal of New York’s 2004 Salute to Israel Parade and his Orthodox Jewish daughter and grandchildren as evidence of his pro-Israel bona fides.

According to a poll in February by the Israel Democracy Institute, three-fifths of Israeli Jews said a Trump administration would be friendly to Israel. A survey by the Israeli news website Walla found that Israelis preferred Democratic front-runner Hillary Clinton to Trump by a margin of 38 to 23 percent. Clinton challenger Bernie Sanders, who is Jewish, received 7 percent support, while Republicans Ted Cruz and Marco Rubio received 5 and 4 percent, respectively. Twenty-three percent did not choose a candidate.

Like many Americans concerned by Trump’s apparent encouragement of violence at his rallies and his support among white supremacists, Israelis who spoke to JTA focused more on the candidate’s character than his specific policies.

Some Israelis praised Trump’s willingness to speak bluntly, no matter the consequences. Shoval said Trump reminds him of former Israeli Foreign Minister Avigdor Liberman, another plain-talking politician who has drawn accusations of racism for his call to have Israeli Arabs live in a Palestinian state under a future peace deal.

But others worried that Trump’s seemingly off-the-cuff convictions could change once he’s in office.

“The problem is that there isn’t a feeling you can trust him,” Cherlow said. “You can’t know if he’s going to do what he says. He’s not obligated to anything.”

On the left, Israelis are just as mistrustful — and less enamored by his frankness. Columnist Nahum Barnea has written that Trump is a threat to America’s democratic values and compared him to Oren Hazan, a scandal-plagued Likud lawmaker accused of bringing clients prostitutes and drugs when he managed a casino in Bulgaria.

Speaking to JTA, Barnea said Trump could be dangerous to the U.S.-Israel relationship because he’s less of a known quantity than Clinton and has weaker ties to America’s pro-Israel community.

“I think Trump is unpredictable and unobligated,” Barnea told JTA. “Hillary Clinton is predictable and obligated. The prime minister of Israel will feel comfortable with a president whose actions he can expect.”

According to Shoval, Israelis look for consistency in their ideologues and suggested that Likud voters would prefer Ted Cruz, the arch-conservative Texas senator and Trump’s closest competitor for the Republican nomination.

“Israeli society is very ideological, and Trump is viewed in Israel as an opportunist and not ideological,” Shoval said.

Israeli Arabs appear to be less engaged with the Trump phenomenon than their Jewish neighbors. Nearly half told the Israel Democracy Institute they “didn’t know” whether Trump would be friendly to Israel. Among the some 100 Israeli Arabs polled by Walla in March, a mere 7 percent supported Trump.

“From the perspective of Palestinian citizens who live in Israel, he’ll just make the situation more extreme,” said journalist Ghada Zoabi, who runs the Arab-Israeli news website Bokra. “He won’t take a positive role in leading to peace. He’s not a man of peace. He wants to celebrate the existing conflict.”

Yisrael Friedman, editor of Yated Neeman, a leading haredi Orthodox publication, said haredi Israelis have mostly been ignoring the Trump campaign out of a belief that God — not the president — controls matters of state.

“America seems to have gone crazy,” Friedman said, adding that Trump’s popularity deserves psychiatric examination. But he said only God knows which candidate would be best for the Jews.

“God will play with him like a marionette if he’s elected,” Friedman said. “At this point I’m praying for whatever’s best for the Jewish people. What’s right and good, I don’t know.”