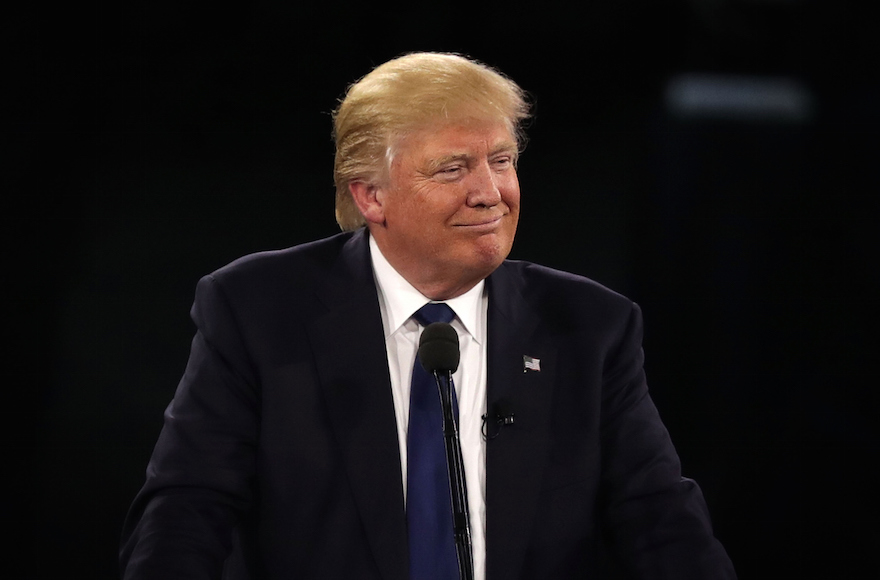 WASHINGTON (JTA) — Donald Trump, staking out a pro-Israel position that had nary a mention of the neutrality he had asserted earlier, earned an enthusiastic response to his speech at AIPAC’s annual conference.

The real estate billionaire and front-runner for the Republican presidential nomination, speaking Monday to the American Israel Public Affairs Committee, softened two positions that have created unease among pro-Israel activists — his insistence on remaining “neutral” in brokering Israeli-Palestinian peace and his refusal to commit to recognizing Jerusalem as Israel’s capital.

On Jerusalem, Trump vowed to move the American embassy to the city, “the eternal capital of the Jewish people.” And he said the Palestinians must accept as a given the closeness of the U.S.-Israel relationship.

Trump opponents who had said they would protest the speech because of his broadsides against minorities and his sanctioning of political violence were not visible during his speech, which earned repeated standing ovations.

Trump’s enthusiastic embrace of pro-Israel orthodoxy appeared to resonate with the AIPAC activists at the Verizon Center, and the loud applause inside the Washington, D.C., arena was not the only indication. Immediately following Trump’s speech, Sen. Ted Cruz, R-Texas, his closest rival in the presidential race, scored Trump for pledging neutrality on Israel and for not promising to “shred” the Iran deal upon election. Both gibes fell flat.

Trump delivered broadsides against his likely rival in the general election, Hillary Clinton, calling her a “total disaster” and blaming her for last year’s Iran nuclear deal.

The line earned laughter and applause, although Clinton’s speech earlier in the day was well received.

His rhetorical flourishes at the United Nations’ expense were crowd pleasers, too.

His biggest applause line was when he began a sentence, “With President Obama, in his final year – yay!”

AIPAC led opposition last year to the Iran nuclear deal and clashed repeatedly with the Obama administration in its unsuccessful bid to have Congress to nix the deal.

In her speech, Clinton earned applause for decrying Trump’s insults during his campaign against Mexicans, Muslims and others.

Trump in his address notably avoided some of the generalizations he has used to describe ethnic and religious groups.