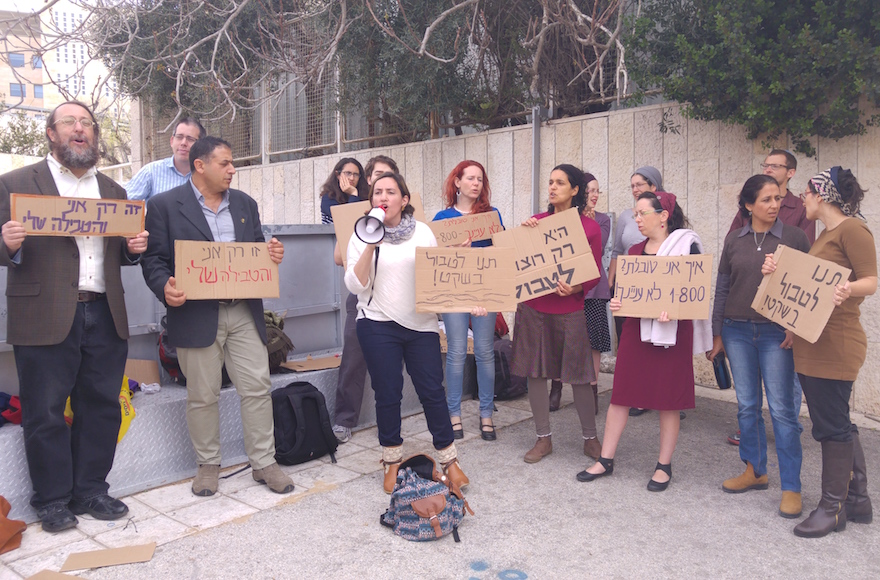 JERUSALEM (JTA) — Without warning, the ritual bath attendant pulled off Naava Shafner’s towel. She was standing, naked, in front of a woman she didn’t know. Then the attendant began interrogating her.

Shafner had gone to a ritual bath, or mikvah, regularly since she married in 2010. Under Jewish law, Orthodox women are required to immerse in the mikvah following menstruation and before resuming sexual relations. Women must be fully bare when immersing, including jewelry. To ensure that women comply, female attendants supervise all of Israel’s government-funded mikvahs.

During the 2013 encounter, which occurred in the central city of Beit Shemesh, the attendant demanded that Shafner take off an irremovable earring. After stripping off Shafner’s towel, the attendant called a local rabbi and initially demanded Shafner go home without immersing. After 15 minutes of arguing, Shafner was allowed to immerse.

It wasn’t the first time Shafner had been mistreated by a mikvah attendant. Attendants had touched her without asking, invasively examined her body and forcibly scrubbed her nails. As a survivor of sexual abuse, she found the incidents particularly traumatizing.

Shafner is one of many women who have complained of mistreatment in Israel’s public mikvahs, alleging disrespectful treatment, verbal abuse and unwanted physical contact from attendants. Women who spoke to JTA recalled being made to immerse up to 20 times in a row or prevented from immersing altogether.

Mistreatment at mikvahs in Israel has entered public discussion this month over a bill that would solidify control of the country’s public mikvahs by the haredi Orthodox Chief Rabbinate.

The measure, which would bar non-Orthodox conversions at public mikvahs and require attendants to obey Jewish law as determined by the Chief Rabbinate, is sponsored by the Orthodox parties and has passed an initial vote in the Knesset. It seeks to override a Supreme Court decision from February mandating that public mikvahs be made available for non-Orthodox conversions.

But activists and many women remain concerned that their mistreatment comes from overzealous mikvah attendants who work in poor conditions with little pay and are beholden to an aloof, male-dominated religious bureaucracy. The system, the women say, has created a culture in which the attendants value stringent interpretations of Jewish law over basic human dignity.

A petition filed to Israel’s Supreme Court last month by Itim, a group that supports Israelis in their encounters with an often complex and unpredictable religious bureaucracy, seeks to have a bill of rights posted in every public mikvah for the attendants to be made aware of the guidelines, and for women to be able to immerse without the supervision of the attendants.

One sticking point is whether women even need an attendant to supervise the immersion.

“The Torah says women are trustworthy on the subject of purity,” said Idit Bartov, a scholar of Jewish law and Itim’s authority on mikvahs.

“Do we check if a man ate steak before he orders coffee in a restaurant?” she asked. “We all give an account to God. That’s who I’m scared of.”

Orthodox women follow a range of Jewish legal opinions at the mikvah, including immersing alone or with a friend. Israel’s chief Ashkenazi rabbi,  David Lau, says an attendant must be present to ensure compliance. Yet in an open letter he issued last week, Lau said attendants should offer their help while honoring women’s wishes if they decline assistance.

Israel’s Religious Services Ministry released guidelines two years ago prohibiting attendants from asking women unwanted intrusive questions and requiring attendants to respect the physical privacy of women who immerse. The guidelines emphasized that the mikvahs exist as a public service and that the women themselves, not the attendants, should determine whether the immersion was kosher.

But the guidelines have met resistance from those meant to enforce them. Rabbi Menachem Blumenthal, who manages Jerusalem’s 40 mikvahs, rejected the idea that a woman could immerse unsupervised. Blumenthal said immersing contrary to the Chief Rabbinate’s guidelines is akin to performing a non-Jewish ritual.

Blumenthal condemned physical or verbal abuse by attendants, and said he has received one or two complaints per month of such conduct. When he receives a complaint, he said, he or a deputy supervisor addresses them in a personal conversation with an attendant. Only four such cases have reached his desk in the past two years, Blumenthal said, and he’s never fired an attendant due to a complaint.

But though women blame attendants for mistreatment, activists say the mikvah employees are also victims. Attendants sometimes work at night,  illegally, for below Israel’s minimum wage of approximately $6.50 an hour. Nechama Shulman, a Tel Aviv mikvah attendant, told JTA she makes about $4 an hour. Attendants are responsible for all aspects of the mikvah’s upkeep, from cleaning the facility to answering the phone to supervising the women who immerse. An interministerial committee was formed six months ago to ensure the attendants receive fair pay.

Shulman said the attendants are often poor and fear losing their jobs if they let a woman break Jewish law. She added that attendants are largely older haredi women, while the women who immerse are often younger and less religious.

“They take women who are often simple, uneducated, lower-class” as attendants, Shulman said. “They’re scared of their own shadow, scared they’ll get fired if [rabbis] find out they let a woman do something wrong.”

Tensions between attendants and mikvah users often flare when women come to immerse before visiting the Temple Mount, a halachic requirement. Some attendants have stopped unmarried women from immersing, citing a commonly held Jewish legal opinion on the unmarried at the mikvah. Others have barred women from immersing based on the opinion that Jewish law forbids setting foot on the Temple Mount.

To sidestep attendants, unmarried women will try to disguise themselves as married, wearing a ring and a headscarf, according to Rivka Shimon, a member of Women for the Temple Mount, which encourages women to visit the site. Others immerse alone in one of the springs surrounding Jerusalem.

“It was degrading,” said Bitya Cohen, who was prevented from visiting the Temple Mount last year after an attendant argued with her for a half hour and stopped her from immersing. “A lot of women walked past and saw me arguing with the attendant. Who has the authority to say what’s permitted and what’s forbidden?”

Some activists have considered avoiding conflict by setting up private mikvahs, independent of the Chief Rabbinate. But they worry the cost will be prohibitive and object on principle to having to pay for something that, according to Israeli law, is a public service.

“The attendant’s place is to say, ‘How do you want your service?’” said Keren Hadad Taub, who founded Advot, a group of women pushing mikvah reform. “Immersion is the responsibility of the woman alone. It’s not a question of Jewish law. It’s a question of services.”