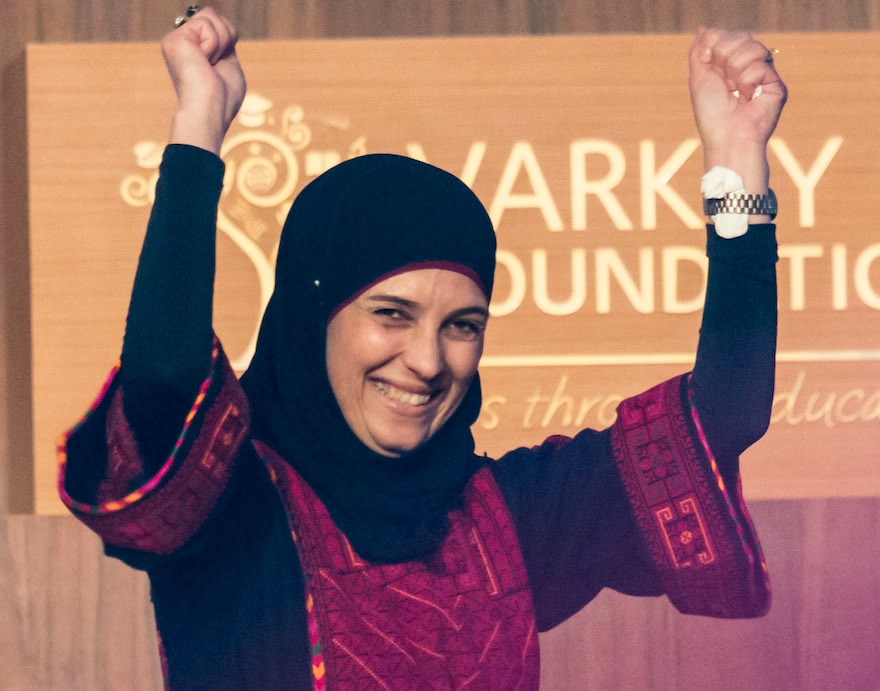 JERUSALEM (JTA) — A Palestinian teacher who won a $1 million prize for teaching nonviolence will keep her award even though her husband participated in a terror attack that killed six Israelis.

Hanan al-Hroub received the U.K.-based Varkey Foundation’s Global Teacher Prize at a ceremony in Dubai earlier this month for a curriculum she called “No to Violence.”

Her husband, Omar, served 10 years in an Israeli prison after being convicted as an accomplice in a deadly 1980 bombing attack in Hebron in which the victims were walking home from Friday night Sabbath prayers, The Associated Press reported. Omar al-Hroub was a chemist who provided chemicals needed for making the bombs, the AP reported.

“The judging process examines the qualities and achievements of the candidates themselves only,” the Varkey Foundation said in a statement, according to the AP.

An article in the Qatari newspaper al-Araby al-Jadid called Omar al-Hroub a “freedom fighter … who took part in one of the most daring guerrilla operations in the occupied territories.”

Qadura Faris, the director of a Palestinian prisoners’ association, told AP that Omar al-Hroub accepted the 1993 Oslo Accords, served as a deputy Cabinet minister in the Palestinian Authority and supports a two-state solution with Israel.

Faris said Omar al-Hroub remains a senior Palestinian official who is close to P.A. President Mahmoud Abbas and “believes in his peaceful approach.”

Hanan al-Hroub, who teaches at the Samiha Khalil High School in al-Bireh, near the West Bank city of Ramallah, developed her nonviolent method after her children witnessed her husband being shot by Israeli soldiers during the second intifada, according to the Times of Israel.

According to the website of the Global Teacher Prize, her curriculum has “led to a decline in violent behavior in schools where this is usually a frequent occurrence; she has inspired her colleagues to review the way they teach, their classroom management strategies and the sanctions they use.”