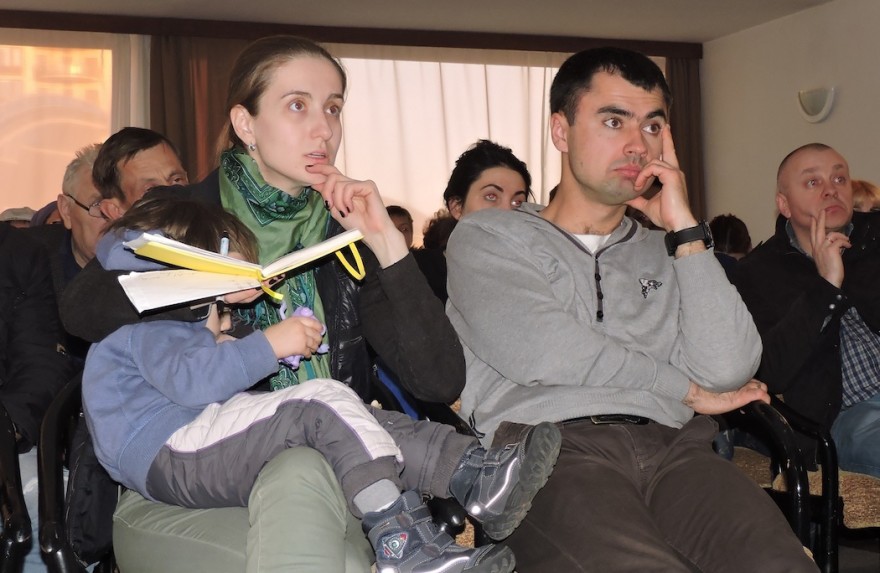 A Ukrainian couple at a pre-flight briefing for immigrants to Israel in Kiev, March 23, 2015. (Ben Sales)
Advertisement

The claims against Christians for Israel, a Netherlands-based international group that recently opened an office in Ukraine,  came from Rabbi Ya’akov Dov Bleich, a chief rabbi of Ukraine, following the airing in the Netherlands Tuesday of a documentary titled “Bring the Jews Home.”

In it, Koen Carlier, a Belgian Christian who heads the Ukraine office, tells an elderly Jewish woman: “You have to go to Israel.” Referring to that scene in an interview published Thursday in the Dutch daily Trouw, Bleich said: “Putting a woman of that age under pressure like that? That is madness.” He nonetheless said that “Israel is the best place to live for a Jew.” Ronny Naftaniel, chairman of the Dutch Jewish Humanitarian Fund, said the Christian group used “misleading scare tactics,” because some of the group’s activists said anti-Semitism posed a long-term threat to Ukrainian Jewry.

But Dutch Chief Rabbi Binyomin Jacobs, who last month completed a five-day fact-checking mission to observe Christians for Israel’s work in Ukraine, told JTA Friday the film was biased and took scenes out of context.

The documentary  — by Evangelische Omroep,  a left-leaning religious broadcaster that has frequently taken a critical view of Christians for Israel — said Christians for Israel, which has 20 staff and volunteers in Ukraine, was acting solely out of religious conviction that gathering Jews in Israel would bring about the return of Jesus Christ.

Jacobs said Christians for Israel merely was assisting the Jewish Agency for Israel with Jewish immigration to Israel out of Ukraine, and was also investing tens of thousands of dollars in supporting the Jews in Ukraine, including through food parcels and subsidies for local schools. He said the support was motivated by a desire to atone for persecution of Jews in Europe in the past. “If they were all about aliyah, they would never invest in these other programs,” Jacobs said, using the Hebrew word for Jewish immigration to Israel.

In 2015, over 7,000 Ukrainians made aliyah — a 21-percent rise over 2014. Aliyah professionals attribute the increase to Ukraine’s humanitarian and financial crises following the ousting in 2014 of former president Viktor Yanukovych in a bloody revolution.