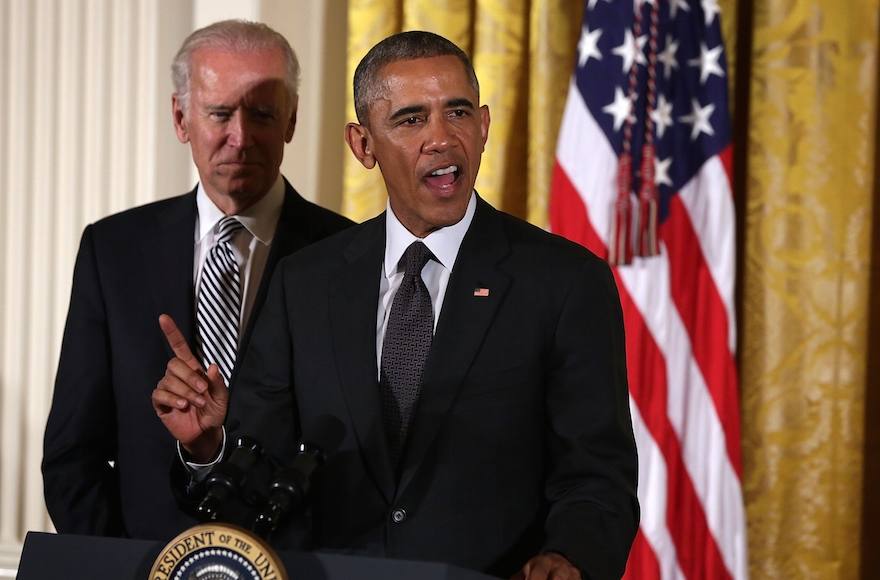 Obama at a news conference Friday ending last week’s nuclear summit addressed reports that his administration would ease sanctions that keep Iran from engaging in dollar transactions in order to bring about benefits to Iran’s economy in exchange for its abiding by the recent nuclear deal.

The U.S. leader said that allowing Iran access to dollars was not necessary. Obama said Iran’s continued misbehavior in test-launching ballistic missiles and backing anti-Israel militants was an “important” factor in inhibiting businesses from trading with Iran despite the implementation earlier this year of the sanctions relief for nuclear rollback deal.

“Iran, so far, has followed the letter of the agreement,” he said.

“But the spirit of the agreement involves Iran also sending signals to the world community and businesses that it is not going to be engaging in a range of provocative actions that might scare business off. When they launched ballistic missiles with slogans calling for the destruction of Israel, that makes businesses nervous. There is some geopolitical risk that is heightened when they see that taking place. If Iran continues to ship missiles to Hezbollah, that gets businesses nervous.”

The sanctions lifted by the United States in the wake of the deal targeted third parties that dealt with Iran. The U.S. has maintained prohibitions on Iran dealing with any U.S. institution, which effectively keeps it from trading in dollars. Reports in The Associated Press and The Wall Street Journal had said Obama was considering allowing some offshore dollar transactions in order to ease pressure on Iran’s economy.

Instead, Obama said at the news conference, U.S. officials would provide assurances to European businesses that they do not face sanctions if they engage in non-dollar transactions with Iran.

“Some of the concerns that Iran has expressed we are going to work with them to address,” he said.

“It is not necessary that we take the approach of them going through dollar-denominated transactions,” Obama added. “It is possible for them to work through European financial institutions, as well. But there is going to need to be continued clarification provided to businesses in order to — for deal flows to begin.”