At Forbes conference in Israel, sitting on pillows and listening to Monica Lewinsky 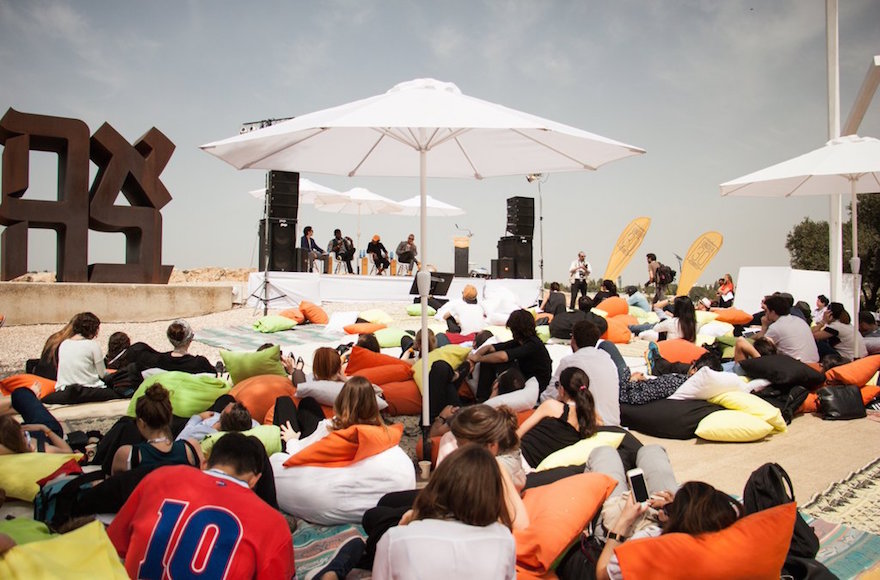 Rappers, entrepreneurs, actors and Monica Lewinsky: Welcome to the Forbes Under 30 Summit in Israel.

Held in Jerusalem and Tel Aviv this week, the Under 30 Summit is the financial magazine’s inaugural international gathering of up-and-coming millennials. The conference spanned food tastings, tours of Tel Aviv’s hi-tech sector and Jerusalem’s historical sites, panels of hi-tech CEOs and social activists, volunteering events and, of course, an interview with President Shimon Peres.

Despite being more than six decades above the conference’s supposed age limit, Peres fit right in. In tone and content, the gathering was less like the defense and diplomacy confabs that dot Israel’s calendar, and more like the President’s Conference that Peres hosted every year of his tenure as Israel’s head of state. Like the President’s Conference, the summit was an energetic, lighthearted gathering of impressive people from a range of fields, all talking about innovation.

Most of the speakers were young movers and shakers. One speaker, Jessica Matthews, has created soccer balls that can power lights by harnessing the kinetic energy of a game. Another, Okieriete Onaodowan, appeared as James Madison in the Broadway musical “Hamilton.”

Every year, Forbes compiles “30 under 30” lists of young entrepreneurs, activists and talents. Categories range from venture capital to music to energy. The magazine decided to host the first-ever 30 under 30 conference for Europe, the Middle East and Africa in Israel because of its reputation as a hi-tech hub.

READ: For parents of soldiers lost in Gaza, the war never ended

The conference’s events also had a millennial feel. On Wednesday, the conference’s mostly 20-something attendees lounged on pillows and scrolled through their phones in a field outside Jerusalem’s Israel Museum as they attended panels about innovation and social media. The dress code ranged from blazers and slacks to T-shirts and jeans. Lots of attendees wore foldable sunglasses handed out at the entrance in small branded pouches.

In the afternoon, the attendees sat in circles amid the museum’s modern art collection, forming discussion groups about how to bridge fields like health technology, cyber security and fashion. When Israel’s six-month-old wave of terrorism did come up over the course of the day, it was only in the context of how innovation could help bring peace. At the morning’s first panel, Onaodowan of “Hamilton” and two other rappers talked about how hip-hop’s raw appeal can transcend boundaries.

One of the few household names among the speakers was Lewinsky, who has transformed herself into an advocate against cyberbullying, nearly 20 years after she was one of the first high-profile victims of Internet hate.

“If you don’t know what I’m talking about, don’t Google it,” she said of the sex scandal. “Come talk to me.”

Lewinsky moderated a panel on how social media and in-person dialogue could bridge gaps between Israelis and Palestinians. While in Israel, she also found time to see the sights. Before beginning the panel, she asked if she was “the only one who fell for the red string” — the thready bracelet beggars give out in Jerusalem’s Old City.

Few in the audience responded — maybe because they were too busy checking their phones.