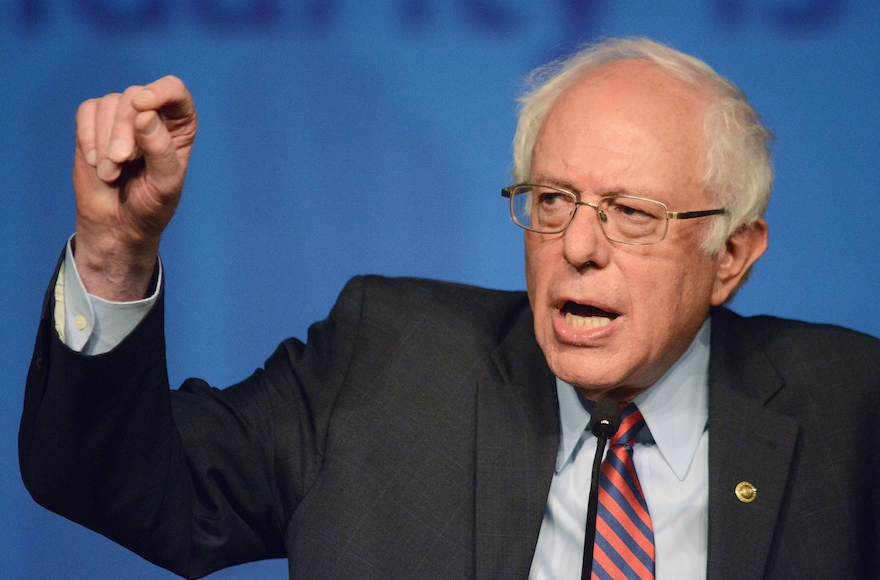 WASHINGTON (JTA) — The Bernie Sanders campaign pushed back against criticism by Israel supporters that the presidential candidate wildly overstated the number of Palestinian civilians killed in the 2014 Gaza war.

“The idea that Sen. Sanders stated definitely that 10,000 Palestinians were killed is just not accurate and a distortion of that discussion,” campaign spokesman Michael Briggs said Thursday in a statement.

Sanders, an Independent senator from Vermont vying for the Democratic nod, suggested the estimate in an interview with the editorial board of the New York Daily News published Monday. He was explaining why he did not support bringing Israelis to the International Criminal Court for their actions during the summer 2014 war against Hamas, although he decried its carnage.

“Anybody help me out here, because I don’t remember the figures, but my recollection is over 10,000 innocent people were killed in Gaza. Does that sound right?” he said.

One of his interviewers checked while they talked and said the number was closer to 2,300 killed altogether and 10,000 wounded. There’s no record of Sanders’ reaction, but Briggs said he accepted the figure.

“Understanding that his recollection was about the total number of casualties, not the death toll, the senator immediately accepted that correction and the discussion moved on to other topics,” he said. “Bringing peace between Israel and the Palestinians will not be easy. It would help if candidates’ positions on this issue are not distorted.”

Michael Oren, a member of Knesset and a former Israeli ambassador to the United States, had called on Sanders to retract the comment, calling it a “blood libel.”

In the statement, Briggs emphasized Sanders’ ties to Israel.

“As many people know, Sen. Sanders, as a young man, spent months in Israel and, in fact, has family living there now,” he said. “There is no candidate for president who will be a stronger supporter of Israel’s right to exist in freedom, peace and security.”

Sanders, the first Jewish candidate to garner wins in major party nominating contests, faces Hillary Clinton, the front-runner, in the New York primary on April 19. Both candidates are emphasizing their New York roots: Sanders his birth and upbringing in Brooklyn, Clinton her eight years as a U.S. senator from the state.

The Anti-Defamation League welcomed the statement by the Sanders’ campaign.

“The senator assured me that he did not mean his remarks to be a definitive statement and that he would make every effort to set the record straight,” said Jonathan Greenblatt, the ADL CEO, after speaking on the phone with Sanders. “We appreciate his responsiveness on this issue, especially at a time when there are many false and incendiary reports blaming Israel for applying disproportionate force in its struggle for self-defense.”

On Wednesday, the ADL had called on Sanders to publicly correct his statement.

Sanders also said in the interview that Israel must better its ties with the Palestinians if it hopes to continue to receive unanimous support from the United States.