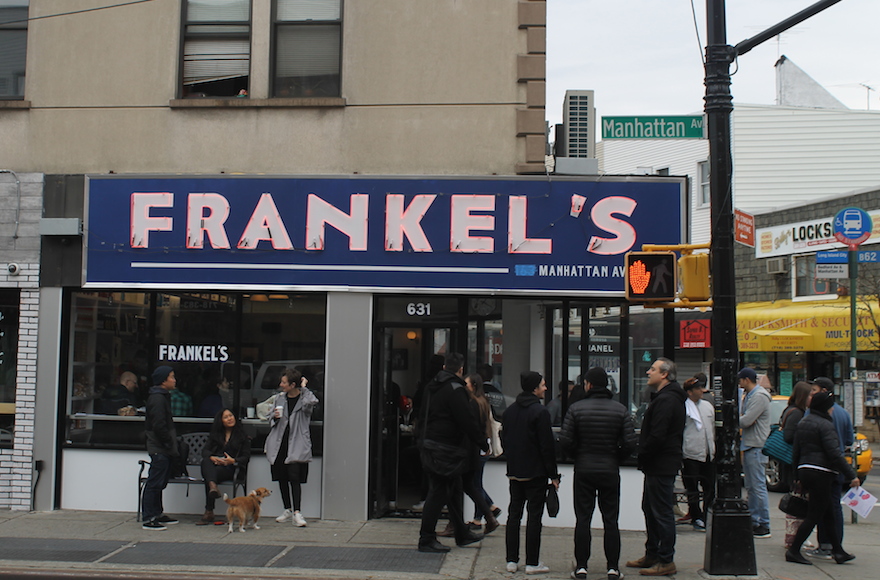 A view outside of Frankel's Delicatessen on its opening day, April 2, 2016. (Gabe Friedman)
Advertisement

NEW YORK (JTA) — The scene could easily have been mistaken for a rock concert at one of Brooklyn’s countless music halls.

Smartly dressed 20- and 30-somethings crammed into a small corner building. The overflow crowd, clad in skinny jeans and black beanies, spilled onto the sidewalk, where they drank coffee and smoked cigarettes beneath the joint’s bright neon sign.

But these cool kids — unperturbed by the rainy, chilly weather — weren’t lining up for the latest underground act. Rather, the crowd was assembled for the opening of Frankel’s Delicatessen, a new eatery at the nexus of Greenpoint and Williamsburg, probably the hippest burgs in the city’s hippest borough, Brooklyn.

READ: The rise of ‘Jewish-slash-something else’ restaurants

At Frankel’s, which opened last Saturday, the rock-and-roll vibe starts at the top — perhaps because one of brothers who co-owns the place, Alex Frankel, is an actual rock star. He’s one-half of the influential dance-music duo Holy Ghost!, which has worked with the likes of Katy Perry and Moby. The Frankels can count friends like El-P, a self-described “half-Jewish” music producer who is part of the popular group Run the Jewels, among the deli’s investors.

But this isn’t just some halfhearted attempt to cash in on Brooklyn’s cultural cachet, the Frankel brothers insist. 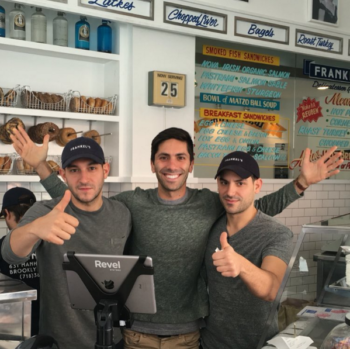 “I know, for some people, that we’re both really young and we live in Williamsburg, they might have this idea that we’re two hipsters opening a restaurant,” said Zach Frankel, 29. He may not actually be in an indie band but with his Chuck Taylors, five o’clock shadow and smattering of tattoos, he certainly looks the part.

“But for us, we see it as trying to start a small family business,” he said with no apparent irony.

Just two days prior to their deli’s highly anticipated opening, Zach Frankel sat down with JTA inside the small restaurant space. Workers were busy assembling the neon Frankel’s sign in the window while Alex Frankel, 33, was busy moving around sandwich ingredients and vats of matzah ball soup.

Frankel’s is the latest manifestation of a surprising Jewish deli renaissance that has gained momentum in New York City over the past few years. Sadelle’s, a part-appetizing, part-sandwich shop that opened in Soho last fall, and Harry & Ida’s Meat and Supply Co., a quirky East Village deli that opened last June, both have garnered rave reviews. Shelsky’s, a smoked fish and appetizing shop in Cobble Hill, also in Brooklyn, expanded in 2014 after three years in business. Mile End Delicatessen, which re-creates the Montreal Jewish deli experience in Brooklyn, opened a second location in Manhattan in 2012.

And the old-timers are doing well, too: The Lower East Side fixture Katz’s Deli — yes, the place of “When Harry Met Sally” fame — will expand to Brooklyn this fall; Russ and Daughters, the century-old appetizing shop, opened an upscale, sit-down location in 2014, followed by an outpost at the Jewish Museum in February.

While all the new delis share an old-meets-new appeal, there are some differences, too. Frankel’s is sticking to the Jewish food classics for now — smoked fish and pastrami sandwiches, bagels, hot dogs and matzah ball soup — while Harry & Ida’s serves maple-smoked pastrami with buttermilk-fermented cucumbers and an anchovy-and-lemon mustard.

But they all aim to make Jewish food a mainstream delicacy — and, if possible, cool.

Ted Merwin, author of “Pastrami on Rye: An Overstuffed History of the Jewish Deli,” said these delis have created a “nouveau ghetto” appeal.

“It’s a version of a past generation’s experience without the grittiness,” said Merwin, a professor at Dickinson College.

This new, hip crop of delis is a far cry from the grimier hole-in-the-wall eateries of yesteryear. Back in the 1930s, Merwin said, there were some 1,500 Jewish delis across the five boroughs. A high proportion of them were kosher (Frankel’s is not) and didn’t mix fish and meat — hence the arrival of appetizing-only smoked fish and bagel shops.

Merwin links the decline of deli culture to Jewish migration to the suburbs in the 1960s and ’70s. Jews began buying their brunch food at supermarkets and also started to view deli fare, which is loaded with salt and fat, as one of the “unhealthiest things you can put in your body,” he said.

By the late 1990s, Merwin estimates, there were only about 15 kosher delis left in New York City.

By contrast, the new delis are “destination restaurants,” he said — places that are trying to strike a balance between mining New York’s rich Jewish history and thriving in the city’s competitive, expensive food world.

“There is this appeal to nostalgia that’s going on, but there’s also this sense that Jewish food is suddenly very popular again,” Merwin said. “They have to kind of hit that sweet spot between nostalgia and appeal to non-Jews.”

Frankel’s appears to have located that spot: The interior is sleek and modern, with subway-tiled walls and white shelving. Yet behind the deli counter hang black-and-white photos of past generations of the Frankel family — a clear homage to their Jewish New York lineage. 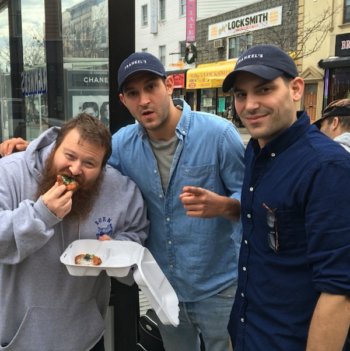 Rapper Action Bronson, left, chowing down on some Frankel’s fare with the Frankel brothers, Zach, right, and Alex. (Screenshot from Instagram)

Frankel’s Instagram page — even the fact that the deli has an Instagram page — is a testament to the deli’s cross-generational, cross-ethnic appeal. In its first week, the eatery attracted everyone from a Holocaust survivor from Queens to the acclaimed rapper Action Bronson, who has a Jewish mother and also hosts a food show on Vice’s new TV channel.

One of the deli’s first promotional graphics plays off the Levy’s rye bread campaign of yore: “You don’t have to be Jewish to love Frankel’s” reads the caption of a picture of a smiling hipster type who’s about to bite into a pastrami sandwich.

As for the brothers Frankel — who consider themselves “not very religious” — they say they’ve been “obsessed” with deli food since they were little. That’s partially thanks to a particularly fertile home turf: Manhattan’s Upper West Side has a number of famous Jewish eateries, including Barney Greengrass and Murray’s Sturgeon Shop.

“We didn’t necessarily look forward to sitting in temple for 12 hours, but we looked forward to the breakfast afterward,” Zach said.

Zach Frankel — who worked as a chef at the Israeli restaurant Jack’s Wife Freda in SoHo — said he had fantasized for years about opening his own deli. He may not be the first Frankel to realize that dream: Family lore has it there was once a Frankel’s Deli a couple of generations ago, though for now the claim is unsubstantiated.

However, the brothers’ grandfather had owned a store, Frankel’s, which sold women’s clothing. The pair drew inspiration from the shop’s stationery when designing the deli’s look and feel. (This updated-retro aesthetic, though crisp and appealing, may lack a bit in originality: Some of the interior signage at Frankel’s initially featured the exact font used at the new Russ and Daughters. By the restaurant’s opening, however, it had been changed.)

“We’d be honored to be in the same sentence as [Russ and Daughters],” Zach said. “So I don’t see them as competition and I hope that they don’t view us as competition. I hope that we’re welcomed into that family.”

For now, the Frankel brothers are trying their best to tune out the celebrity buzz and focus on producing the best brisket and matzah ball soup they can.

They acknowledge that having a great food isn’t always enough. After all, a place like Kutsher’s Tribeca — an upscale eatery that riffed off the legendary, now-shuttered Borscht Belt resort — quickly closed despite rave reviews.

But the multicultural buzz that Frankel’s has generated isn’t something that should be written off too easily.

“Some of my closest friends who are the most excited about this are not Jewish,” Zach said. “I think Jewish food is something that holds no prejudice towards anyone.

“I’ve got friends of every ethnicity, and they all love pastrami just the same.”

CORRECTION: A previous version of this article incorrectly stated that the producer El-P and the rapper Action Bronson are not Jewish. El-P is “half-Jewish” and Action Bronson has a Jewish mother.