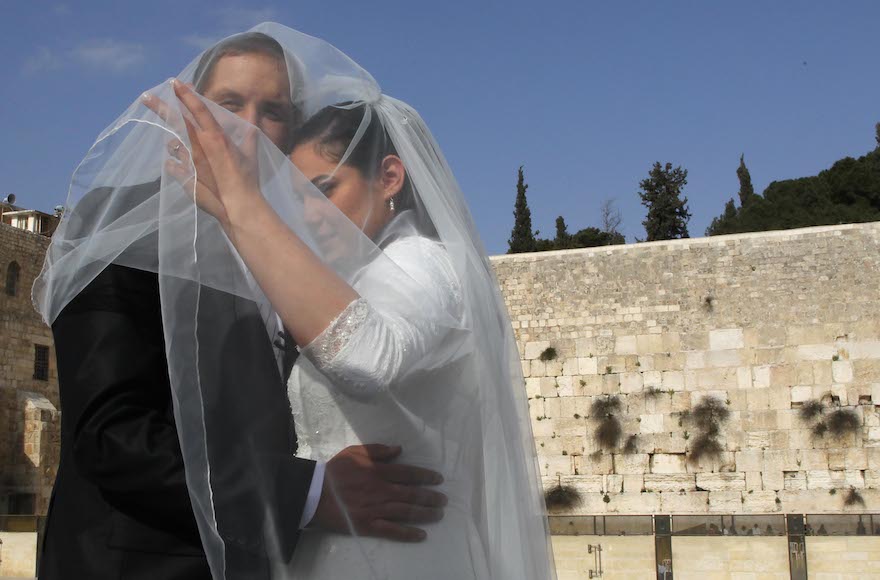 TEL AVIV (JTA) — Sixty percent of Israeli Jews support the work of American Jewish coalitions whose goal is to advance civil marriage in Israel, according to a new poll.

The survey released Monday by Hiddush, an Israeli organization that aims to advance religious pluralism, found that nearly one-third of Israelis strongly support U.S. Jewish involvement in the marriage debate, while 28 percent moderately support such involvement. Israel allows only Orthodox marriage for Jews in Israel, though solid majorities of Israeli Jews have for years favored instituting civil marriage.

In addition, the poll found a majority of Israeli Jews believe Israel should take Diaspora Jewry’s views into consideration when setting religious policy. Fifty-three percent of Israeli Jews support that position, with 47 percent opposed. Majorities of voters for all of Israel’s centrist and left-wing parties support considering Diaspora views.

Religious Israelis, however, are opposed to taking Diaspora views into account. Sixty-one percent of religious Zionist Israelis oppose consideration of Diaspora views, as do 73 percent of haredi Orthodox Israelis.

The debate over prayer arrangements at the Western Wall, a major focus of American Jewish organizations, ranks last in Israeli Jews’ list of religious priorities, according to the poll. Only 3 percent of respondents see it as the most important issue, while 8 percent rank it second.

The Western Wall debate has been in the public eye in Israel following a government decision in January to expand and upgrade the non-Orthodox prayer space there. Following a backlash from haredi Orthodox political parties, however, the government is reexamining the decision and its status is unclear.

“The battle over freedom of worship at the Western Wall is clearly a justified and important battle,” Rabbi Uri Regev, Hiddush’s founder, said in a statement issued Monday. “However, if the Jews of the Diaspora are interested in strengthening their partnership with Israeli Jews, it is critical to understand that Israelis attach far greater importance to the struggle against the Orthodox monopoly over marriage and divorce.”

Some 500 Israelis were contacted by Hiddush on March 29. The survey has a margin of error of plus or minus 4.5 percentage points.