The Hasidic bloc vote, Bernie and Hillary’s Empire State of mind and other NY campaign notes 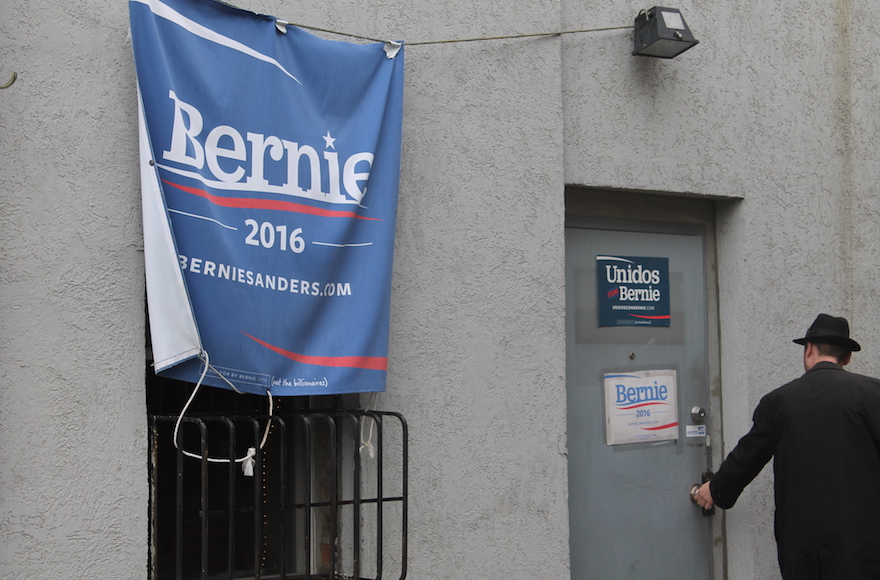 The Sanders campaign's New York headquarters is in an unassuming windowless office in Brooklyn accessible at the back of a small parking lot. (Uriel Heilman)
Advertisement

NEW SQUARE, N.Y. (JTA) – Jewish voters are all over the map when it comes to their plans for voting in New York’s presidential primary on April 19.

Except for New Square, the all-Hasidic village of 8,000 in Rockland County, about 30 miles north of Manhattan. In this insular haredi Orthodox community led by the Skverer rebbe, David Twersky, many residents simply wait for voting instructions from the kehilla, the body that supervises communal affairs.

“We make a bloc vote,” said one Hasidic man who requested anonymity. “Whatever they say, we vote. It’s not for us to decide. The kehilla decides.”

Though this community is devoted in large part to keeping the outside world at arm’s length – the entrance to the village is marked by a “No outlet” sign – on Election Day New Square residents take their civic responsibility very seriously, from yeshiva students to mothers commandeering infants in double strollers.

“We feel we do something to help the whole community when we vote,” said the Hasidic man, who was interviewed in the basement of the village’s main yeshiva study hall. “All the politicians know how it goes in New Square.”

As of last Friday, community members said, the kehilla committee had instructed registered Democrats to vote for Hillary Clinton but had yet to announce its candidate in the Republican contest.

With 291 New York delegates up for grabs, Clinton and rival Democratic candidate Bernie Sanders have been jockeying over who is the more authentic New Yorker.

Sanders, who is Jewish, is from Brooklyn and has that unmistakable accent. But he hasn’t lived in the Big Apple since the late 1960s, and last week he blundered when he said it takes a token to ride the subway. The system hasn’t accepted tokens since 2003.

Clinton moved to New York in 2000, on the eve of her Senate campaign, and represented New York in the Senate for eight years. She knows you need a MetroCard to ride the subway but didn’t seem to know how to swipe one; it took her five tries to get in when she took a very public ride on the train last week. And Clinton, whose accent still bears traces of her Chicago roots, has never quite managed to shake her reputation as a carpetbagger.

Both candidates have their headquarters in Brooklyn, New York’s most populous borough and, starting a few years ago, its hippest. But the similarities end there.

The Sanders campaign office is in Gowanus, a neighborhood that, like the candidate, combines gritty and trendy, with auto mechanic garages bumping up against cool coffee shops. The Sanders HQ itself is almost hard to find, accessible only through a parking lot where a crooked Bernie banner hangs on a back building. Inside, the windowless office doesn’t look like much, but a steady stream of volunteers heads in and out.

READ: At Jews for Bernie event, anger boils over at Sanders campaign

The Clinton campaign headquarters in downtown Brooklyn couldn’t be more establishment. Located in a high-rise office building with multiple security guards, it is  around the corner from a street that bears the same last name as the candidate (presumably named for New York’s sixth governor, DeWitt Clinton). Clinton’s campaign office is open only to those with a prearranged appointment. I didn’t have one and didn’t get in.

On the Republican side, Donald Trump was raised in Queens and lives in Manhattan. But he eats pizza with a fork – a cardinal sin that some New Yorkers view as more reprehensible than what Trump has said about immigrants, Muslims and Democrats.

Rochel, a 63-year-old from the Crown Heights section of Brooklyn — like most of the Orthodox Jews approached on the street by a reporter, she declined to offer her last name — is leaning toward voting Trump for president.

But you wouldn’t necessarily know it to speak with her.

“I think Trump is a maniac. He’s coarse and gruff and inappropriate and an embarrassment to the country,” Rochel told JTA in an interview, excusing herself because, she said, she doesn’t like to say anything bad about people.

“But” she went on, “because of his business expertise and his no-nonsense approach and the fact that, like Michael Bloomberg, he doesn’t have his hands tied by people sponsoring him and doesn’t owe any political favors, if I look past his ‘grubkeit’ [coarseness], he has a good head on his shoulders.”

Norman, a 60-year-old Orthodox man in the Kew Gardens Hills neighborhood of Queens who also did provide his last name, said he, too, might vote for Trump for president.

“I don’t think Trump is as big a meshugana as people say,” Norman offered. “And anyway, there’s a limit to what he can do.”

But neither Rochel nor Norman is planning to vote next week. Like many Jews whom JTA encountered on New York’s streets, they don’t bother to vote in primary elections.

Ted Cruz flew to Las Vegas on Saturday to deliver a speech to the Republican Jewish Coalition’s spring leadership meeting at The Venetian resort. It was an important campaign stop for Cruz because the RJC’s biggest backer is casino magnate Sheldon Adelson, who happens to be the biggest political donor by far to Republican candidates. (Adelson had to leave the confab early to attend a wedding.)

But Cruz got nearly as much attention last week for a drop-in at the Chabad Neshama Model Matzah Bakery in south Brooklyn. The senator from Texas looked a bit out of his element in his buttoned-up navy blue suit as he leaned over a flour-covered table to roll matzah dough while overenthusiastic Chabadniks pushed in on the candidate and urged him to join in their song: “Roll, roll, roll the matzah dough.”

Most of the other bakers were 3 years old.

Cruz was asked if he wanted holes in his matzah – a mainstay of the bread of affliction. Cruz assented. The song resumed, slightly modified: “Make, make, make the holes.”

As they worked to perforate the dough, Cruz cracked a joke that killed in the room, according to an account of the event in The New York Times.

“That is a lot of holes,” Cruz praised a little girl nearby. “It’s hole-y matzah. There we go!”

The event wrapped up with a rendering of the Passover song “Dayenu” before Cruz continued on to his next event: a more adult-oriented meeting at the Jewish Center of Brighton Beach.