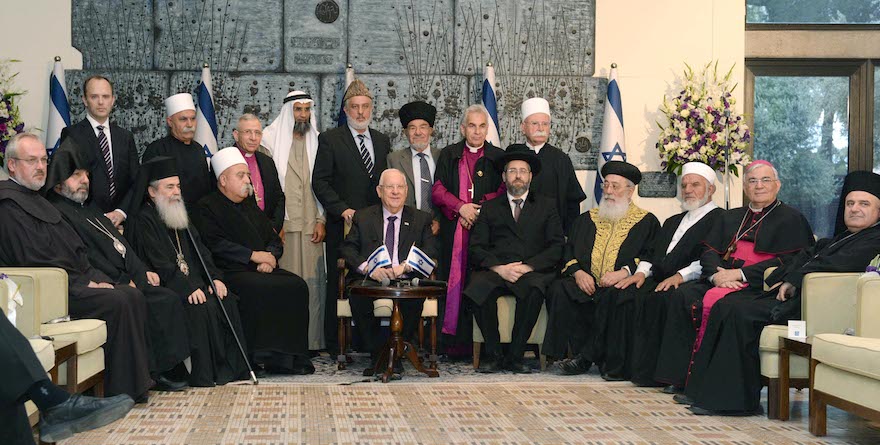 “This place, our home, is engulfed in the flames of incitement some of which originates in the words of well known, and senior religious leaders, who purport to speak in the name of religious truth,” Rivlin said at the Wednesday gathering at his residence, according to a news release issued by his office.

Noting that the State of Israel “is committed and obligated to the well-being of all faith communities, and to the freedoms of worship and religion,” Rivlin emphasized that the government is committed to maintaining the status quo at the Temple Mount, under which only Muslims are permitted to pray there.

Rumors that Israel planned to change the status quo, exacerbated by the increasing visibility of far-right Jewish activists visiting the area and clamoring for the right to pray at the Jerusalem holy site, sparked the wave of Palestinian violence that began in October.

A day before his speech, a far-right Jewish group announced it had officiated at a Jewish wedding ceremony on the contested site where Judaism’s ancient temple once stood, which is also one of Islam’s holiest sites. The wedding, held covertly, was in violation of Israeli law.

“This meeting is not ceremonial,” Rivlin said. “We are dealing here with human lives; with the blood that has been spilled, and with the blood that God forbid may yet be spilled. This is a moment of genuine crisis, and the obligation to avert the outbreak of violence which threatens the innocent, rests upon the shoulders of each and every one of us. Any incitement and utterance has the ability to ignite this entire region, and sadly our land is burning. We cannot simply wash our hands if we do not take responsibility, each of us before our communities.”

Rivlin noted that Passover, the Orthodox Easter and the Muslim festival of Nabi Shuyab “have more than once turned into flashpoints of tension, friction, and violence. In particular this is true of this city, holy to us all, the city of Jerusalem.”

The meeting concluded with a joint statement by the Council of Faith Community Leaders in Israel, which read in part that its members “hereby declare our commitment to the sanctity of life, and denounce all forms of physical or verbal violence against the innocent, in particular instances when such acts are committed in the name of religion, which are a desecration of the Name of God. We believe in full faith, that in the State of Israel, there is place for us all to live in mutual respect, security, peace, each one according to their belief and faith.”