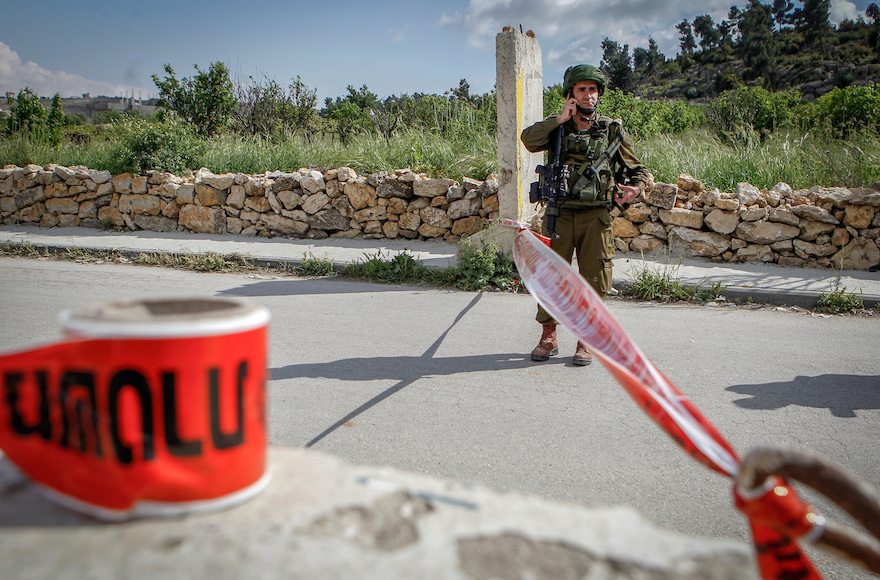 An Israeli soldier at the scene where a Palestinian man attacked an IDF soldier near the Al-Aroub refugee camp north of Hebron, in the West Bank, April 14, 2016. (Wisam Hashlamoun/Flash90)
Advertisement

TEL AVIV (JTA) — It began almost out of nowhere. No one organized it. Israelis weren’t even sure whether to call it an “intifada.” Now, six months later, the wave of stabbings and shootings that has gripped Israel is ebbing.

According to monthly reports by the Shin Bet intelligence agency, the rate of Palestinian terror attacks has been dropping steadily since the upsurge began last October, from 620 attacks that month to 123 in March. Most of those were Molotov cocktails thrown in Jerusalem and the West Bank.

The March number was the lowest since last July, two months before Israeli-Palestinian clashes escalated. Briefing Israel’s Cabinet on Sunday, a Shin Bet official said March saw just 20 “significant” terror attacks — such as stabbings or shootings — down from 78 in October.

“This trend could reverse itself, but we know that it has been achieved up to now as a result of the government’s strong, responsible and methodical policy,” Israeli Prime Minister Benjamin Netanyahu said at the Cabinet meeting, praising “the combined offensive and defensive effort that has led to the terrorists’ succeeding less.”

No one is sure of what has led to the decline — or what could prevent another escalation. The Israel Defense Forces points to its focused operations in the West Bank to stop and arrest would-be attackers. But analysts say that after half a year of small-scale attacks with a relatively low Israeli fatality rate, momentum among would-be terrorists has simply run out.

“This wave has proven itself to be ineffective, causing more damage to the attackers than the victims,” said Boaz Ganor, executive director of the International Institute for Counter-Terrorism at the Interdisciplinary Center-Herzliya. “Every attack was a model for others. Now that there are fewer, there’s less incentive to commit more.”

The current terror wave began in September with clashes on the Temple Mount, revered by Muslims as the Noble Sanctuary. Israel banned a Muslim women’s protest group from the site, and days later Israeli security forces raided the mount, discovering an explosives cache. After weeks of clashes, terrorists killed a Jewish couple, Rabbi Eitam and Naama Henkin, on Oct. 1 as they drove with their four young sons to their West Bank home. It would be the first of a series of Palestinian attacks against Israelis.

In the six months that have elapsed, Palestinians have committed more than 300 attacks against Israelis — mostly stabbings by young assailants. Thirty-four civilians have died in the attacks. About 200 Palestinians, most of them assailants, were killed by police or bystanders while carrying out attacks.

“This troubles me very much. This is unacceptable,” Abbas said in the interview. “When a child doesn’t see hope for peace, what will he do? Tell me, what can this child do?”

The IDF responded to the attacks with a policy dubbed “maximum focus” — preventing terror at flashpoints while avoiding collective punishment of Palestinians. The military has arrested about 2,000 Palestinians since October in nightly raids and targeted underground weapons factories. It has also confiscated equipment from at least four Palestinian TV and radio stations accused of inciting violence.

Also, the IDF set up temporary checkpoints around three main terror hotspots across the West Bank, increased its manpower there and reinforced bus stops with concrete blocks to prevent car-ramming attacks. In Jerusalem, the Israel Police added 800 officers to its force in September for a total of 3,500. It plans to add several hundred more as Passover approaches.

Israel has refrained from the blanket security measures it used during the second intifada 15 years ago, such as curfews or closures of entire cities. In addition, Israel announced an additional 30,000 work permits for West Bank Palestinians in February in a bid to improve the economy and disincentivize attacks.

“I won’t hurt a whole population because one terrorist came from there,” an IDF official, who requested anonymity per army protocol, told JTA. “We want to create stability and a working texture of life. We want to go back to what existed before October.”

While experts praise the army’s restrained approach, they say the decline in attacks has more to do with a lack of organization and a sense among Palestinians that the attacks haven’t achieved any objectives, however ill-defined. During the second intifada, a series of planned, coordinated attacks damaged the Israeli economy and, for a time, shut down Israeli street life. This year’s random, low casualty attacks are not having the same effect.

Amidror cautioned that because they are uncoordinated, lone wolf attacks could start up again as quickly as they stopped. Leading up to Passover, Israeli officials have taken steps aimed at preventing renewed clashes at the Temple Mount.

“It’s a kind of terror you can’t prevent,” Amidror said. “There’s no way to stop a person who gets up and says, ‘I’ll kill two Israelis and I’ll die.’”

According to a March survey by the Israel Democracy Institute, two-thirds of Israelis fear being attacked. But Shlomo Brom, former director of the IDF Strategic Planning Division, said Palestinians won’t risk a near-certain death just to cause Israelis anxiety.

“The only quote-unquote achievement is a terrible mood in Israel,” Brom said. “It could be there’s a [Palestinian] idea that if our mood is shit, the Israelis should feel bad. I don’t know if that’s a reason to sacrifice your life.”