In Europe, the far right doesn’t quite know what to make of Trump 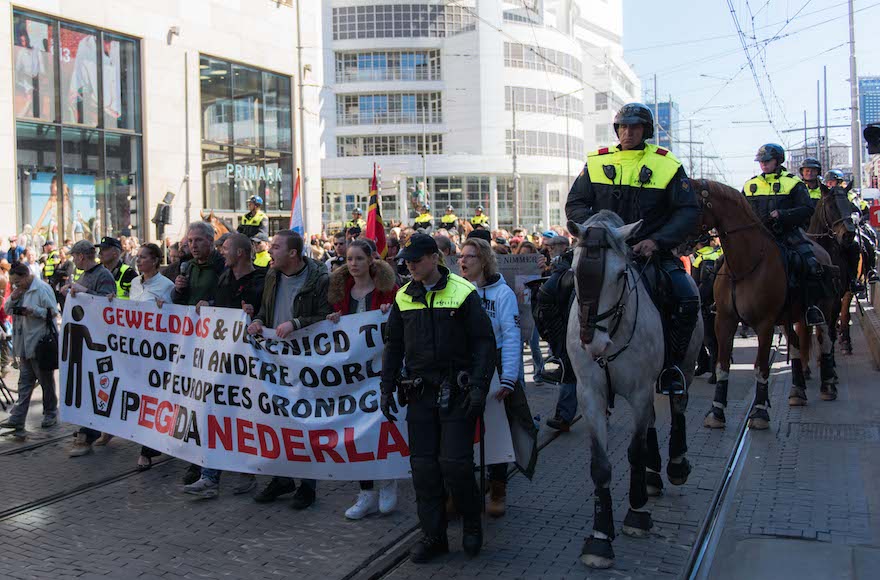 Demonstrators protesting against the arrival of Muslim immigrants to Europe at a PEGIDA event in The Hague, the Netherlands, April 10, 2016. (Cnaan Liphshiz)
Advertisement

THE HAGUE, Netherlands (JTA) —  Donald Trump’s xenophobic views are neither new nor particularly shocking in Europe, where fears of jihadism and the challenges of illegal immigration are blowing winds into the sails of a rising far right.

Although the Republican presidential hopeful’s statements on immigrants, Mexicans and Muslims are often quite moderate in comparison to the rhetoric of some popular European nationalists, Trump’s anti-immigrant rhetoric and anti-establishment image have earned him a certain following in European far-right circles.

“I hope Donald Trump will be the next US President,” Geert Wilders, a far-right Dutch politician whose party has for months been leading in the polls, wrote on Twitter in December. “Good for America, good for Europe. We need brave leaders.”

Yet many of Wilders’ supporters and those of other far-right politicians in Europe say they are nonetheless put off by Trump’s perceived crassness, flashy commercialism and unpredictability.

READ: Geert Wilders and Dutch Jews — end of the affair?

“I think Donald Trump is a very dangerous man,” Pieter Grun, a Wilders voter, said earlier this month at a rally here against Muslim immigration into the Netherlands.

Trump “gets it right on Islam but is so irrational that he could lead us into a nuclear war,” said Grun, who was holding up a sign reading “RapeFugees stay away, not welcome.” “I don’t want his little fingers on the trigger.”

Grun’s doubts about Trump are shared by some of the leaders of the European far right. Sweden Democrats leader Jimmie Akesson told Breitbart of Trump: “He’s great at making speeches, but as a politician and a world leader? No, I don’t think that’s a very good idea.”

Nigel Farage, the leader of Britain’s UKIP far-right party, distanced himself from Trump following the candidate’s controversial call in December for a “total and complete shutdown of Muslims entering the United States.”

“With this comment he’s gone too far,” Farage said, adding it would be “punishing a lot of very good people because of the actions of a few.”

“Seriously, have you ever heard me say something like that?” she demanded when questioned about Trump’s statement on shutting out Muslims. “I defend all the French people in France, regardless of their origin or religion.”

Her niece, lawmaker Marion Maréchal-Le Pen – a vocal supporter of National Front’s bid to have France leave the European Union — said she found Trump’s preference for American isolationism “an interesting foreign policy.” But she called his proposed ban “stupid and completely unfeasible” during a radio interview last month.

In his stump speeches, Trump talks about building a border wall with Mexico, tells of American citizens murdered by undocumented immigrants and blames an “influx of foreign workers” for holding down the wages and contributing to high unemployment among “poor and working-class Americans.”

Trump’s anti-immigrant rhetoric resonates with more radical far-right figures, including Le Pen’s father, Jean-Marie, founder of the National Front. Jean-Marie Le Pen said in February that if he were an American, he would vote for Trump.

Ilias Panagiotaros, a lawmaker for Greece’s neo-Nazi Golden Dawn party, was so charmed with Trump he uploaded to YouTube last month a video of himself discussing Trump’s virtues. He praised Trump’s response to critics after Trump retweeted a quote by Benito Mussolini, Adolf Hitler’s Italian ally.

When called out by reporters for passing along the quote — “It is better to live one day as a lion than 100 years as a sheep” — Trump replied, “But what difference does it make whether it’s Mussolini or somebody else? It’s certainly a very interesting quote.”

Trump has another fan in Maurice Roos of The Hague, another participant in the anti-Islam rally organized earlier this month in the Dutch administrative capital by the local branch of PEGIDA — a protest movement that began in Germany in 2014 “against the Islamization of the West,” words that are part of its German-language acronym.

Trump’s inexperience in government, Roos said, “only works in his favor. Our educated, eloquent politicians have brought us to the point of bankruptcy and brought in more than a million Muslims into Europe at a time of rising Islamist terrorism. It’s time for a different school of thought.”

“He’s definitely not an intellectual on the caliber we’re used to expect from leaders in Europe,” she said, “but he’s a success story. He’s kind of a one-man PEGIDA.”

Schimanski said the politician she respects the most is Hungarian Prime Minister Viktor Orban, who was educated in Oxford and has written his master’s thesis on the Polish Solidarity movement. Orban earned headlines earlier this year for attempting to block a European Union plan to force member states to shelter refugees and, tellingly, erected a fence along Hungary‘s southern border to keep them out.

The duality on Trump in far-right circles stems from the “American way in which he delivers his messages rather than from any real shock with what he’s actually saying,” said Wim Kortenoeven, a former lawmaker for Wilders’ Party for Freedom and currently a political consultant specializing in defense issues and the Middle East.

Both Wilders – who suggested the Netherlands leave the United Nations — and Trump are “into making unfeasible and radical statements to pander to voters,” Kortenoeven said. Yet Wilders and other European rightist leaders are “more ideological than Trump, with his self-aggrandizing and flaunting of his wealth,” he said, adding: “This comes off as alien, a little gauche and blunt” on a continent where philosophers are mainstream cultural icons who are invited on prime-time television talk shows.

“Like many Europeans, I fear the spread of militant Islam more than anything,” Kortenoeven said. “But I don’t think shouting empty slogans that are as inapplicable as they are stupid will help us in any way, so I don’t support Trump.”

But Kortenoeven, who used to work for Holland’s main Jewish pro-Israel group, distrusts Trump also because of Israel, he said.

“As a real-estate man, Trump, who has zero understanding of the Middle East and foreign relations, sees Israel as a real-estate problem — to sell off the minute it suits him,” Kortenoeven said.