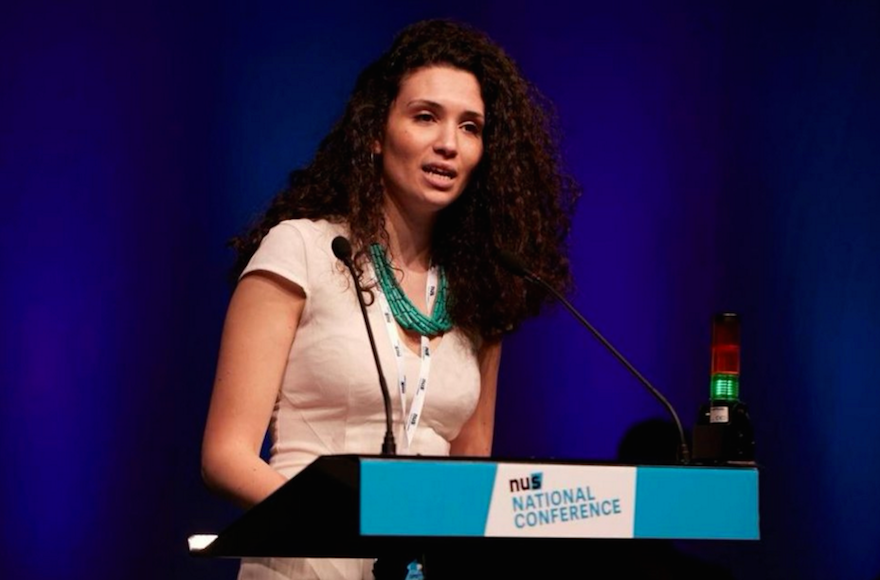 Malia Bouattia, who is Muslim, on Tuesday became the first black woman to be elected president of the union.

In 2014, Bouattia wrote an essay in support or the Boycott, Divestment and Sanctions movement against Israel, but said BDS should not be “misunderstood as the alternative to resistance by the Palestinian people.” Critics accused her of justifying Palestinian terrorism against Israelis.

Later that year, Bouattia spoke out against a resolution condemning the Islamic State group that she said would justify “war and blatant Islamophobia.” She also spoke of various institutions, including British media and her own University of Birmingham, as being under Zionist control.

“Many Jewish students have not been satisfied with Malia’s response so far to the concerns raised by Jewish students over the last few weeks,” the Union of Jewish Students said in a statement after her election Wednesday.

Bouattia was elected during a three-day national conference of the National Union of Students. During the gathering, delegates passed a motion calling for strong action against anti-Semitism on campus. The Jewish union said it was “delighted” by the motion’s passage.

But, citing “many of the concerns Jewish students have had at this conference regarding the way antisemitism and Jewish students are often treated in NUS,” the Jewish union wrote, the motion “does not mean that NUS is doing all it can to fight antisemitism.”

Any “attempts to deny Jewish people the right to self-determination” are anti-Semitism, the Jewish union said.

Earlier this month, in response to an open letter by dozens of Jewish students criticizing her anti-Israel rhetoric, Bouattia wrote that she is “extremely uncomfortable with insinuations of anti-Semitism” and that taking issue “with Zionist politics is not me taking issue with being Jewish.”

Also during the national conference, delegates passed a motion in favor of commemorating the Holocaust at universities. However, dozens were heard cheering when one delegate, Darta Kaleja from Chester University, argued against the amendment on the grounds that it singled out the Holocaust and ignored other atrocities. She said all genocides should be commemorated jointly.

The Jewish student group called the opposition “truly shocking,” adding: “The applause for these delegates’ speeches made today’s conference uncomfortable for Jewish delegates and suggests that NUS is unwelcoming to Jewish students.”

John Mann, a British lawmaker for Labour, called the opposition “inappropriate, offensive, and point to a disturbing wider ignorance about anti-Semitism,” The Independent reported.