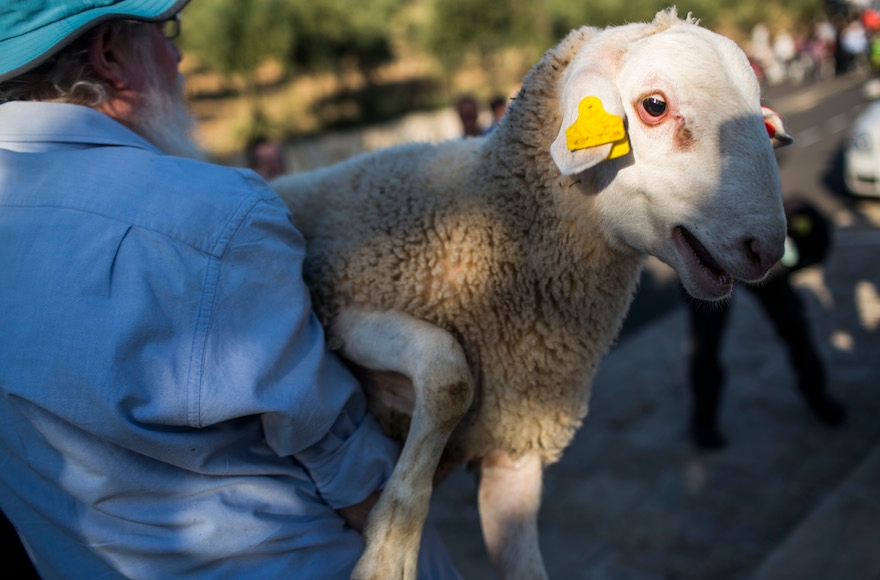 A sheep being carried to a Passover sacrifice 'practice' ceremony at Beit Orot in East Jerusalem, on April 18, 2016.(Hadas Parush/Flash90)
Advertisement

(JTA) — Israeli police detained seven Jewish men suspected of planning to sacrifice goats in the Old City of Jerusalem in honor of Passover, the Times of Israel reported.

The arrests on Friday came amid a pre-holiday crackdown against right-wing activists whose visits to the contested Temple Mount have been at the center of months-long tensions between Israel and the Palestinians.

Authorities barred several groups from entering Jerusalem during the week-long Passover holiday, which begins Friday evening, citing information they intended to carry out sacrificial rituals on the Temple Mount.

According to the Times of Israel, two of the men picked up on Friday morning were on their way to carry out the sacrifice, but were stopped by police before they could do so. Upon their arrest, police spotted a second goat that had been left unattended, which they later connected to a third suspect who was subsequently detained.

A few hours later, officers picked up another four people — all minors — who had a third goat they intended to sacrifice, police said.

The seven suspects were charged with disturbing the peace, a police spokesperson said.

The three goats confiscated by police on Friday were unharmed and have been handed over to the municipality’s animal control department, the police said.