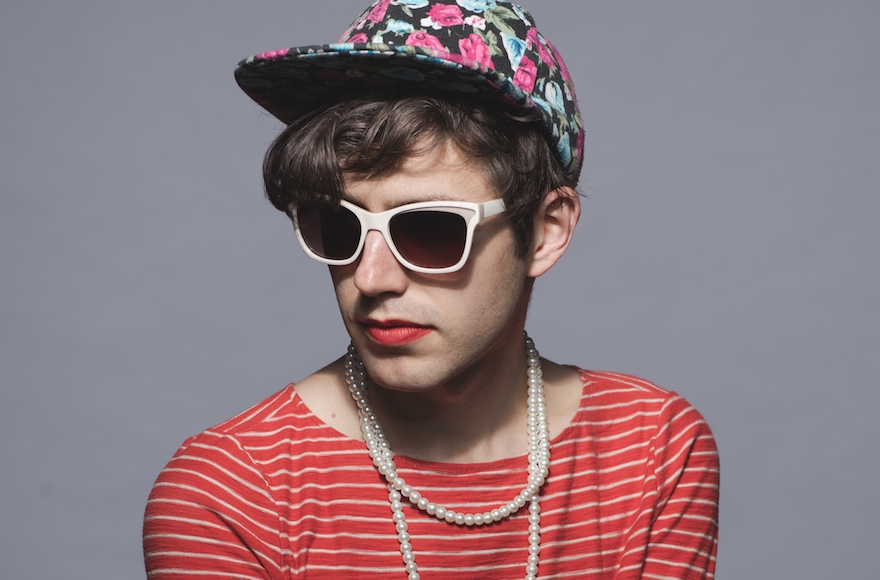 (JTA) — Ezra Furman is an acclaimed indie rocker who, while hanging on his tour bus, has been known to lay tefillin.

It’s safe to say the 29-year-old is probably the only publicly visible musician who navigates the worlds of both Orthodox Judaism and gender nonconformity. Though Furman doesn’t identify as strictly Orthodox, he observes Shabbat and reads the Torah portion on tour each week. Most notably, he no longer plays shows on Friday nights nor travels on Saturdays — prime times for working musicians.

Furman is the first to admit he’s a work in progress, trying to figure out how to encapsulate his gender identity. Though he described himself as “gender fluid” in an essay he wrote for the Guardian, Furman told JTA his preferred term is “gender nonconforming.”

What Furman does have down are his songwriting skills. After quietly releasing two scantly reviewed solo albums and three prior albums with his former band The Harpoons, he was signed by the British indie label Bella Union last year and released the genre-bending opus “Perpetual Motion People” last July.

The album — which like his previous releases blends playful, bluesy modern rock with piano, saxophone and doo-wop vocals — earned significant critical (if not mainstream commercial) applause and established his rep as “the most compelling live act you can see right now.”

For Furman, who is thin and boyishly handsome, his faith and gender identity are not onstage gimmicks. As he explained in his soft, meticulous voice — he is prone to long pauses — both were “real, gradual, messy things” that, like his songwriting moxie, took years to develop.

Furman’s parents attended a Reconstructionist synagogue and he went to a Conservative Solomon Schechter day school in his hometown of Evanston, Illinois, through middle school. In high school, a friend introduced him to the idea of becoming Orthodox, but he didn’t consider it seriously at the time.

However, a couple of years ago, Furman started observing the Sabbath every week, calling it “too important to put aside for career reasons.”

“To me, Shabbat could be called the essence of Judaism, in a way,” he said. “It’s a time to love the world as it is instead of trying to change it — the way you do the rest of the week.”

He added: “On tour, you’re sort of working 24/7, and it became so acute how much I needed to rest to take breaks from that feeling.”

Now when he’s on the road, Furman brings books by Jewish thinkers like Abraham Joshua Heschel, Jonathan Sacks and Alan Lew. He even incorporates some of their ideas in the fabric of his songs, which tend to be achingly personal. His website, “A Guide for the Perplexed,” is named for Maimonides’ famous text.

Furman’s “next frontier” is going kosher, he said.

For now, Furman eats an “improvised vegetarian kosher” diet on tour, though he is on a short break from playing live while working on a book about Lou Reed’s classic 1972 album “Transformer.” He’ll be back on the road in June, hitting the European festival circuit as well as Israel — a country Furman hasn’t visited in over 10 years, he said, and can’t wait to see again.

As for his gender identity, Furman has come a long way from secretly trying on dresses as a teenager. The first time he wore one in public was on stage in 2011 with The Harpoons, which he had formed while attending Tufts University in Boston.

“I was hiding behind the idea of it being a rock and roll show,” he said. “It was like, there are no rules — on stage, it’s not the real world, so no one will bother me about this.”

Now Furman feels closer to attaining the kind of “radically free” persona that he associates with Reed, the late bisexual songwriter whom he admires both as a musician and as one of the first androgynous, out-of-the-closet rock stars.

“Over the course of my late 20s, just in every area of my life, I’m more self assured,” he said. “And I think it has done wonders for me as an artist and as a human being.”

Nevertheless, he avoids dressing “too feminine” in the Orthodox synagogue he regularly attends in nearby Berkeley when he’s home.

“What bothers me is that I feel uncomfortable wearing a dress to an Orthodox shul,” he said. “It’s not a problem with Judaism, it’s a problem with homophobia and transphobia in [American] culture, which includes Jewish culture.”

Furman doesn’t hide the fact that his religious practices can be difficult to keep up on tour, and sometimes he feels alienated from the largely nonreligious guys in his backing band, The Boy-Friends.

“I’m in an environment where there’s no support for it or understanding of it, except for just the kindness of my band mates,” he said. “I wish we would talk more about it really. It’s such a big thing in my inner life.

“I think of Judaism as something similar to being an artist, that it’s a non-capitalist thing to be. I think it’s a form of protest … To answer to a higher authority is, like, very radical.”