Far-right candidate wins 1st round of presidential elections in Austria 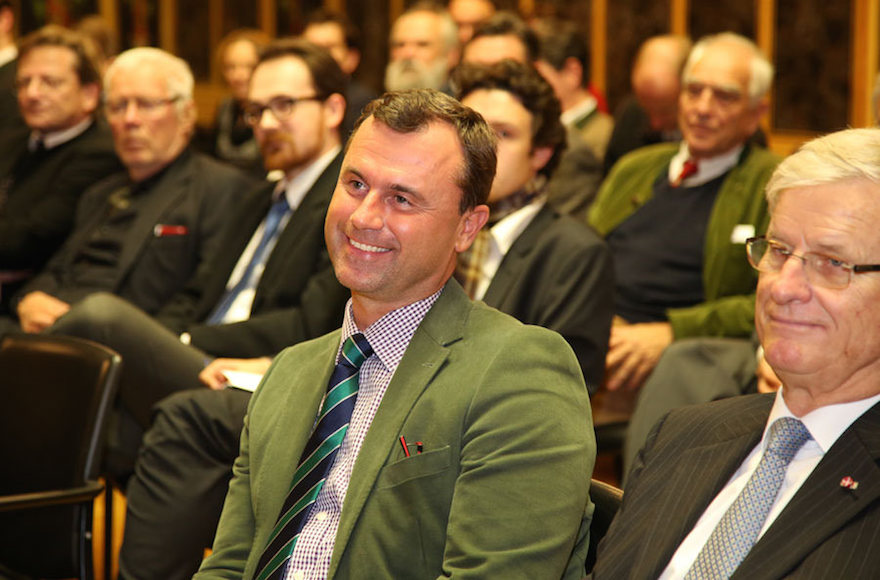 (JTA) — A member of the far-right Freedom Party in Austria won the first round of presidential elections, clinching the movement’s best electoral showing ever.

Norbert Hofer of the Freedom Party, or FPO, took 36 percent of the vote in Sunday’s election, with the runner-up — an independent, left-leaning candidate — taking 20 percent. Hofer, whose campaign focused on keeping migrants from Syria and Iraq out of Austria, and Alexander van der Bellen, an environmentalist with a pro-refugee agenda, will face off in the final vote on May 22 for the largely ceremonial post..

Hundreds of thousands of the refugees have passed through Austria in recent months. Popular opposition to their arrival offers only a partial explanation to the FPO’s successes, according to Karl Pfeifer, a veteran journalist and anti-fascist activist who formerly edited the official publication of Vienna’s Jewish community of 8,000 people.

The Jewish Community of Vienna has shunned FPO, which it regards as having problematic ties to neo-Nazis. FPO Chairman Heinz-Christian Strache has denied the allegations and recently visited Israel, where he met with Likud party officials. In 2012, Strache apologized for posting on Facebook a caricature depicting an obese, hook-nosed banker wearing star-shaped cufflinks.

“The success of the FPO reflects the political center’s failure to provide an alternative,” Pfeifer told JTA on Monday. “Instead of confronting the FPO, the political establishment either ignored it or shifted rightward to steal would-be FPO voters, but the voters went to the source and cut out the middleman.”

Another independent candidate, the right-of-center former judge Irmgard Griss, garnered 19 percent of the vote. She has not yet endorsed either candidate in the final round. In France, mainstream rival parties put aside their differences and endorsed one another to keep the far-right National Front from winning.

“But this sort of behavior does not occur in Austria,” Pfeifer said.

If Hofer wins, Pfeifer said, “It is my opinion that the Jewish community will have no choice but to cooperate with him, as it is bound to work with Austria’s elected leadership.”

He added: “I fear for what this victory means for Austria and for Europe in general because it signals a slide into a restrictive democracy of the kind that exists in Hungary.”