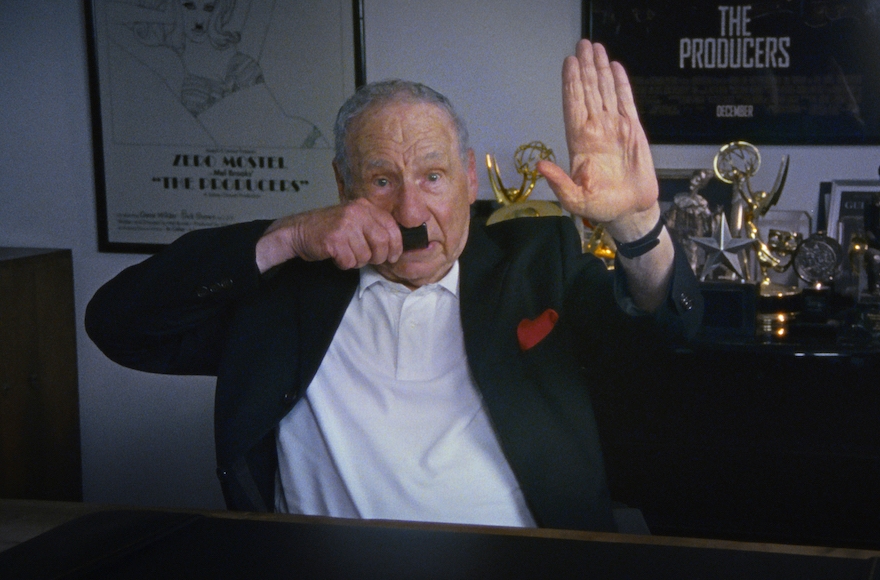 Mel Brooks is one of the comedians interviewed in "The Last Laugh," director Ferne Pearlstein's new documentary about Holocaust humor. (Tangerine Entertainment)
Advertisement

NEW YORK (JTA) — In “The Last Laugh,” a new documentary about humor and the Holocaust (you read that right), the comedian Judy Gold tells this joke: If the Nazis forced her to stand naked on a line with other women, would she hold her stomach in?

How you, or anybody, feels about a joke like that is the point of the documentary, which includes interviews with a slew of mostly Jewish comedians and a cinema verite portrait of an elderly Los Angeles-area survivor, Renee Firestone, who seems to have lived through the Holocaust with her sense of humor largely intact.

“The Last Laugh,” which was a feature documentary at this month’s Tribeca Film Festival in Manhattan, is a hybrid in other ways as well. Director Ferne Pearlstein wanted to explore not only the limits of humor and free speech today, but how Shoah victims and survivors used humor as a salve, defense mechanism and weapon despite their powerlessness.

At a Nevada survivors’ convention filmed in the incongruous setting of The Venetian resort in Las Vegas, one survivor recalls how his fellow concentration camp inmates would mock the SS guards’ latest orders. Contemporary footage shot at the Theresienstadt concentration camp shows inmates performing comic skits and a children’s opera with apparent gusto. We now know that the Nazis allowed these theatricals for their own propaganda purposes, and that many of the performers were subsequently murdered at Auschwitz. But survivors tell of the relief, however temporary, provided by the performances.

READ: Hollywood is not the first to reflect humor amid the horrors of Holocaust

In some ways, the uses to which survivors put humor gave permission to the comedians, most of them Jews, who spun Holocaust-related jokes even in its immediate aftermath. Mel Brooks, a frequent talking head in the film, reminisces about his days at the Borscht Belt hotels in New York’s Catskill Mountains soon after the war had ended.

“I got a lot of laughs with Hitler,” he says, calling it his revenge on the Nazis. He’d go on to make the 1968 movie “The Producers,” which stunned audiences with its chorus-line Nazis and prancing Hitler. The shock had largely warn off by the time “The Producers” had become a hit Broadway musical in 2001, perhaps proving Steve Allen’s famed formula, “Tragedy plus time equals comedy.”

Yet “The Producers” also illustrates a key point in the film: Making fun of the Nazis is OK, making fun of the Holocaust not so much. Actor Robert Clary, the French-born Buchenwald survivor who played Corporal LeBeau in the 1960s sitcom “Hogan’s Heroes,” is asked how he could have appeared in a comedy set in the kind of camp where 12 of his immediate family members were murdered. He points out that the show was set in a POW camp, not a concentration camp.

But even though Brooks insists “I don’t give a s–t what’s in good taste,” even he has his limits. The film delves into the controversy that brewed after the late Joan Rivers said of the supermodel Heidi Klum, “The last time a German looked this hot was when they were pushing Jews into the ovens.” Abe Foxman, the former head of the Anti-Defamation League and himself a child survivor, complains in an interview that Rivers’ joke trivializes the Holocaust. Even Brooks says of the joke, “I can’t go there.”

But as tasteless as it may be, the Rivers joke ridiculed Germans, not their Jewish victims – all but saying that 70 years after the Holocaust, the German people can’t escape their guilt or culpability.

In fact, few of the jokes in “The Last Laugh” are as tasteless or transgressive as some commentators in the film suggest. Larry David’s “survivor” episode from “Curb Your Enthusiasm,” the “Soup Nazi” gag from “Seinfeld,” a Louis C.K. bit about auditions for “Schindler’s List” or Ricky Gervais’ Anne Frank jokes — none carries the shock of a single utterance of, say, the “N-word.”

Even Gold’s joke, which she tells almost apologetically, is not a joke about Holocaust victims but her own vanity.

Of all the comics heard in “The Last Laugh,” only Sarah Silverman seems to come close to violating taboos. In a bit from her 2005 concert film “Jesus is Magic,” Silverman recounts how her “Jewy” niece referred to the “60 million” who died in the Holocaust. When Silverman says the correct number is 6 million, the niece asks what the difference is.

“Because 60 million would be unforgivable, young lady,” Silverman replies.

To appreciate Silverman’s joke, you have to be familiar with her faux naive persona – the bigot too self-involved to realize she is a bigot. Renee Firestone, the survivor, is clearly not on her wavelength. In one scene she is shown watching Silverman on YouTube.

“I don’t think this is funny,” she says.

Pearlstein recalls the moment as one of the most uncomfortable during their weeks of filming.

“Renee is so resilient,” the director says. “She uses her sense of humor to get through things, but she doesn’t think everything is funny. That makes her a perfect guide for that reason.”

Including Firestone’s story “lets us remember what we’re laughing at,” Pearlstein says.

But “The Last Laugh” doesn’t bestow or withhold permission as to what an audience should and shouldn’t find funny. If Foxman, the arbiter of anti-Semitism, comes across as a bit of a killjoy in the documentary, that’s because it is at heart a comedian’s movie, and Holocaust humor is understood on their terms. Comedians have one obligation and one obligation only, they insist: to make people laugh.

The last word, spoken early in the film, belongs to Gold, who declares, “It’s all about the funny.”