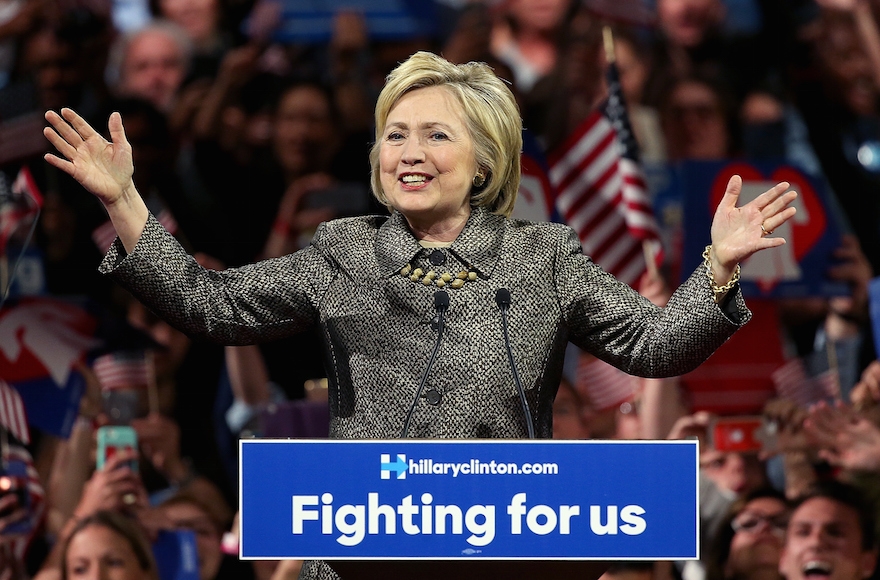 WASHINGTON (JTA) — Donald Trump swept five primary contests and Hillary Clinton won four on Tuesday, consolidating leads that increase the likelihood they will face off against each other in November’s general election.

Bernie Sanders, the Independent senator from Vermont vying with Clinton for the Democratic nod, won just one state, Rhode Island, out of the five in play. Clinton won Pennsylvania, Delaware, Maryland and Connecticut.

Advisers to Sanders, the first Jewish candidate to win major nominating contests, have said in recent days that the campaign would “reassess” how to go forward following the Tuesday contests, though they maintained that Sanders would remain in the race until the party convention this summer. Clinton reached out to Sanders in her victory speech in Philadelphia on Tuesday night.

Trump’s dominance edged him closer to the 1,237 delegates he needs to win a first-round convention vote. The New York Times estimated his overall total as of Tuesday night at 926, with 622 available in the remaining primaries.

The billionaire real estate magnate trounced his opponents, Texas Sen. Ted Cruz and Ohio Gov. John Kasich, winning 60 percent or more of the vote in Connecticut, Delaware and Rhode Island. Trump took 58 percent of the vote in Pennsylvania and 55 percent in Maryland.

The margins suggest that the recent alliance of Kasich and Cruz, who hope to deny Trump a majority in the first convention vote by divvying up the remaining states, may be quixotic. Were Trump to lose the first convention vote, delegates would be free to support whomever they choose, enabling Cruz and Kasich to compete for their support in subsequent votes.

In his victory speech, Trump said the Kasich-Cruz alliance was a sign that both campaigns were flailing.

“It’s collusion,” he said. “People are in jail for collusion, but in politics it’s different.”

“We will beat Hillary so easily,” he said.