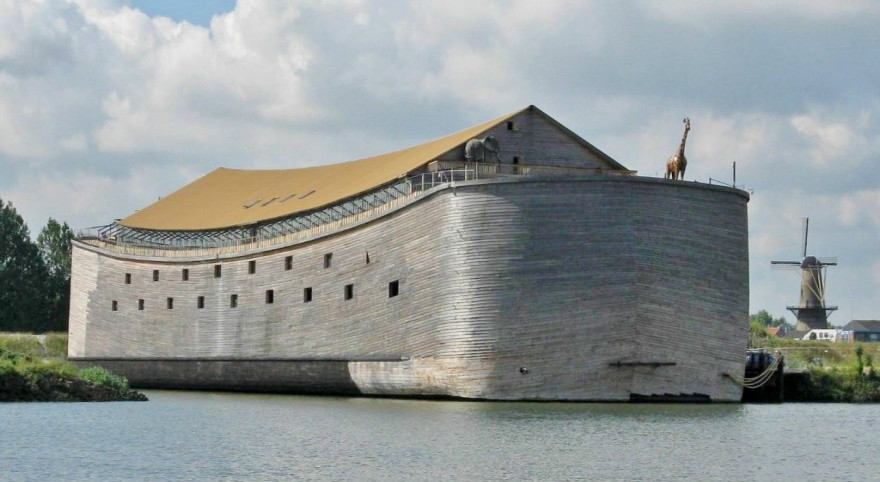 Ark of Noah, a Dutch Christian organization, is planning to sail a life-size replica of Noah’s Ark to reach Brazil during the Summer Olympics and Paralympic Games. (Courtesy of Ark of Noah Foundation)

RIO DE JANEIRO (JTA) — A Dutch Christian organization is planning to sail a “replica” of Noah’s Ark to reach Brazil during the Summer Olympics and the Paralympic Games in Rio de Janeiro.

Longer than an official soccer field, the vessel was built following the biblical measurements given in Genesis 6:15, the director of the Ark of Noah Foundation, Herald A.M.A. Janssen, told ABC News.

The voyage, which is still in its planning stages, intends to stop at multiple port cities in Brazil as well as Argentina, Uruguay and Colombia, before coming to the United States.

The Olympics start in August and the Paralympics the following month.

The ark, which spans five floors and can hold more than 5,000 people, weighs roughly 2,500 tons and is 95 feet wide, 410 feet long and 75 feet tall. Carpenter Johan Huibers said he began building it after dreaming about an intense storm that flooded his hometown in the Netherlands.

“And this is how you shall make it: The length of the ark shall be three hundred 8 cubits, its width fifty cubits, and its height thirty cubits,” the Bible passage reads.

By reviewing multiple historical measurement units in the various ancient cultures, Huibers created a measurement scale to use while building his ark. Since its completion in 2012, hundreds of thousands have visited the ark, which became a multi-floor interactive exhibit focused on the spreading of religious teachings from the Bible for Christian educational purposes.

Tourists who visit the ark encounter Bible-based stories and exhibitions, attractions, a movie theater and more.

“We are so pleased with the very warm support of the private community in Fortaleza, our first stop in Brazil after crossing the Atlantic Ocean,” Janssen said. “The target is to reach Fortaleza in July, and reach the Paralympic Games 2016 in Rio de Janeiro by Sept. 7.”