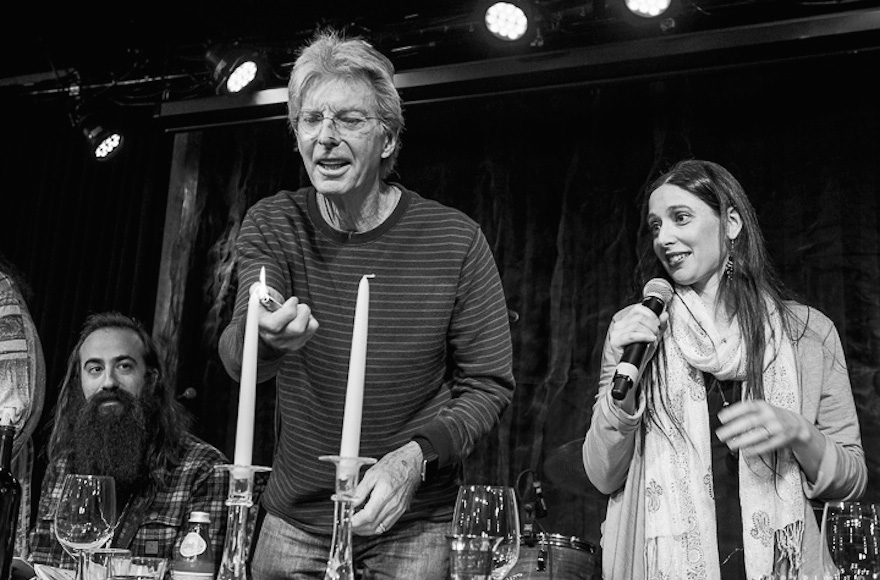 SAN RAFAEL, Calif. (JTA) – “Why can’t we eat veggie burritos tonight? Will I be miracled? Will they play ‘The Wheel?’ Will Phil sing?”

These four additional questions were asked at a Passover seder this week that’s quickly becoming a new Bay Area tradition.

Fans of the legendary psychedelic band the Grateful Dead celebrated Passover for the third year in a row Wednesday night at Terrapin Crossroads, the Marin County club owned by the band’s bassist, Phil Lesh.

This was the first year that seders were held on consecutive nights, Tuesday and Wednesday. Tickets for both sold out within minutes; 150 guests attended each night.

These seders were unlike many others in that after the reading of the Haggadah and a meal of matzah ball soup and brisket, the tables were cleared to make way for a dance floor, and guests were treated to an hour-and-a-half set of music by Lesh and friends, the Terrapin All Stars.

READ: Touch of pray: Celebrating Shabbat and the Grateful Dead

Lesh and his wife, Jill, opened Terrapin Crossroads in 2012, with community building part of its mission. Lesh, who is not Jewish, had always noticed the disproportionate number of Jews among the band’s fans, known as Deadheads. Encouraged by Ross James, a Jewish guitarist in his band, Phil Lesh and Friends, Lesh decided in 2013 to hold a Hanukkah menorah lighting.

Enter Jeannette Ferber. A cantorial soloist at the Renewal synagogue Chochmat HaLev in Berkeley, Ferber and her husband, Cory, were Terrapin regulars. Ferber offered to help with the menorah lighting, which led to her becoming the go-to person to form a seder planning committee.

In 2014, she led the first seder, and was invited to sing a song that night with the band of Bay Area musicians in Lesh’s post-Dead circle. (The surviving members of the Dead – Lesh, Bob Weir, Bill Kreutzmann and Mickey Hart – have performed in solo projects and bands since the band’s last major tour in 2009.) 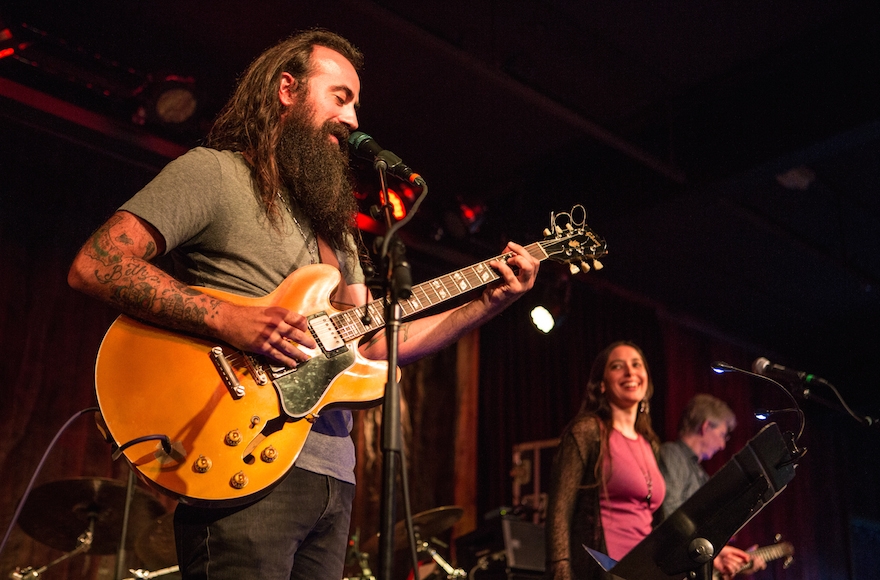 At both seders this year, Ferber sang numerous songs, including Bob Dylan’s “Knockin’ on Heaven’s Door,” which for years has been part of the High Holidays liturgy at Chochmat HaLev, and Leonard Cohen’s “Hallelujah.”

Most of the songs sung over the two nights had some kind of connection to Passover or the Bible, like the Dead’s “Samson and Delilah.” In “All New Minglewood Blues,” James changed the lyric from “a couple shots of whiskey” to “a couple shots of Manischewitz.”

This year the seder was led for the first time by Wendy Garf-Lipp, of Dartmouth, Massachusetts, who flew across the country for the event. Garf-Lipp  has taught at Solomon Schechter day schools in Jericho, New York, and Providence, Rhode Island. Her son Ezra Lipp, an alumnus of the Providence Schechter, is now a frequent drummer for Lesh.

“I’m 60 and he’s 32. L’dor v’dor,” said Garf-Lipp of her son, using the Hebrew phrase meaning “from generation to generation.” “To have this 30-year gap between the two of us and share this music that we both love” is an incredible thing, she said. “To see your child taking the music you grew up with and reinterpreting it for a new audience is spiritual.”

Garf-Lipp has been a Deadhead since 1967, and was at their legendary concert at the Great Pyramid of Giza in 1978. She had been in Israel when it was announced.

“I’ve always seen Judaism as this fusion of fixity and flux, this continuum of thought and idea and behavior,” Garf-Lipp said. “And I’ve always seen being a Deadhead in the same way.”

As soon as her son began playing at Terrapin Crossroads, she knew she wanted to be involved with the seder. She offered to revamp the Haggadah and spent six months working on it.

Culled from a range of Haggadot – including ones produced by the Reform movement, Chabad and the JQ International Jewish LGBT group — it  includes readings about contemporary  social issues like human trafficking and domestic violence.

Besides lighting the candles, Lesh narrated the Passover story and could be seen singing his way through the four questions along with the crowd.

Brian Markovitz, who runs the deadheadland website as well as the Facebook group Jews for Jerry (as in Garcia, the band’s late guitarist and guiding spirit, who died in 1995), has been part of the seder planning committee all three years.

“This is my family, and who I spend the most time with, so it makes sense that this is how I’d spend my Passover,” Markovitz said. “It’s so great that Phil recognizes that.”

Jerome Marcus, attending the seder for the first time, was struck by watching the 76-year-old Lesh play with his son Grahame and other musicians much younger than Lesh.

As for Ferber, it’s been a dream come true. Before she became a cantorial soloist six years ago, she hadn’t sung in over 10 years.

Ferber, 38, grew up in Canton, Ohio, attending the Reform Temple Israel. She first discovered her love of singing at Camp Wise outside of Cleveland. A data analyst by day at Kaiser Permanente, she found Chochmat HaLev after a period of disconnection from Judaism and began singing in the choir.

When its choir director moved away, she tapped Ferber to succeed her as cantorial soloist.

Since becoming Terrapin’s consultant for all things Jewish, Ferber has been asked to sing with Lesh’s band at other gigs as well. One weekend last June, when they re-created the Dead’s shows from 1977 – including one from Barton Hall in Ithaca, New York, that many consider to be the Dead’s best performance ever — she sang the parts of Donna Jean Godchaux, a former backup singer in the band.

Grammy Award winner John Mayer played with the band that weekend, and an Instagram photo of her with Mayer taken after the show caused a flurry of speculation among his female fans as to who his new lady friend was (the star has dated everyone from Katy Perry to Jennifer Aniston, and many fans were relieved to learn that the photo was taken by her husband).

A video from the Barton Hall show, thanks to Mayer’s appearance, has over 200,000 views on YouTube.

Whether she’s singing at shul or at Terrapin, Ferber said, “I try to open myself up to be a channel for song and not overthink things. So much of the Dead’s music has a deep story or spiritual element to it, so that makes it the same.”

For the longtime Deadhead, “getting to sing with someone from such an influential band is more than I ever could have imagined, and I love the fact that it happened through singing in synagogue,” she said. “I’m so beyond grateful.”