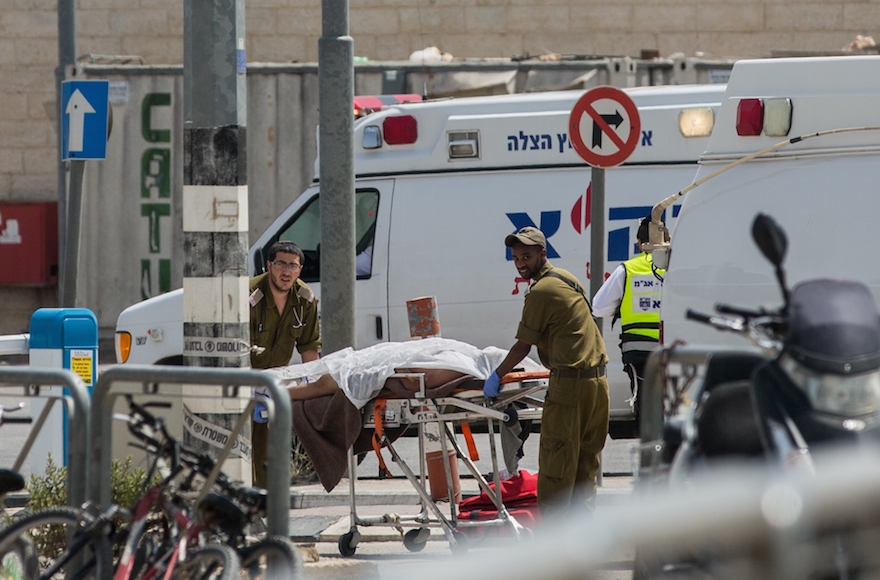 Israeli paramedics evacuating the body of a Palestinian man at the Qalandiya Checkpoint after an attempted stabbing attack, April 27, 2016. (Yonatan Sindel/Flash90)
Advertisement

(JTA) — The Israel Police plan to investigate whether civilian security guards acted unlawfully when they shot dead a Palestinian brother and sister who allegedly were attempting to carry out a stabbing attack.

On Thursday, the police said they would investigate the April 27 incident at the Qalandiya checkpoint north of Jerusalem, the Times of Israel reported.

“The investigation of the shooting at Qalandiya has been handed to the Judea and Samaria District police,” Israel Police spokeswoman Luba Samri said in a statement, according to the Times of Israel.

Maram Salih Hassan Abu Ismail, 23, and Ibrahim Saleh Taha, 16, were killed after Ismail allegedly threw a knife at the guards. A second knife was found on her brother. Ismail, the mother of two, was pregnant, according to the Palestinian Maan news agency.

The Jerusalem Magistrate’s Court has imposed a gag order on the investigation and the names of the suspects. The police have declined to publicly release a video of the shooting, despite requests from the victims’ father, who claims police planted knives on the two after shooting them.

The Justice Ministry’s Police Internal Investigations Department announced Sunday that an inquiry determined that the siblings were killed by private guards, who often are stationed at the major crossings between Israel and Palestinian areas to boost security.