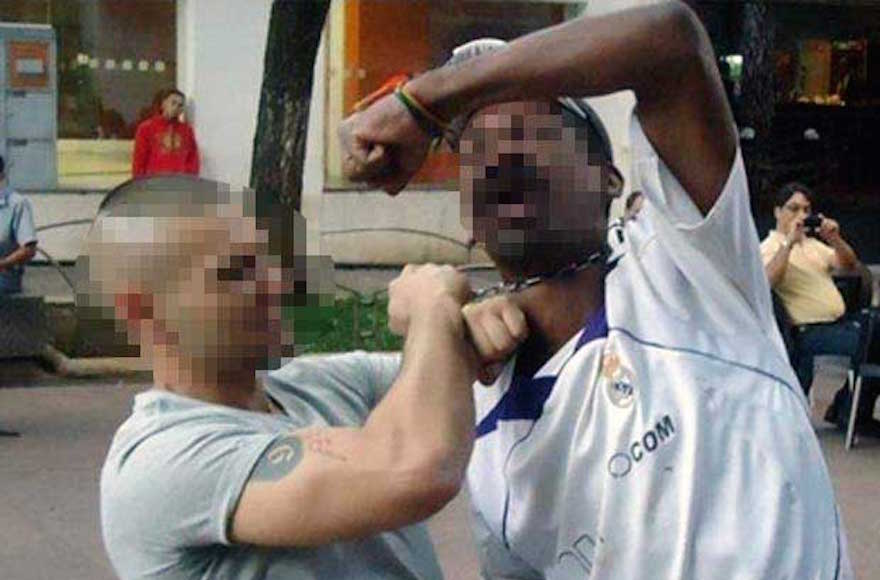 Donato di Mauro mock-strangling a black homeless man in the city of Belo Horizonte in a Facebook photo. (Screenshot from Facebook)
Advertisement

The local Jewish federation’s internet monitoring efforts reportedly were key to the case against Donato di Mauro, 25, and Marcus Vinicius, 26. Both men, known to belong to skinhead groups, were convicted of “Nazi propaganda,” “racism” and “conspiracy.”

“This is a longtime action on which we have been working for some three years,” said Salvador Ohana, president of the Jewish federation of the state of Minas Gerais. “We follow closely on the internet, we patrol the publications. We have tracked their Nazi content and the police joined us. Our lawyers served as accusers.”

The sentence allows a semi-open detention, which means the two men would work during the day and sleep in jail overnight. The Jewish federation had proposed jailing the skinheads full-time. The sentence may be appealed.

Di Mauro was convicted for filling his social media profiles with Nazi and racist messages, photos and videos. He had four prior convictions for “aggression” and “homophobia.” In 2013, he was jailed for six months for mock-strangling a black homeless man in the city of Belo Horizonte and posting the photo on Facebook.

Vinicius was found to have appeared in Di Mauro’s Facebook photo performing a Nazi salute next to his young child, for which he was also convicted of “corruption.”

Ohana, of the Jewish federation, said neo-Nazis “have a weak presence [in our state] so far.”

“Our historic institute team goes to colleges to give lectures, monitor and speak on the Holocaust,” he said. “I am currently requesting that Shoah studies be added to books in public schools.”