Brazil’s Jews are scaling back on their kids’ birthday extravaganzas 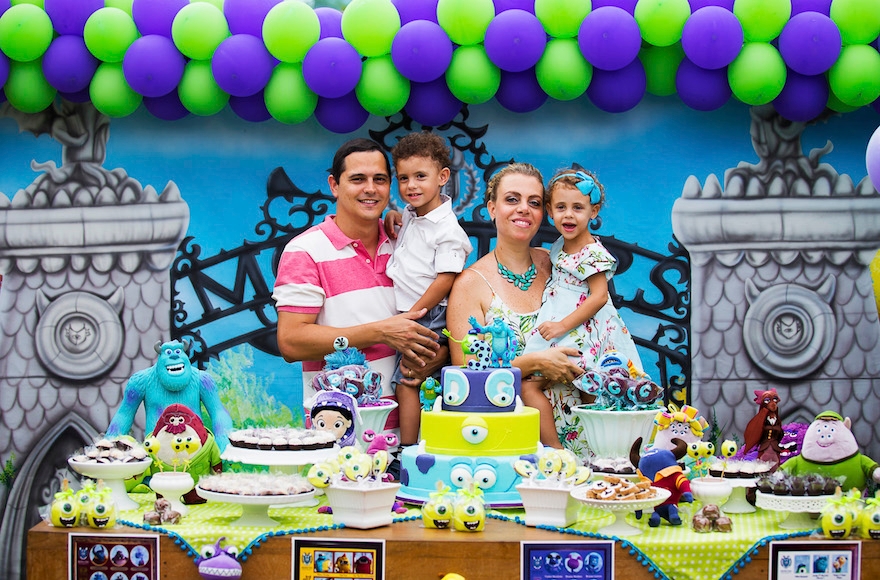 Eduardo and Mariana Zagury held a third birthday party for their twins Gabriel and Daniela at a fancy "party house" in Rio, but chose the venue for its innovative educational approach. (Courtesy of the Zagury family)
Advertisement

At “casas de festa” (party houses), parents often pay several thousand dollars for lavish themed decorations and amusement-park style attractions for four-hour long, deejayed parties for 100-plus friends of the birthday boy or girl — often as young as 3 – escorted by their parents and siblings.

“It’s a millionaire market,” said businessman Fernando Fajngold, 46, one of the pioneers of the $100 million party industry. “Parties are spectacles where parents ask for foreign [cartoon] characters, magicians, mimics, caricaturists, Japanese food and whatever else you can imagine. Some of these super productions may cost nearly the price of a popular car.”

But in a sign of Brazil’s flagging economy, and a growing sense of modesty among many families, some Brazilian Jewish families are beginning to cut back on the birthday extravaganzas.

Latin America’s largest nation and the home of some 120,000 Jews is facing what is considered the most severe economic crisis in a century.

In 2015, a record 500 Brazilian Jews moved to Israel seeking a better life for their families, including quality public health care, education and job opportunities. For many emigres, moving to Israel is also seen as an escape from snobbery and one-upmanship.

Michelle Diamante Wajntraub, a native of Porto Alegre who lives in Rio, believes the economic crisis is changing attitudes among her contemporaries. She remembers inviting 150 guests to one of her daughters’ parties, but now she prefers small get-togethers.

“It’s too much money for a four-hour party and the child won’t even care if the mother did it or hired someone. All they want is to play with friends and sing ‘Happy Birthday,'” she said. “When kids are little, their big parties mostly end up being for the parents. Also, I like to get involved and the kids have lots of fun with the preps.” 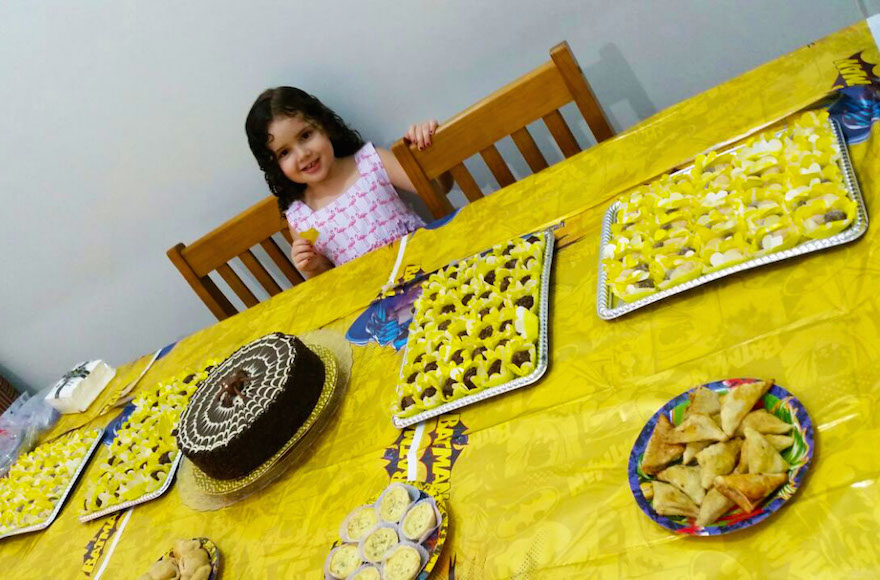 Charlotte Fridman celebrated her birthday at a modest party at her family’s home near the Copacabana neighborhood. (Courtesy of Aline Fridman)

Psychologist Aline Fridman said her children Kurt and Charlotte, ages 7 and 5, prefer parties held at their spacious apartment near Copacabana, the Rio neighborhood where most middle-class Jews live.

“Music, theater, books and toys, that’s how we do our parties at home,” Fridman told JTA. ”Kids choose what to play with. Last time I bought a pie, candies and food and that’s it. My mom and aunts helped me. It’s cozier and we save money to travel and for cultural activities. We know many couples who are used to doing the same.”

Deborah Khodari, the co-founder of Zukie, a fancy children’s clothing store popular among Jewish moms in Rio, has noticed signs of change among mothers who buy presents for their children’s friends.

“Kids attend an average of four to six parties every month. Sometimes it seems they need to clone themselves between three parties on one same weekend,” said Khodari, a mother of two. “Our shoppers used to pay $30 for a present, but now the average is nearly half of that.”

To be sure, Brazilian Jews continue to host extravagant parties, just as many North American Jews throw lavish bar and bat mitzvah galas despite calls from rabbis and others to scale back for the sake of modesty and “spirituality.”

The children’s party market in Brazil grows 30 percent every year, according to SEBRAE, the Brazilian government’s small business bureau. Considering a target population of 52 million children under 14 in the country, the business is hardly child’s play.

Many of the air-conditioned entertainment shrines where such parties are held are located in Botafogo, where Brazil’s largest Jewish day school, Colégio A. Liessin, is also located. When observant families throw a party, they provide a small table with kosher food — if not a full kosher buffet. When meat is served there are even non-dairy versions of brigadeiros, the sugary Brazilian bonbons that are de rigueur as part of elaborate birthday displays.

Fajngold opened the Unidunite party house in 1996 in upscale Barra da Tijuca, Rio’s newest neighborhood. The demand was so impressive that he opened a second venue, where during the 2000s he hosted some 30 parties every month. Competition quickly became fierce, leading him to close the branch. Today he runs a film and photo production company to serve the industry.

Mariana Zagury’s twins Daniela and Gabriel attend kindergarten at Liessin. Some 200 guests attended their third birthday at one of Rio’s ritziest party houses, Existe Um Lugar. Typical for such events, families brought nannies dressed in impeccable white uniforms to look after their kids.

And yet even here the couple tried to make the day more meaningful. Zagury and her husband, Eduardo, who serves as cantor for Jewish weddings, chose the venue for its innovative educational approach, healthier food, open-air environment and the greenery surrounding the playground.

“Everyone, including Jewish couples, have been seeking more meaningful parties,” Zagury told JTA. “I have the best memories from my childhood when my mother made most things alone without professional aid. I guess it’s a trend once again.” 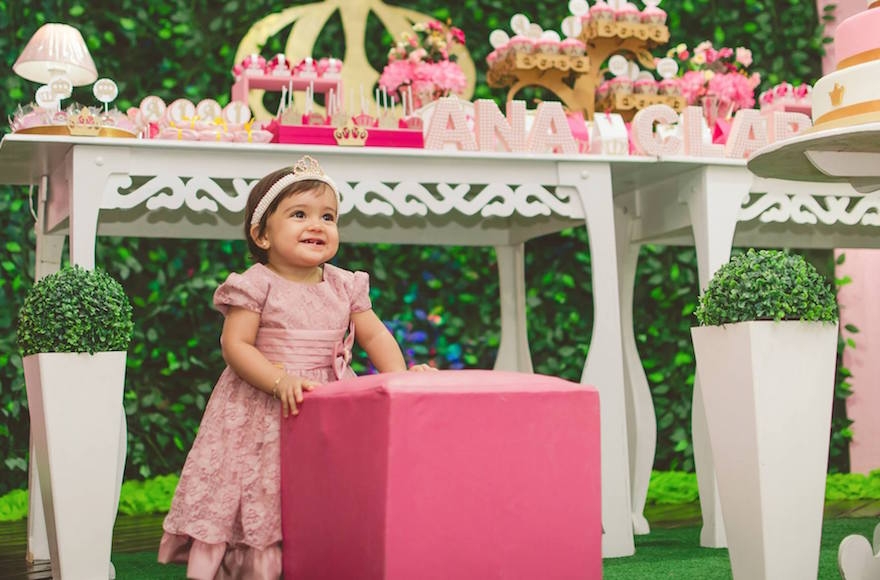 Lavish theme parties, even for toddlers, are the norm at Brazilian “party houses” like Unidunite in Rio’s upscale Barra da Tijuca neighborhood. (Facebook)

Although some prefer discretion, most Jewish parents brag about their super parties. Sending pictures to a Jewish newspaper’s social column has been replaced by sharing an album on Facebook. Gustavo Serebrenik is among the more sought-after photographers. Nearly half of his clientele is Jewish.

“Spontaneous photos, when performed with the appropriate technique and good light, have the power to make parents truly delighted,” he told JTA. “Those are moments that they didn’t notice during the party and they are caught by surprise to see in pictures.”

In Israel, some Brazilian immigrants look back on the big parties with a mixture of nostalgia and rue.

When Rio-born kindergarten teacher Karen Holperin, who now lives near Tel Aviv, threw the first birthday party for her Israeli-born child Yoni last year, she invited only 30 children and adults. Guests were asked to bring a savory or sweet dish to the park, and she baked the cake.

“I fell in love with the simplicity and intimacy. No waiters, no cleaning ladies, no cooks, no professional decoration,” Holperin told JTA. “We do it on our own. We prepare quiches, salads and sandwiches, or order coxinha [chicken fritters]. Mothers prepare the recreation. I follow my Brazilian Jewish friends’ parties on Facebook and today I find those super productions very awkward.”

Sao Paulo native Luciana Almeida Tub, who lives in Netanya, recently threw a joint party for her kids Uri and Lia. She and her Uruguayan husband welcomed friends of various backgrounds to a party at a Netanya park. Tub directed the show herself.

“What has always impressed me in celebrations here is simplicity in all possible ways,” Tub told JTA. “No loads of money, no one dying to set up a breathtaking decoration, no one dedicating an entire night to prepare candies.”

Marcela Goft’s daughter Hannah was born in Israel after her mother made aliyah in 2008. However, the family traveled to Rio to celebrate her first birthday – at a party house.

“We did it the Brazilian way. Israelis believe parties like ours are unnecessary and – why not – ‘chaval al hazman,’ a waste of time,” Goft told JTA in an email from her home in Efrat, in the West Bank. “Something I like in the Israeli culture: Whereas in Brazil birthday kids receive tens of very expensive presents, here ordinary sticker books or coloring books is enough.”

For Fridman, replacing opulent parties for the do-it-yourself style is a smart and very Jewish trend.

“Due to the historic persecutions, we Jews know we don’t take with us anything but our knowledge, memories, talents, traditions,” she said. “What we save today can be enjoyed by our family tomorrow.”