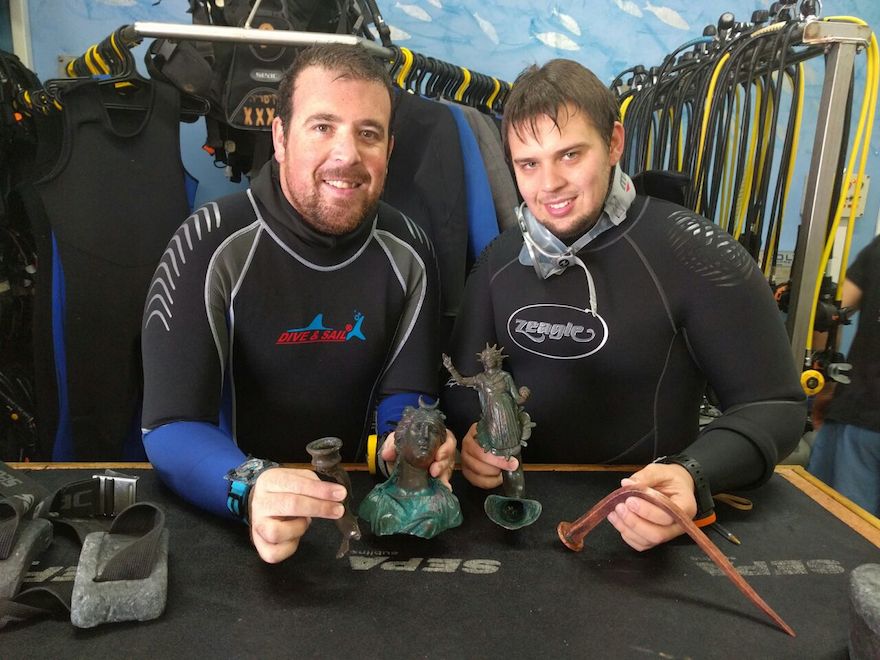 (JTA) — Israeli divers off the Mediterranean coast have made the country’s largest underwater discovery of Roman-era artifacts in 30 years.

A dive in the harbor in Caesarea uncovered statues, thousands of coins and more cargo from a merchant ship that sank 1,600 years ago, the Israel Antiquities Authority announced in a news release Monday.

Divers Ran Feinstein and Ofer Raanan of Raanana made the initial discovery shortly before Passover and then alerted the antiquities authority.

According to the authority, many of the artifacts are bronze and “in an extraordinary state of preservation,” among them a bronze lamp depicting the sun god Sol, a figurine of the moon goddess Luna, a lamp in the image of the head of an African slave and a bronze faucet in the form of a wild boar with a swan on its head. Archaeologists also discovered fragments of large jars and thousands of coins.

In a statement, Jacob Sharvit, director of the Marine Archaeology Unit of the Israel Antiquities Authority, and Dror Planer, deputy director of the unit, said: “These are extremely exciting finds, which apart from their extraordinary beauty, are of historical significance.”

The two noted that it has been 30 years since “a marine assemblage” of this type has been discovered in Israel and that it is rare to find metal statues because most were “melted down and recycled” in the past.

The statues are also in unusually good condition because the sand underwater protected them, according to the archaeologists.

Sharvit said the amount of discoveries are being made in the Caesarea harbor has increased lately due to a lack of sand on the seabed and an increase in the number of divers there.

The two divers who discovered the shipwreck will be awarded a certificate of appreciation.