Why Jewish day school students should recite the Pledge of Allegiance 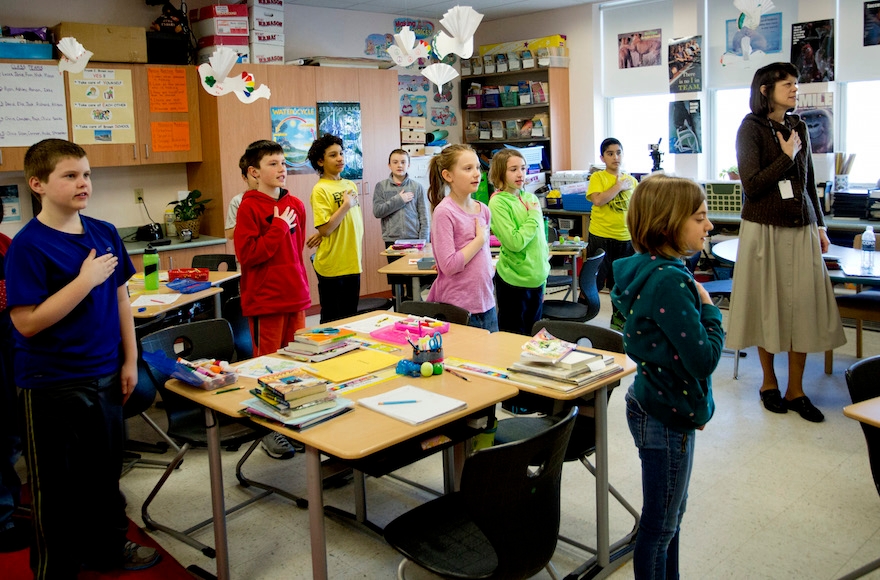 Students at an elementary school in South Portland, Me., reciting the Pledge of Allegiance, March 25, 2015. (Gabe Souza/Portland Press Herald via Getty Images)
Advertisement

PITTSBURGH (JTA) — As a U.S. immigrant and a parent, I’m somewhat fanatical about my kids’ appreciation for their citizenship. Last year I organized what I hope will be an annual second-grade field trip to our local swearing-in ceremony for new American citizens.

As a result of that experience, I discovered the students at our children’s Orthodox day school weren’t reciting the Pledge of Allegiance every day. I just assumed — like a lot of parents at the school — they did.

Years ago, when the school had a PA system, the pledge was recited to the whole school. But when it became the decision of individual teachers whether to say it in the classroom or not, some did and some didn’t. And over the years fewer and fewer teachers did.

I’ve successfully pushed the school to get back into the habit of a daily recitation. Saying the Pledge of Allegiance daily is an important action for all kids, not just for those of immigrants. Taking American citizenship for granted, which is what can happen when you don’t establish a daily reminder like the pledge, is a big step toward ignorance, and that can result in the inability to fully participate in or defend our republic.

But there’s good news for Jewish day school students: The daily recitation of the pledge should be easy to implement. There’s terrific symmetry between the American pledge and the Jewish tradition — Jews, as it happens, already have a pledge of allegiance that is recited daily: the Shema.

The Shema opens with what is the basic statement of Jewish belief: “Hear, O Israel, the Lord is our God, the Lord is one.” The twice-daily recitation of this affirmation of Jewish principle is commanded in the Bible, but it is separate from the obligation to pray.  The bulk of the Shema is made up of three biblical texts — Deuteronomy 6:4-9; 11:13-21 and Numbers 15:37-41 — and discusses some of Judaism’s basic principles: love of God, Torah study, the concept of divine reward and punishment, and the exodus from Egypt. Since ancient times, it has been recited consistently and without editorial changes.

The Pledge of Allegiance is slightly younger, having first been published in 1892 to celebrate the 400th anniversary of the discovery of America.  In their 2010 book, “The Pledge: A History of the Pledge of Allegiance,” authors Jeffrey Owen Jones and Peter Meyer explain how the author, Francis Bellamy, wanted the pledge to be a vehicle for expressing “intelligent patriotism” – meaning not only love of country, but awareness of the nation’s ideals.

The pledge was recognized officially by Congress in 1942 and the words “under God” were added by President Eisenhower on Flag Day, June 14, 1954.

“From this day forward, the millions of our schoolchildren will daily proclaim in every city and town, every village and rural school house, the dedication of our nation and our people to the Almighty,” Eisenhower declared at the time.

Yet as commonplace as it may have been to recite daily this affirmation of fidelity and loyalty to our country, it isn’t common practice today. The Supreme Court ruled in 1943 that no one could be forced to recite the Pledge of Allegiance and, due to objections to the phrase “under God,” public schools have either stopped having students say it or allow those who object to remain silent. Some 43 states have legislation requiring daily recitation of the pledge at public schools, but enforcement of such rules is another story. Only Wisconsin requires that the pledge also be said by private school students.

With day schools, it is difficult to get a full accounting of any policies on saying the pledge — suggesting, perhaps, where it falls among school priorities. Most, however, recite the Shema daily.

The story was the same when I spoke to Bradley Solmsen, head of the Progressive Association of Reform Day Schools.

“It is likely the vast majority are saying Shema as part of daily tefillah,” he said, adding he “would be very surprised if there are Pardes schools where the pledge is a regular part of their day.” 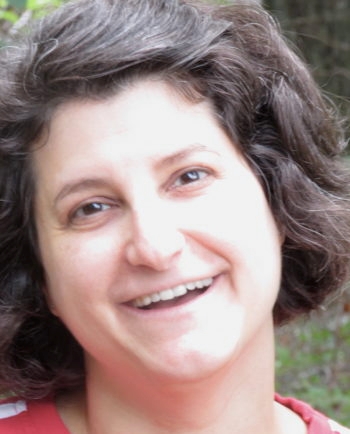 I could not find any Orthodox, Chabad or haredi Orthodox schools where the Shema is not recited daily — but there is an equal and opposite lack of information on recitation of the pledge.

Rabbi Shmuel Klein, director of publications and communication at Torah Umesorah, an organization of haredi schools, said it was a “reasonable assumption” that some schools said the pledge, though he also said that some did not.

“The issue has never been raised,” Klein said. “There’s no conscious decision to remove it from the daily regime, but there’s so many things in the daily schedule that it hasn’t been a priority.”

The one exception was the response from the executive director of the Schechter Day School Network, Jon Mitzmacher.

“Schechter schools engage their students in daily prayer and participate in patriotic rituals such as offering the Pledge of Allegiance [if based in the States],” he said.

This is exactly right. Not only should Jewish day school children be reciting the Pledge of Allegiance, but teaching the symmetries with the two would go a long way toward generating a proper understanding of the importance of each.

The Talmud (Brachot 13a) describes reciting the Shema not as tefillah (prayer) but as “kabbalat ol malchut shamayim,” which can be understood as the daily renewed acceptance of God’s authority on ourselves as individuals.

Rabbi Daniel Yolkut, spiritual leader of Pittsburgh’s Poale Zedeck Orthodox congregation, sees the parallels between the Shema and the Pledge of Allegiance.

“The idea [of the Shema as a pledge of allegiance] is particularly provocative as it implies that there is a need for human buy-in even to the absolute rule of God,” he said.

Similarly, we need to “buy in” to the notion of pride in our American citizenship. Valuing and appreciating that gift of Americanness does not happen by osmosis or accident. The responsibilities and rights that come with being an active, engaged American need to be taught and transmitted — just as Jewish laws, traditions and values are central to a day school education. Instructing students as to why they should know our unique history and system of government — along with pledging fidelity to both our country and our religion — should be common to all day schools, regardless of affiliation or pedagogic outlook.

A daily recitation of the Pledge of Allegiance as well as the Shema would reinforce these parallels and, more important, serve as a daily reminder of our gifts and responsibilities both as Jews and as Americans.

(Abby W. Schachter, a Pittsburgh-based writer, is the author of “No Child Left Alone: Getting the Government Out of Parenting” to be published by Encounter Books in August.)