At Museum of the Jewish People, an iconic exhibit of miniature synagogues breaks new ground 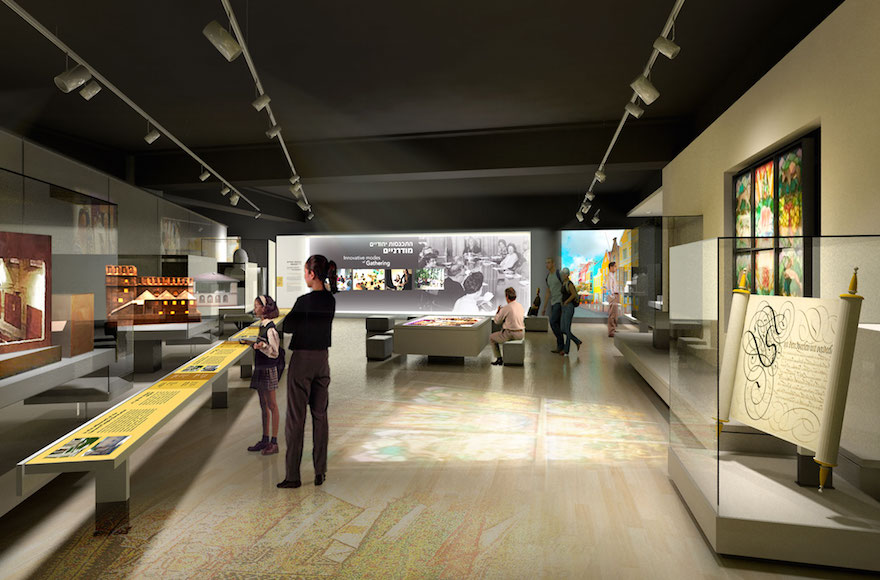 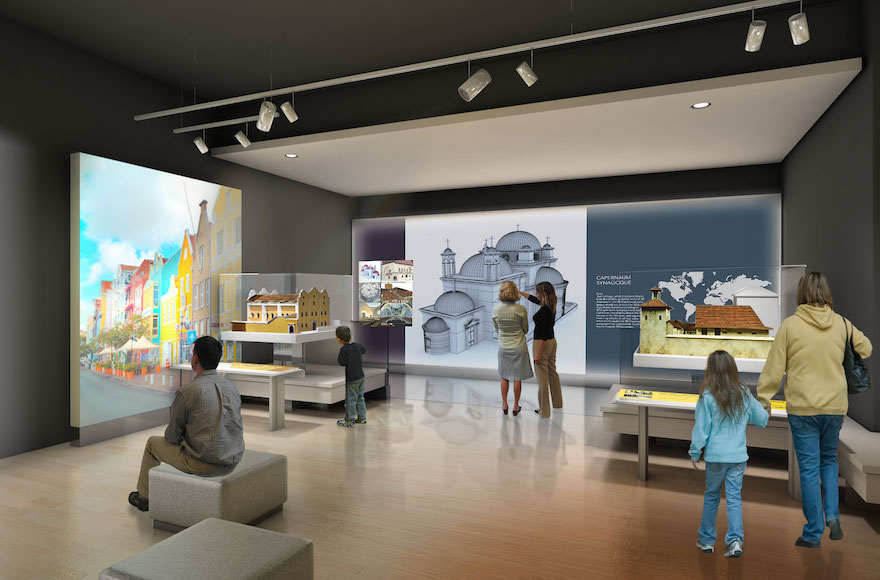 TEL AVIV — In 1978, when Beit Hatfutsot-Museum of the Jewish People opened, it did something big. But it did it in the smallest way possible.

Among the museum’s first exhibits was a gallery filled with 18 miniature synagogues, each as intricate and tiny as a dollhouse. Representing houses of worship from around the world, the Synagogue Hall — like the museum itself — was a picture of global Jewish diversity, its models reflecting the wide range of building styles that house Jewish prayer.

Visitors to the museum gasped at the fine detailing of the curved pews, the twinkling miniature chandeliers and the stunningly diverse takes on the “aron hakodesh” — the holy arks that have stored Torah scrolls for thousands of years. Soon the Synagogue Hall was one of Beit Hatfutsot’s most recognized and most beloved permanent exhibitions.

For nearly four decades, the beauty of these scale models remained unchanged. But technology — and museum patrons’ technological aptitude — has vastly shifted in recent years. So as Beit Hatfutsot-The Museum of the Jewish People this month unveils a massive $100 million overhaul, its most beloved exhibit is getting a high-tech makeover as well.

At the core of Beit Hatfutsot’s relaunch is a desire to evolve from a museum that catalogs the Jews of the Diaspora into a museum that tells the ever-changing story of the entirety of Jewish people — as transient, technology savvy and varied as they may be.

It’s an ambitious makeover, and one that’s been made possible thanks to a generous gift from Alfred Moses, who served as the U.S. ambassador to Romania in the 1990s.

The attorney and philanthropist, himself no stranger to grand synagogues, spent years practicing diplomacy abroad on behalf of the United States. During the many years he was stationed in Europe, he made sure to find time between statecraft to pray at some of the oldest and grandest Jewish houses of worship on the continent.

Moses prayed there for years, and after his return to Washington and his beloved — and significantly more modest — Kesher Synagogue in the Georgetown section, Moses felt he had a new insight on the vast diversity of prayer styles that has shaped Jewish worship across the globe for centuries.

“I’m an observant Jew, and I visited many of those synagogues over the years,” Moses, 86, told JTA in a phone interview. “I have some sense of what life was like, particularly in Eastern Europe for Jews, so I decided to make a pledge.”

Not just any pledge — a gift of $6 million, of which $5 million has been specifically earmarked for the refurbishment of the synagogue gallery.

“Jewish life has both diversity and permanence,” Moses said. “My hope for this exhibition is that it will give visitors a sense of the durability of the Jewish message, and an appreciation of earlier generations and how they expressed their Judaism within the confines of a synagogue.”

The updated and expanded Synagogue Hall features many interactive elements. (Courtesy of Beit Hatfutsot-Museum of the Jewish People)

The new Synagogue Gallery will include the same 18 beloved structures that it opened with, as well as three new models. Each display has been altered to showcase the way in which the structure reflects three specific roles that sit at the heart of a synagogue: social gatherings; studying; work and prayer.

And rather than simply present material in a one-way stream to visitors, the new exhibit — like the rest of the revamped museum — will be fully interactive. It will prompt its audience to consider several questions: What are the forms of creativity that synagogues have fostered in the past and present? Where will Jews congregate as well as think and worship together in the future?

Like the ever-shifting and always debatable definition of what makes a Jew, the physical boundaries of a synagogue are difficult to map and even more difficult to qualify. Acknowledging that modern Jewish communal life occurs in a variety of spaces under a number of pretexts, the new exhibit draws upon all sorts of media to show the modern evolution of the synagogue. A video art installation from artist Ron Slavin will anchor the center of the exhibit, while four animated films, each set in a different time period, will show different types of congregations. Meanwhile, a comedic film starring the Israeli satirist Kobi Arieli will make lighthearted note of the differences in the ways Ashkenazi and Sephardic Jews pray.

READ: From Diaspora to Jewish peoplehood — how an Israeli museum shifted its vision

In keeping with the philosophy of Beit Hatfutsot’s entire overhaul to make the museum a central, interactive portal for the stories of Jews around the world, individual prayer is also an option for visitors. A huge repository of Jewish prayers can be selected by the visitor and forwarded to personal email accounts or smartphones. At the same time, museum patrons are also encouraged to create their own prayers and add them to the database so they can be shared by other guests.

Kids will have the chance to design and build their own synagogue models, and music lovers can select from a number of recordings of “piyutim,” or Jewish liturgical prayers, to listen to the sounds and rhythms of Jewish prayer across the globe.

A stained glass window created in Germany in 1919 by Freidrich Adler along with antique Judaica items, like prayer books and manuscripts, will anchor the exhibit in history.

At its core, the revised exhibition will showcase the individuality of Jewish prayer, and the roles that both private reflection and communal worship have played in shaping the modern face of Judaism.

“Whatever message is derived from the synagogue experience is always an individual message,” Moses says. “A synagogue service means different things to different people. It always will and always has. [The new gallery] is a representation of the fullness of Jewish life — what it was, and what it will continue to be.”