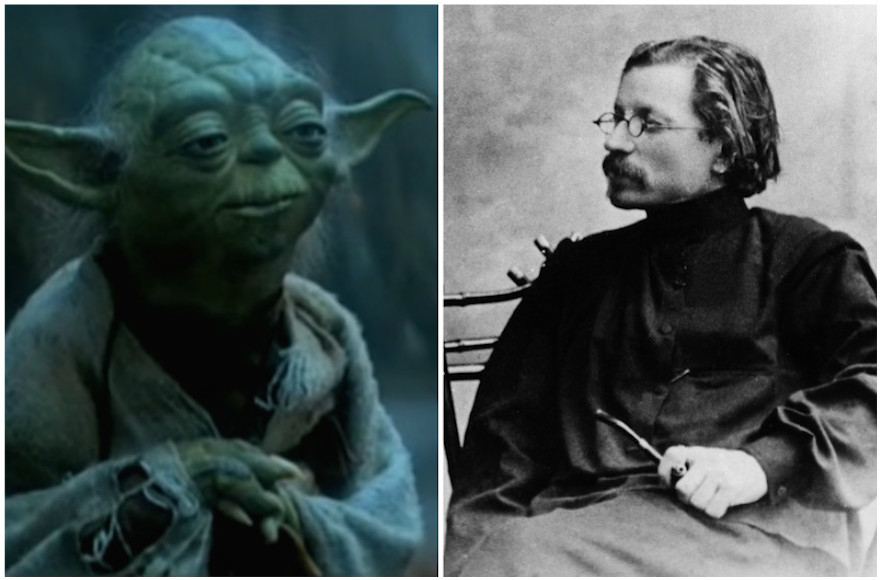 Author Scholem Aleichem, right, was one of the most famous Yiddish writers. Yoda might have been Yiddish too. (Screenshot from YouTube/Ullstein Bild via Getty Images)
Advertisement

(JTA) — Science has finally provided evidence of what Jewish “Star Wars” fans long suspected: Yoda is a member of the tribe — or at least he speaks like one.

The bad news is the science has been widely dismissed as junk.

The Yoda reference appears in a video in which a a 36-year-old Israeli linguist at Sheffield University in England argues that Ashkenazi Jews and the Yiddish language originated in Turkey.

The study joins a number of others published in the past 15 years that challenge the prevailing theory that Jews originated in the Mediterranean Middle East and that Yiddish was developed among Jews in Europe. The research is controversial not only because its critics say it is scientifically weak, but also because it is seen by some to weaken Jews’ claim to the Land of Israel — and is used to this end by some who oppose the Jewish state.

In  a video released in April, geneticist Eran Elhaik explains that Yoda, like Yiddish speakers, uses words from one language, but follows the grammar rules of another. The little green guru speaks strangely constructed English the same way that Yiddish uses German and Hebrew words, but Slavic grammar.

The video is an effort by Elhaik to explain and publicize his study on the origins of Yiddish and Ashkenazi Jews, coauthored by Tel Aviv University linguist Paul Wexler and others and published in March in Oxford University Press’ prestigious journal Genome Biology and Evolution.

According to their theory, the original Ashkenazi Jews lived in a “Slavo-Iranian confederation” and over time developed Yiddish as a secret language to “gain an advantage in trade.” Though they used German and Hebrew words, they kept the Slavic grammar.

As evidence, Elhaik’s study cites a genetic analysis tracing Ashkenazi Jewish lineage to ancient trade routes in northeastern Turkey.  Along the routes  were villages with names that “may be derived from [the word] ‘Ashkenaz,'” according to the study.

The findings made headlines around the world, including in The Independent, Language Magazine and Science Daily.

But some of the world’s most prominent scholars in the fields of both Yiddish and on Jewish genetics quickly rejected the study and condemned its outsized claims as reflective of deteriorating scientific standards and the politicization of research questions about Jewish history.

Shaul Stampfer, a professor of Soviet and East European Jewry at the Hebrew University, said of Elhaik’s research in an email to JTA: “It is basically nonsense.”

Prof. Dovid Katz, founder of Vilnius University’s Yiddish Institute and an author of several books on the language, savaged the study’s linguistic analysis.

“The authors have melded accurate but contextually meaningless genetic correlations with laughable linguistic theories that now proliferate, sadly, as a consequence of a much weakened Yiddish academic environment internationally,” he told JTA. “There is not a single word or sound in Yiddish that comes from Iranian or Turkish.”

A dialect of Yiddish “thrived before there even was a single Slavic-derived word in the language,” he added. “The paper is a fine example of genetics as smokescreen for off-the-wall linguistics.”

In response, Wexler called Katz’s criticism “totally false” and ignorant — and “more of an emotional tirade than a scholarly statement” by someone he said made research breakthroughs in the 1980s “but did not live up to his promise.” Yiddish features “hundreds and maybe even thousands of covert and overt Iranianisms,” Wexler said.

Sergio DellaPergola, a Hebrew University professor who is among the most prominent demographers of the Jewish people, called the study a “falsification” and “one of the big canards of the 21st century.” He criticized its “exceedingly small” sample size and non-inclusion of Sephardi Jewish genes, which he said would have undermined the findings.

A 2014 analysis by Bennett Greenspan, the American founder of a genetic testing company, compared the profiles of nearly 15,000 Sephardic and Ashkenazi Jewish men to non-Jews in the Middle East and Europe. He found a “nearly perfect genetic match” between 75 percent of the Jews and the non-Jewish Middle Easterners.

Had a Sephardic-Ashkenazi analysis been included in Elhaik’s study, it would have shown greater similarity between the two groups of Jews than between Ashkenazi Jews and Turkish non-Jews, DellaPergola predicted. Like most scholars, DellaPergola believes Ashkenazi Jews descend from those who migrated from the Middle East to Europe hundreds of years ago.

READ: Turkish newspaper tries to save a dying Jewish language

Elhaik has ruffled academic feathers before by challenging the accepted notion that Jews originated in the Middle East. In 2013, he published another poorly received study in the journal Genome Biology and Evolution that supported the theory that the Ashkenazi Jews are descended from Khazars — an extinct multi-ethnic kingdom of Iranians, Turks, Slavs and Circassians — who converted en masse in the eighth century.

Popularized in the 1970s by Hungarian-British author Arthur Koestler in his book “The Thirteenth Tribe,” the Khazari theory was championed again in 2008 by Shlomo Sand, a Tel Aviv University historian specializing in cinema, in “The Invention of the Jewish People.”

The theory has little genetic evidence to support it and is regarded as a myth by most scholars.

Whereas Sand and Koestler’s use of science to sell books hardly required a rebuttal, Elhaik is a geneticist being published in prestigious journals, DellaPergola said. He accused Genome Biology and Evolution of failing to critically review the study ahead of publication.

The journal’s editor-in-chief, William Martin, said he “cannot agree to any allegations that the authors … approached the data or the analysis with any element of dishonesty.”

The last word, it turns out, may belong to Yoda. “Many of the truths that we cling to depend on our point of view,” the Jedi master said  — in perfect English.