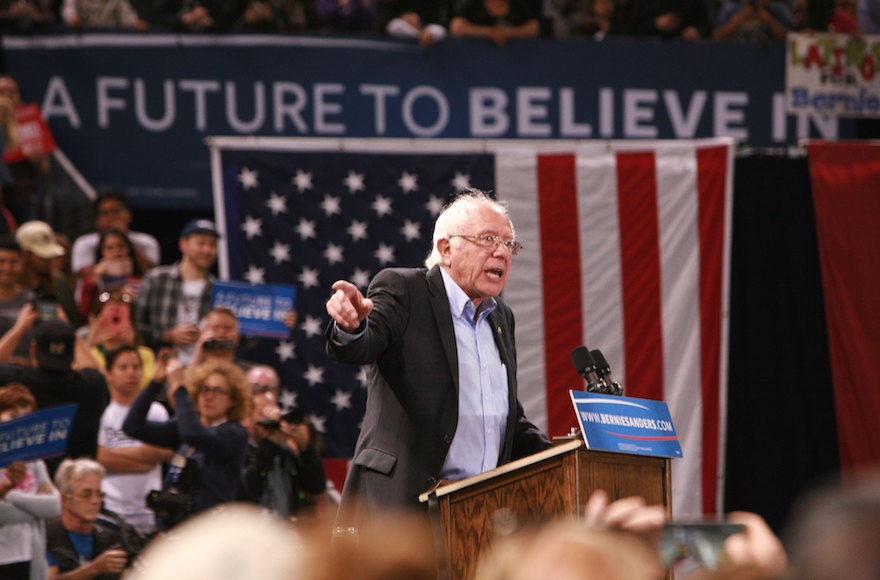 WASHINGTON (JTA) — Bernie Sanders said he expected his views on Palestinians rights to be reflected at the Democratic National Convention, and his appointees to the party’s platform drafting committee pledged to push for acknowledgement of the Israeli occupation.

“I have always and will always be 100 percent supportive of Israel’s right to exist and live in peace and security,” Sanders, the Independent senator from Vermont who is vying for the Democratic presidential nod, said in a statement reported Thursday in the New York Times.

“I also believe that lasting peace in the region will not occur without fair and respectful treatment of the Palestinian people,” he said. “I believe that most Democrats agree with that position and that a strong consensus will be achieved at the Democratic National Convention.”

Sanders, the first Jewish candidate to win major party nominating contests, has said that he is “100 percent” pro-Israel and has argued in left wing circles for the need to preserve Israel’s security. He has also chided fellow Democrats, chief among them his rival, Hillary Clinton, who is the front-runner in the nomination stakes, for not paying enough attention to the Palestinians. He has decried Israel’s settlements policy and has said it uses force disproportionately in dealing with Palestinian violence.

The Democratic party platform has for years favored a two-state outcome to the Israeli-Palestinian conflict, but has also cast that posture on pro-Israel terms, and has laid the blame for the longstanding impasse mostly on the Palestinians.

West and Zogby told the Times that they would make inclusion in the platform that Israel is occupying the West Bank a priority. West said the platform should reflect the “plight of an occupied people.”

“Any honest assessment would say that the debate on this issue has shifted over the last 30 years and the platform has reflected that but lagged slightly behind, and it’s now time to catch up,” Zogby said.

West, who backs the Boycott, Divestment and and Sanctions movement against Israel and is known for his fiery language, told the Times that Israeli Prime Minister Benjamin Netanyahu had committed “war crimes.” He also said “the role of money and lobbies makes it difficult for there to be a candid dialogue.”

Clinton’s delegates include figures who have been aligned with the mainstream pro-Israel community, like former Rep. Howard Berman, D-Calif., and Rep. Elijah Cummings, D-Md. Her top foreign policy adviser, Jake Sullivan, told JTA this week that her views on Israel would be reflected in the platform.

“Hillary Clinton’s views on Israel and the U.S.-Israel relationship are well documented and she’s confident that her delegates will work to ensure that the party platform reflects them,” Sullivan said.