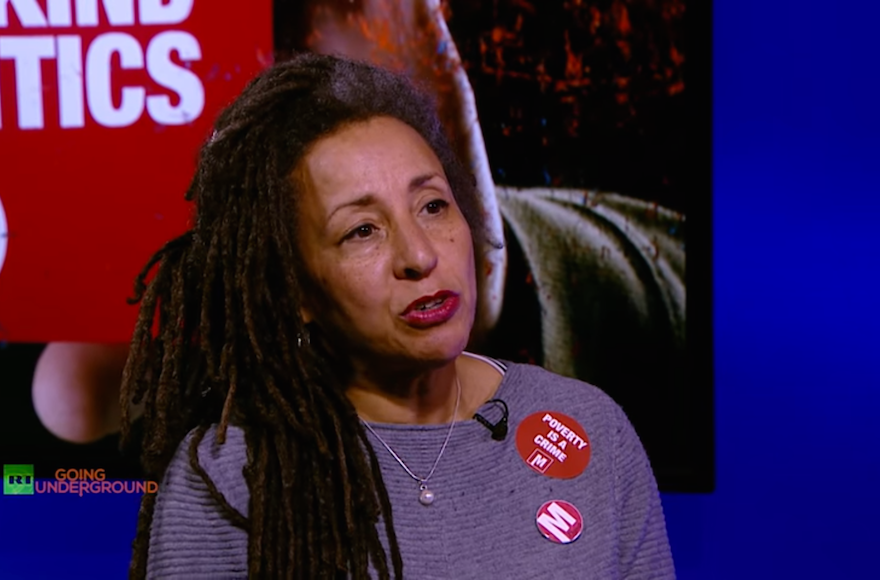 (JTA) — A Labour activist who was suspended from the British party for claiming that Jews were “chief financiers of the sugar and slave trade” has been readmitted to its ranks.

Jackie Walker, vice chair of Momentum, a hard-left group loyal to Labour leader Jeremy Corbyn, was suspended earlier this month after her comments were brought to the party’s attention by The Jewish Chronicle. She was allowed back into the party this week following an investigation, the Jewish paper reported Saturday. A Labour spokesperson said her readmittance was decided on following an investigation.

In a blog post, Walker said she first heard of her suspension from the newspaper.

She went on to to claim that there was an “increasing convergence between Zionists, the right of the Labour party, the Tories and our right-wing media,” adding: “Of course, most want to destabilize and undermine the left — but they’re after much more. Is it coincidence that Sadiq Khan, new London Mayor, full of his new found fame, has already met with the Israeli Ambassador for talks that it is suggested may lead to greater trade links with Israel?”

In the United States, the issue of Jewish complicity in the slave trade has been hotly and exhaustively debated by several Jewish scholars, including Seymour Drescher, a historian at the University of Pittsburgh, who set out to refute in books the assertion made in 1991 by the Nation of Islam movement that Jews had “dominated” the industry. While disputing claims that Jews were a driving force of the slave trade, Drescher and others accept some Jews were significantly complicit in the industry.

Walker’s suspension and reinstatement came amid intense scrutiny by media in Britain and beyond on vitriolic speech within the party against Israel and Jews.

Labour critics who claim such speech has proliferated over the past year in Labour blame Corbyn, a hard-core socialist who in 2009 has called Hamas and Hezbollah his friends, of doing too little to stop this rhetoric or subtly encouraging it, though he has denied this and vowed to purge Labour by suspending and possibly ejecting anyone caught making hateful or anti-Semitic statements.

Approximately 20 Labour activists have been reported suspended by the party in recent weeks, including Ken Livingstone, a former London mayor who last month said Adolf Hitler was a Zionist.

Walker claimed that Labour did not have a problem with anti-Semitism despite a number of members being suspended over anti-Semitic comments.

“Anti-Semitism is not a major problem, the suspension process is,” she said.

Separately, The Guardian on Sunday reported that Corbyn has failed to reply to an invitation from the Labor Party in Israel to Jerusalem to see the Yad Vashem Holocaust museum. The Israeli Labor head, Issac Herzog, extended the invite after Livingstone’s statement.

Wes Streeting, a Labour lawmaker who met with Corbyn last week to discuss rising anti-Semitism within the party, said: “It should be a matter of common courtesy to reply to a letter from the leader of one of our sister parties, particularly on an issue as important as tackling anti-Semitism. But this is fairly typical of the flat-footed and lackadaisical attitude that we’ve seen from the outset. It is simply unacceptable.”

Earlier this month, Labour officials cautioned a local politician from Birmingham who said that British support for Israel is fueling the popularity of the Islamic State terrorist group, the Chronicle reported. Waseem Zaffar, who sits on Birmingham City Council, was also filmed accusing the Israeli government of backing “state-supported terrorism” and calling for a boycott of Israel.