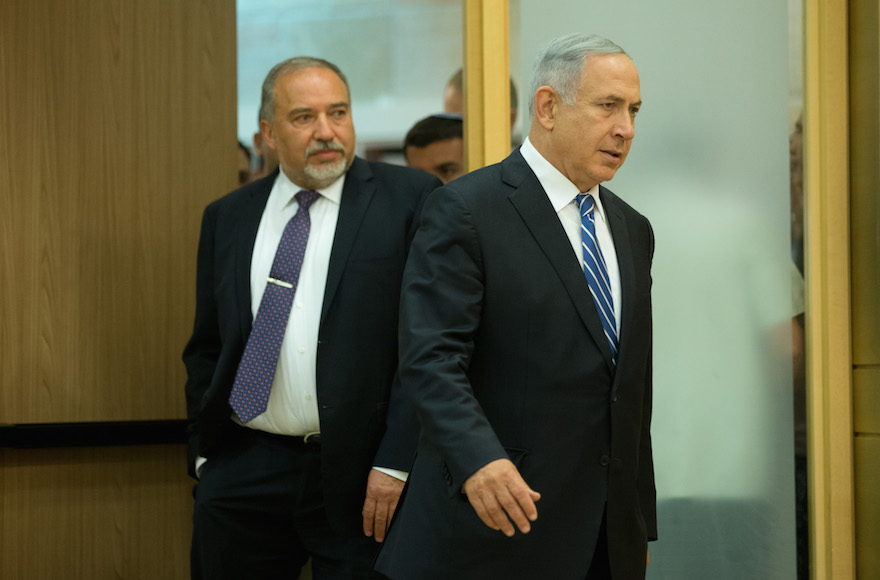 (JTA) — Prime Minister Benjamin Netanyahu of Israel said he accepted some elements of the so-called Arab Peace Initiative as a basis for talks on resolving the Israeli-Palestinian conflict.

“The Arab Peace Initiative includes positive elements that can help revive constructive negotiations with the Palestinians,” Netanyahu said Monday evening at the Knesset in Jerusalem. “We are willing to negotiate with the Arab states revisions to that initiative so that it reflects the dramatic changes in the region since 2002 but maintains the agreed goal of two states for two peoples.”

Also known as the Saudi Initiative, the plan adopted by the Arab League in 2002 calls for Israel’s withdrawal of land captured in 1967 and a “just settlement” of the Palestinian refugee issue in exchange for full normalization of ties between Israel and the league’s 22 member states. Critics of Israel’s response to the proposal argue that Jerusalem never gave its answer to the offer.

Critics of the proposal have said the language on Palestinian refugees is too vague given what Israeli prime ministers, including Netanyahu, have described as the Palestinian leadership’s dream of ending Israel’s existence as a Jewish state by flooding it with people whom the United Nations and the Palestinian Authority consider refugees. They have also maintained that withdrawing from the Golan Heights would expose Israel to excessive risk.

But Netanyahu said Monday that he welcomed Egyptian President Abdel Fattah el-Sissi’s offer in a speech earlier this month to help broker a peace deal with the Palestinians, with help from other Arab states.

“We welcome the recent speech by Egyptian President el-Sissi and his offer to help advance peace and security in the region,” Netanyahu said.

“It creates a genuine opportunity that obligates us to pick up the gauntlet,” he said. “I certainly agree that in the Arab Peace Initiative there are some very positive elements that will enable us to conduct serious dialogue with our neighbors in the region.”

Neither Netanyahu nor Liberman mentioned the Paris summit taking place next week being hosted by France’s foreign minister, Jean-Marc Ayrault,  devoted to discussing a French initiative for talks. Israel opposes the premise of the summit because it reportedly sets a deadline, after which France has said it will recognize a Palestinian state regardless of the outcome in Paris.

Netanyahu also has objected to the absence of direct talks between Israel and the Palestinians in the details of the proposal.