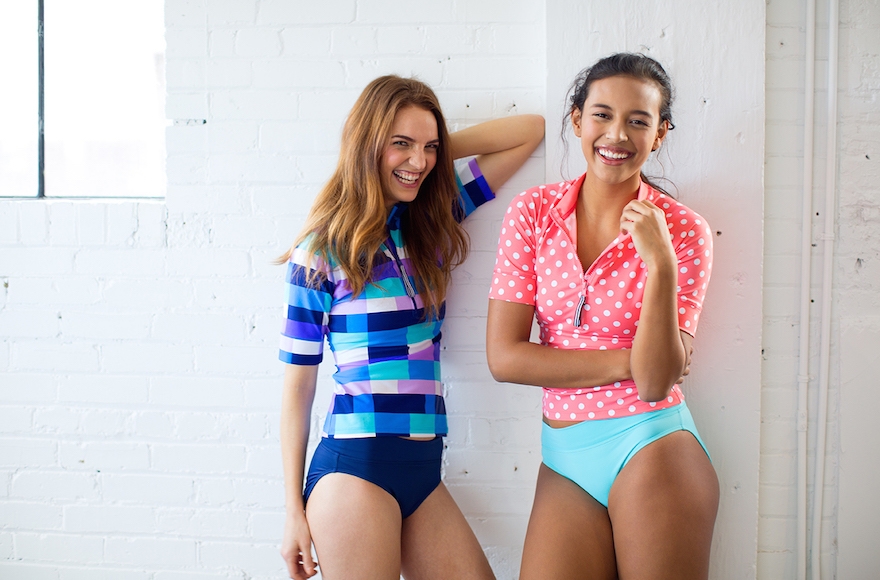 Lime RickI sells swimwear that is fun, fashionable and covered-up, like these colorful rash guards. (Courtesy of Lime Ricki)
Advertisement

(JTA) — Sara Wolf was running around a water park in an oversized T-shirt when she became acutely aware of the need for a “less frumpy” yet covered-up swimwear option. So she and Daniella Teutsch, a former fashion industry colleague, launched HydroChic, a swimwear company for women who want to enjoy the water and stay modest at the same time.

“The only options we were finding were these long, flowery dresses that just weren’t our style or skin-tight surfing-style wetsuits,” Wolf says.

The company specializes in casual, sporty mix-and-match tops and bottoms. The tops come in all sleeve lengths — from sleeveless to long sleeves — and the bottoms are pants, skirts, shorts or skorts of different lengths, too.

HydroChic, Wolf says, has grown by 20 percent every year since it started in 2007. And it’s not alone — modest swimwear is taking off in a big way. In fact, according to the fashion website Refinery 29, some of the most stylish bathing suits of the season are of the more covered-up variety; some are even long-sleeved.

High-end designers like Tory Burch and Nanette Lepore are selling bathing suits with sleeves extending down to the wrists. Major retailers are in on the act, too: The offerings from Athleta, for example, as well as Land’s End, run the gamut from swim dresses to shorts and rash guards.

From evening gowns to streetwear and swimwear, modesty is having a bit of a moment. Modest bloggers are enjoying widespread popularity, while “style stars” such as Alexa Chung and Olivia Palermo are frequently seen wearing more covered-up looks. Clothing brands are increasingly selling modest clothing, from high-end labels like Mary Kate and Ashley Olsen’s Elizabeth & James to modest-specific websites such as Modli to mainstream companies like Uniqlo. Even on red carpets, celebrities like Cate Blanchett and Julianne Moore are showing less skin. 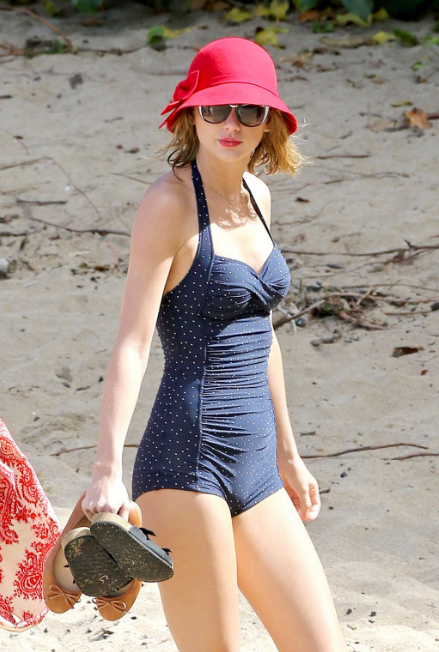 “I would dare to say that there is a quiet social revolution taking place in which women are saying that they value privacy and they are tired of unrealistic expectations about their bodies,” Wolf says. “They are protesting being constantly bombarded with oversexualized messages. They want to be seen and heard for who they really are, their inner voice, and not just for a first physical impression.”

Vintage-syle bathing suits, in particular, are making a comeback. (Taylor Swift, for one, is a fan of the retro look — she’s known for donning high-waisted bikinis and has even been spotted in skirted numbers.)

But modesty, of course, is relative. Many of the season’s chicest offerings aren’t quite up to Orthodox Jewish standards, as they don’t cover arms to the elbows or legs down to the knees. (There are counter trends in play, too, including the advent of the so-called “Brazilian bikini.”) Still, for those who already were in the habit of showing less skin, suddenly they’re not the odd woman out amid a sea of bare flesh.

“Thanks to the popularity of rash guards, you can blend in more when you wear these tops with more coverage,” says Allison Josephs, the founder of the website Jew in the City.

For Josephs, who didn’t grow up Orthodox, old habits die hard — she still dons a bikini if she and her husband are alone at a private beach. But the modest skirt-and-top combinations are “great for throwing over my bikini and wearing in hotel pools and around mixed swimming. Though it’s another layer, they’re breathable layers that dry easily.”

The increasing popularity of more modest swimwear is partially the result of increased awareness about sun safety and UV protection — after all, nobody wants skin cancer or wrinkles.

But whatever the reason, it’s clear that covering up is a trend — and not just among religious women.

“When we started, about 85 percent of our customers were modern Orthodox,” Wolf says. “Now I’d say that number is closer to 15 or 20 percent.”

Lime Ricki’s Bruderer, who runs her company with her sisters, was raised Mormon. (The religion has no explicit rule as to what is appropriate swim attire, she says, but Mormon women tend to steer clear of skimpy suits.) About half their customers are Mormon, she says.

“Bathing suits with more coverage are a trend right now,” she says.

Jessica Rey, a Christian actress and designer, creates what she describes as Audrey Hebpurn-inspired demure bathing suits, selling all sorts of skirts to go with them. While Rey Swimwear, like Lime Ricki’s line, wouldn’t tick the right boxes for the most observant Jewish women, her motto is “Who says it has to be itsy bitsy?”

In a video on YouTube titled “The Evolution of the Swimsuit,” Rey says she wants people to understand that you can dress modestly without sacrificing fashion.

“Modesty isn’t about hiding ourselves, it’s about revealing our dignity,” she says.

Bruderer says: “I think it’s really empowering to women to know they can choose whatever they feel comfortable in.”

And now, even for the most modest of dressers, “there are a lot more options,” Josephs adds. 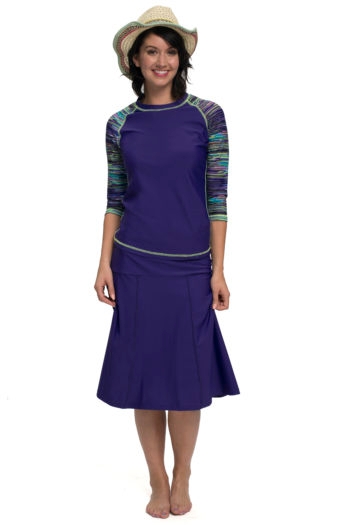 “When we started our company, we had mostly black simple options,” says Rachel Tabbouche, who with her sister and mother runs Undercover Waterwear, a company with an array of Orthodox-approved swimwear. “But we’ve expanded and have all sorts of bright colors and different styles now.”

(Tabbouche’s offerings are a long way from the black “skvimkleid,” or swim dress, a muumuu-style outfit popular with Hasidic women. The garment was parodied on a popular YouTube video several years ago about a turban-wearing woman taking a trip to Miami with friends.)

Tabbouche’s family started Undercover Waterwear in 2002 after finding themselves hard pressed to find fashionable, comfortable and modest options for their summers spent on the Jersey Shore.

The outfits are made of a chlorine-proof swim fabric just like ordinary bathing suits and are a far cry from the baggy T-shirts that women improvised with just a few years ago. Plus they have UPF 50+.

“Women always tell us that they have people coming over to them and asking where they got them,” she says.

Business has grown, according to Tabbouche. And though “everything is in Hashem’s hands,” trends are working in their favor. “Modest women feel more comfortable to take risks in their fashion,” she says.

“When we started, we associated modest with frumpy,” Wolf says. “We didn’t even want to use that word. But now, modest seems to be hottest.”