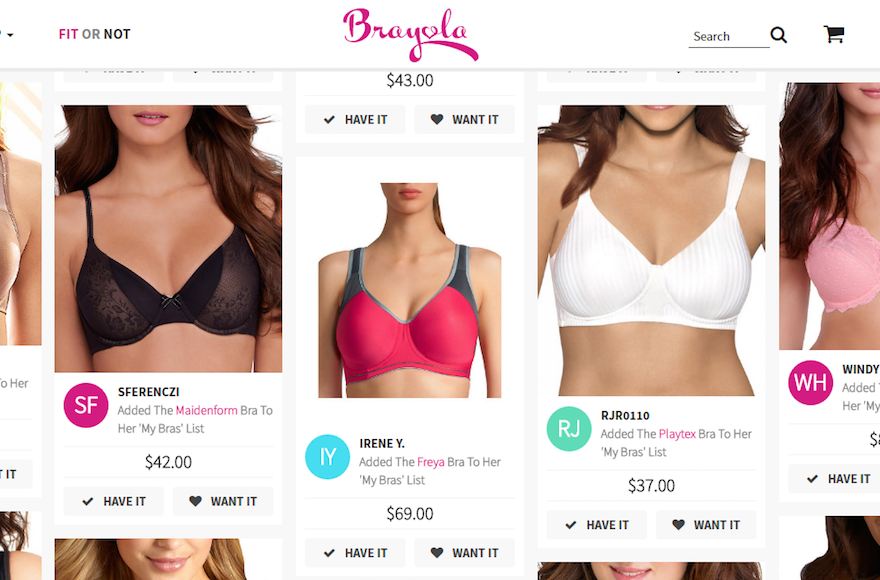 (JTA) — They say the best stories happen when a writer gets pushed out of his or her comfort zone.

Since the “they” in this case was my editor, this is how I found myself readying to post a topless photo of myself online — all in the name of good journalism.

But this isn’t a story about — well, whatever you’re thinking it’s probably about. Rather, this was an investigation into a legit Israeli startup, Brayola, a social network for lingerie shopping. The site, which also sells and ships bras, just received $2.5 million in Series A funding from HDS Capital and FirstTime Capital.

Still, when I told colleagues that I was working on a story about a website that involves uploading bra selfies and crowdsourcing underwear advice, I was met with concern.

“Are you sure this isn’t a site started by perverts?” said one.

“Teenage boys are behind this, right?” asked another.

Answers: Yes. And no. There’s a dedicated businesswoman behind Brayola, Tel Aviv-based Orit Hashay, who is a former venture capitalist with a background in software engineering. And while the premise veers rather close to “Tinder for bras,” the inspiration is far more wholesome. Really.

A few years ago, Hashay was eager to enter Israel’s startup fray and had been casting about for an idea. She knew she wanted to create a consumer-oriented site, something focused on women, when inspiration struck. 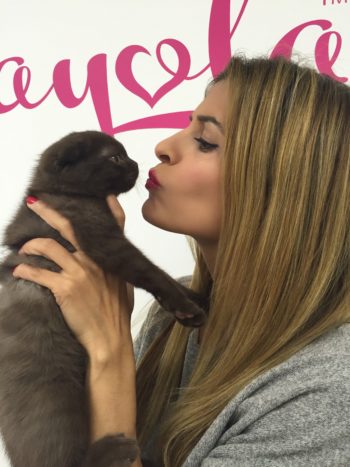 “There was absolutely nothing about the thing most difficult to buy,” she realized. “You can buy everything online — food, clothes for my kids, anything. But for bras, you only go to the store and buy the same one again and again.

“I hate bra shopping,” she added. “I don’t like somebody touching me.”

And so in 2013 she launched Brayola, which now has offices in New York, Tel Aviv and Manchester, England. The site promises to match users with the ideal bras for their size, shape and preferences by analyzing the reviews of millions of women. Enter your stats and favorite lingerie makes and models, and Brayola will suggest a “perfect match” — or several — for you.

Essentially its “crowdsourcing women about the bras they have in their sizes,” Hashay said. “I love to think that I’m special and unique — but I’m not so unique that the bra that I have in my drawer, there aren’t other women with the same bra, the same size in their drawers.”

There’s also a marketplace where users can purchase “perfect matches” directly from the site, saving bra shoppers the presumed indignity of being touched by a lingerie sales clerk. The recent infusion of funding will be used to double the number of available brands and inventory, Hashay said, along with increasing the site’s marketing and reach.

Tapping the wisdom of the crowd is something I can get down with. But posting a photo of my breasts and bra — to be clear: no faces allowed — on the internet? Not so much. So I nearly wept with relief when I learned that the “Fit or Not” part of the Brayola experience — women upload a bra selfie and let real-life women, not an algorithm, perform the scrutiny — was strictly optional.

There were pleasant surprises regarding Brayola’s “Fit or Not” function: Contrary to my jaded expectations, comments on the site are not loaded with vitriol or innuendo — they tend to be of the instructive “try a bigger cup size” sort. Additionally, while one might think only the Kardashian-like nubiles would participate, the actual users (and there are some 150,000 of them, Hashay said) are apparently of every age and size.

Instead of uploading photos of myself, I logged into Brayola and created a profile that consisted of my size and my favorite bras. Fortunately, I just recently had a transformative bra-shopping experience at Lord and Taylor, where I was briskly but accurately measured on the sales floor. So I was quite confident in my size and preferences. (Shout out to Wacoal! Why did it take me so many years to find you?)

Next, “My Bra Shop” showed me various brands and styles favored by women with my size and taste. Five were deemed “a perfect match.” A Le Mystere number was positively drool-worthy but, at $76, a bit out of the budget. One had a sheen that I didn’t care for; others weren’t available in my preferred color, black, in my size. So I purchased a Warner’s racerback bra that was lightly padded — something I usually don’t go for; who needs that extra one-eighth of an inch? — but I was eager to trust my fellow comrades-in-boobs.

One week later, my bra arrived in the mail. And, well, let’s just say that even though this story didn’t involve topless photos, it still has taken me out of my comfort zone. My “perfect match” just … wasn’t. It was more a bra I’d have a dalliance with. It’s not horrible; it’s a little too snug around the rib cage, and the straps angle in a way that’s not compatible with much of my wardrobe. Nonetheless, it’s something I’ll continue to reach for, mostly because it’s there and does the job well enough.

Brayola draws upon data to suggest a “perfect match” based upon the user’s size and preferences. Bras can also be purchased directly from the site. (Courtesy of Brayola)

Still, I understand the huge potential in the concept, particularly among women who abhor the brick-and-mortar shopping experience — admittedly, I am not one of them — and largely because of the international reach of the site.

Yet their behavior is different. Women in the UK, said Hashay, typically buy more bras then their American sisters. In Israel, the biggest issue is the high price tag — a Chantelle bra that retails for $48 on Brayola is around $150 in Israel, she said. (At the moment, Brayola only ships to the U.S., but Hashay said that will change soon.)

Ultimately there’s something about undergarments, an everyday necessity thats unite women around the globe. Because no matter where you are — or what you believe, or what your age and body shape may be — you’re gonna need something to keep the girls up.

“I’m Israeli, but maybe my body, my style, my taste is like somebody who lives in Poland, or in Italy,” Hashay said.

Her enthusiasm is contagious, and Hashay one day hopes to bring crowdsourcing to another equally fraught garment: jeans.

For now, however, she’s focused on a future in which buying bras is as easy as shoe shopping.

“Women will have as many bras as shoes,” she said. “This is what I want.”

READ: Covered-up chic — modest swimwear is having a moment