In calling out ‘Mexican’ judge, it’s Trump vs. the American legal system 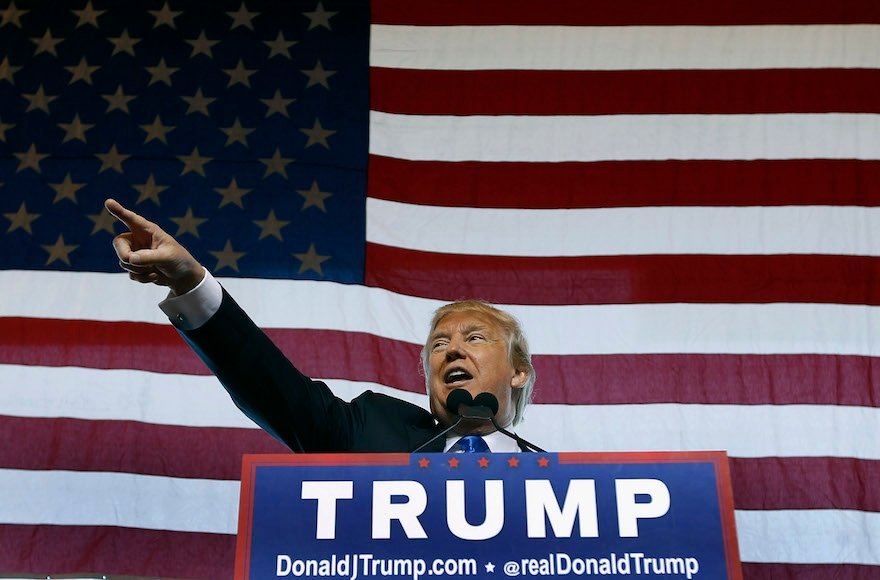 Donald Trump speaking to the crowd during a campaign event at the International Air Response facility in Mesa, Arizona, on Dec. 16, 2015. (Ralph Freso/Getty Images)
Advertisement

The media is out to get him, he says. He has cast Muslims as a threat, proposing to ban them from the United States following last December’s deadly San Bernardino terrorist attack. And Mexican immigrants, in Trump’s view, include “rapists” and should be walled off from the United States.

So it only makes sense, the presumptive Republican nominee for president argues, that Judge Gonzalo Curiel should recuse himself from the class-action lawsuit he’s hearing against Trump University and Trump himself for breach of contract, fraud, negligent misrepresentation and bad faith. The judge, Trump charged last week, has “an absolute conflict” because he’s “of Mexican heritage.” Curiel was born in the United States to Mexican immigrant parents.

There’s a certain logic to Trump’s argument. Doubtless, Trump’s dire warnings about Mexican immigrants, starting with his campaign’s launch event last June and extending to his oft-repeated pledge to build a wall between the United States and Mexico (and get Mexico to pay for it), hasn’t endeared him to Mexican immigrants or their families.

But why stop at disqualifying a judge for his Mexican heritage? By Trump’s circular logic, he can disqualify any judge simply by insulting his or her identity.

Trump already told the CBS news program “Face the Nation” that a Muslim-American judge might be biased against him, too, given his views on Muslims and Islam. (“I think Islam hates us,” Trump said in March).

Trump’s attacks on Curiel have managed to unite critics on the right and left, who note that in America, judges are meant to apply the principle of “judicial temperament” to ensure that justice is blind: Cases are to be decided on the merits, not because of how someone looks, where their parents came from or whom they like to have sex with. Questioning the impartiality of judges based on their religion, race or ethnicity undermines America’s judicial system, these experts argue.

“The accusation that a judge is biased or unqualified to hear a case because of his or her religion or ethnic heritage flies in the face of America’s pluralistic ethos,” David Bernstein, president of the Jewish Council for Public Affairs, told JTA in an email. “It suggests that our judges and public officials are inherently biased by their national origins and cannot apply the law fairly to people with different backgrounds.

Many before Trump have argued that a judge should recuse himself or herself on the basis of race, religion, sexual orientation or national origin.The difference is defendants usually contrast their identity with the judge’s — say, a white defendant appearing before a black judge in a bias case, or a Palestinian woman before a Jewish judge with known pro-Israel sentiments.

And while such appeals have rarely worked,  that hasn’t stopped defendants and complainants from trying, including with Jewish judges.

In 2014, Rasmea Odeh, a Palestinian resident of Chicago on trial for immigration fraud, argued that the judge hearing her case, Paul Borman, should be disqualified because his Jewishness and Zionism made him unfit to render a fair verdict. Lawyers for Odeh, who was indicted for failing to note on her U.S. citizenship application that she had served time in an Israeli prison on terrorism charges, pointed out that Borman had received an award from the Jewish Federation of Metropolitan Detroit for his pro-Israel activity.

The petition was denied.

“Like every one of my colleagues on the bench, I have a history and a heritage, but neither interferes with my ability to administer impartial justice,” Borman said.

Ironically, Borman ended up recusing himself anyway after learning that he had family members who were among the owners of a supermarket that had been bombed in 1969 by the Palestinian militant group with which Odeh had been affiliated. Odeh ended up losing her case and her U.S. citizenship, and she was sentenced to prison and ordered to be deported after her term. She remains free pending appeal.

The precedent-setting case when it comes to judicial temperament involved an African-American district judge in Philadelphia in 1974. A. Leon Higginbotham was asked to recuse himself from a racial discrimination case because he was black and had spoken in support of black civil rights.

Higginbotham’s eloquent defense of his position often has been recalled by judges facing similar calls to step down. If a judge’s identity as a minority American and record of support for minority rights were enough to disqualify him from a case involving a minority or discrimination, minority judges constantly would be removed from cases – which itself would be discriminatory, Higginbotham reasoned.

“Under defendants’ standards, if a black judge discusses race relations, he should thereafter be precluded from adjudicating matters involving specific claims of racial discrimination,” Higginbotham wrote in his decision to deny the request. “To suggest that black judges should be so disqualified would be analogous to suggesting that the slave masters were right when, during tragic hours for this nation, they argued that only they, but not the slaves, could evaluate the harshness or justness of the system.”

In 1998, lawyers tried to disqualify an Asian-American judge, Denny Chin, because some of the defendants were Asian. They failed, and one of the lawyers in the case was sanctioned. In 2011, lawyers in California argued that the decision by a federal judge to strike down the state’s gay marriage ban should be vacated because the judge, Vaughn Walker, was gay. Again, no dice.

“Our judiciary reflects the diversity that makes America great, and just as whoever we elect to the presidency takes an oath to uphold our Constitution, so does every judge, regardless of their race, religion, ethnicity, and sexual orientation,” Anti-Defamation League CEO Jonathan Greeblatt said in a statement sent Tuesday to JTA. “Anyone who aspires to high office in our country, including Donald Trump, should understand that one key responsibility of leadership is to demonstrate respect for judicial independence as a key element of the American legal system.”

The question now isn’t whether Trump’s attack on Curiel will have the effect of removing him from the case; it most certainly won’t.

The question is whether, having proved far more popular with voters than most expert analysts ever expected, Trump wins in the one court that could matter most of all: that of public opinion. That test will come on Nov. 8, when Americans go to the ballot box.