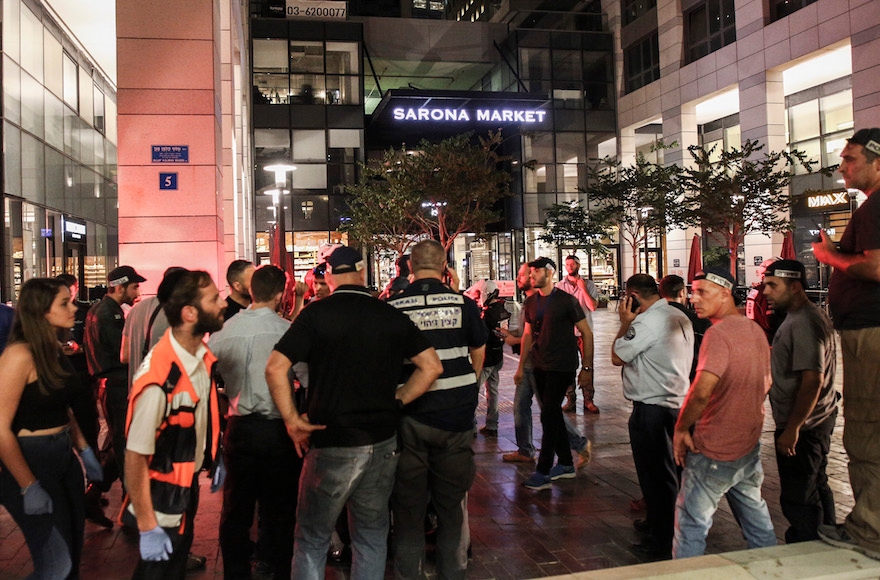 (JTA) — Four people were killed and three were seriously injured in a shooting at an outdoor shopping center in Tel Aviv.

Two gunmen carried out the apparent terror attack and were shot and disarmed, according to the police.

“One is wounded, the other’s condition is unclear at the moment. All these details are preliminary,” said police spokeswoman Merav Lapidot.

Speaking from Ichilov Hospital, where the wounded, including one of the shooters, was being treated, Tel Aviv Mayor Ron Huldai said the shooters “fired indiscriminately.”

“I’m asking the public to stay calm,” Huldai said. “Tel Aviv-Jaffa has been for years a target of terror that tries to disrupt our lives. We’ll continue to live in this city, to create and build. No terror will defeat us. We will continue to seek peace.”

Police confirmed reports that the gunmen came from Hebron, but declined to identify them by name. The Palestinian media reported that one alleged assailant was identified as Khaled Muhammad Musa Sh’hadeh Salameh and the other is his brother. According to The Times of Israel, one was on the watch list of Israel’s security agency, the Shin Bet, and both were in Israel illegally.

The Magen David Adom rescue service said it took nine victims to Tel Aviv hospitals. One said to be in critical condition died at the hospital; three others were in serious condition.

Yousef Jabarin, a bartender at the Max Brenner Restaurant in Sarona Market, told The Times of Israel that the shooters arrived there about 15 minutes before the attack and ordered the “milky brownies.” Without eating anything, they then stood up and began shooting, using what looked like pistols.

Jabarin said the attackers were dressed as “warriors” in black suits, white shirts and skinny ties — attire that indicated to Jabarin, an Arab citizen of Israel, that they hailed from the West Bank.

Soon after the shooting, Hamas leader Ismail Haniyeh posted several tweets praising the attack. Apparently believing one of the attackers had died, he called him “a hero.”

The United States in a statement condemned the “horrific terrorist attack in the strongest possible terms.”

“We extend our deepest condolences to the families of those killed and our hopes for a quick recovery for those wounded,” State Department deputy spokesman Mark Toner wrote. “These cowardly attacks against innocent civilians can never be justified. We are in touch with Israeli authorities to express our support and concern.”

A popular retail and dining hub, Sarona Market was cited in April for security and safety violations. According to The Jerusalem Post, the problems — including the way security guards were inspecting visitors at the entrance — were corrected within 24 hours.