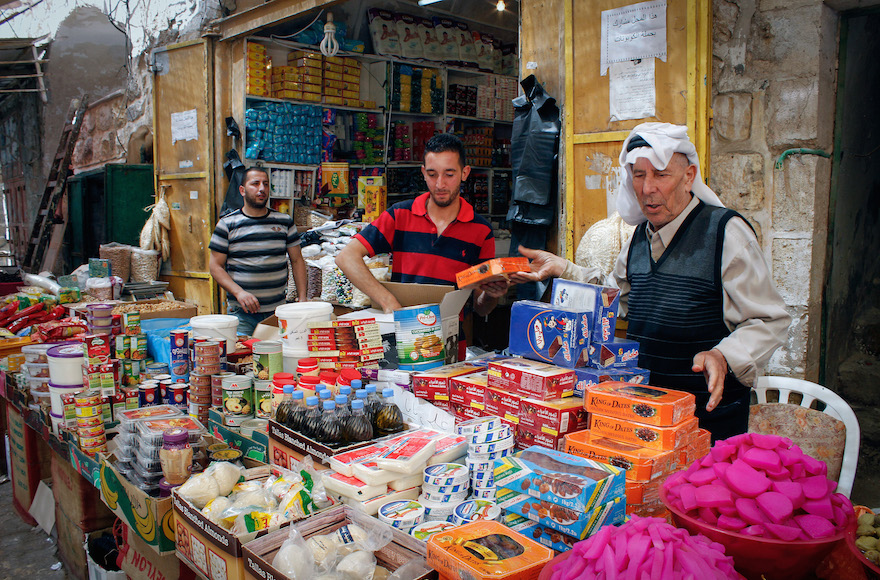 Palestinian vendors selling goods ahead of the holy month of Ramadan in the old city of the West Bank city of Hebron, June 5, 2016. (Wisam Hashlamoun/Flash90)
Advertisement

JERUSALEM (JTA) — Israel does not know how many Palestinians are living in Area C, the part of the West Bank under Israeli civil and military control, the Civil Administration told a Knesset committee.

The Civil Administration relies on figures provided by the Palestinian Bureau of Statistics, which does not break down the figures by area. On Wednesday, its representative told the Foreign Affairs and Defense Committee’s subgroup on Judea and Samaria that the Palestinian figures could be inflated in order to maximize the amount of international aid the Palestinian Authority receives.

Moti Yogev, a member of the right-wing national religious Jewish Home party, heads the subcommittee. Jewish Home has called for the annexation of Area C, which is where most Jewish settlements are located.

Agricultural Minister Uri Ariel of Jewish Home told The Times of Israel Tuesday that the Jewish state “must aspire to the annexation of Area C”  and expel the Palestinians who live there.

“We would remove a few thousand, who do not constitute a significant numerical factor,” he told the Times of Israel.

Ariel is the head of the far-right Tekuma faction in the Jewish Home party; Yogev also is a member of that faction. Ariel told the Times of Israel that he agrees that the Jewish Home party should leave the government coalition if Israel agrees to cede land to the Palestinians during peace talks.

“There is no way that we remain in a government that takes territory from the Land of Israel and hands it to others — the word ‘return’ isn’t appropriate — it’s ours, not theirs,” he said. “We have been there [in the West Bank] for 49 years, 50 years — compared to 19 years in which the Jordanians [controlled it.] There can be no comparison. It’s absurd.”

Yogev ordered the Civil Administration to return in two weeks with more solid figures on the Palestinian population in the West Bank.