‘America First’: Trump doubles down on a term that makes many Jews queasy 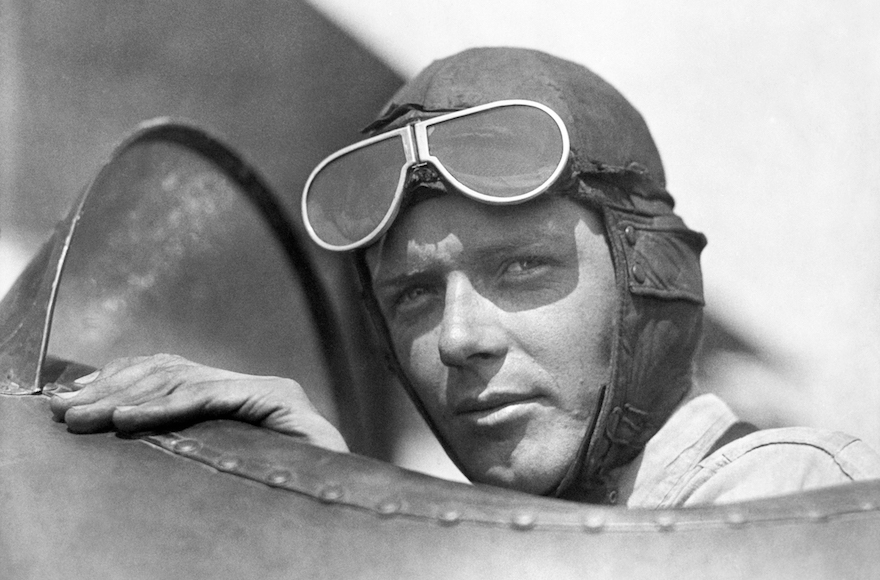 Charles Lindbergh, wearing a helmet with goggles up, in the cockpit of an airplane at Lambert Field, St Louis, Missouri, 1923. (Underwood Archives/Getty Images)
Advertisement

Donald Trump is doubling down on “America First.”

After Trump used the term “America First” in late April to describe his policies, the Anti-Defamation League sent him a letter urging him to drop the historically tainted slogan — speaking for Jews and others who remember it as the name of the isolationist movement championed by a notorious anti-Semite to keep the United States out of World War II.

But in a speech Tuesday night following his victories in the last six state primaries, the presumptive Republican nominee for president made clear he’s not about to take the ADL’s advice and abandon the slogan.

“It’s important to understand what ‘America first’ means,” Trump said in his speech, as if directly addressing critics of his use of the term.

At its core, Trump’s policy shares some elements with the isolationism promoted 75 years ago by leaders of the America First Committee.

Created in 1940 after Hitler already had invaded Poland, the America First Committee argued that the U.S. should take a neutral approach toward Nazi Germany, and even do business with it, because the Nazi regime did not threaten America directly. Among its most noteworthy leaders was aviator Charles Lindbergh, who publicly espoused anti-Semitic viewpoints. Lindbergh warned that Jews posed a threat to the U.S. because of their influence over the media, movies and government.

The echoes of the America First Committee in Trump’s own America First policy include but are not limited to foreign policy. Lindbergh argued in 1941 that America shouldn’t help Britain because Britain was destined to lose the war and the effort would deplete America’s defenses. Trump says he would not have intervened in Libya to topple Libyan strongman Muammar Gadhafi (though video from 2011 recently surfaced showing Trump endorsing U.S. intervention in Libya) and he opposed the war in Iraq.

As Lily Rothman has noted in Time, Lindbergh, like Trump, said he had the backing of a silent majority of Americans who weren’t being given voice by a hostile media. Back in 1941, Lindbergh fingered the Jews as the culprits, saying they were pushing the U.S. toward war through their control of the media. In this year’s campaign, Trump believes the media is against him, too – not because they’re Jews but, he says, because they’re liars.

Over time, the America First Committee’s strength waned. Though the movement, in a bid to cast off its anti-Semitic reputation, tried to advance the argument that it was looking out for the best interests of America’s Jews, many moderate isolationists steered clear.

Evidence suggests a growing majority of Americans supported U.S. intervention in the war, and the argument became moot on Dec. 7, 1941, when Japan bombed Pearl Harbor. The next day, President Franklin D. Roosevelt called for and received a formal declaration of war from Congress.

“The period of democratic debate on the issue of entering the war is over,” America First Committee chair Robert Wood said. “[The committee] urges all those who have followed its lead to give their full support to the war effort of the nation, until peace is attained.”

The term America First cropped up again from time to time after that. In 1944, a group called the America First Party ran a candidate for president; the nominee got less than 2,000 votes nationwide. A write-in candidate in the 1960 presidential campaign also used that party name (winning even fewer votes than the 1944 nominee).

And in 2002, a group of activists who supported Pat Buchanan – a man many Jews consider anti-Semitic – broke off from the Reform Party to start a new America First Party. The party was pro-life, anti-gun control and anti-immigration. Its candidates went nowhere.

But even without sharing the least palatable goals of the original America First Committee, Trump seems keen on resurrecting a term with notorious baggage.

“[F]or many Americans, the term ‘America First’ will always be associated with and tainted by this history,”ADL CEO Jonathan Greenblatt said in April. “In a political season that already has prompted a national conversation about civility and tolerance, choosing a call to action historically associated with incivility and intolerance seems ill-advised.”

In calling out ‘Mexican’ judge, it’s Trump vs. the American legal system