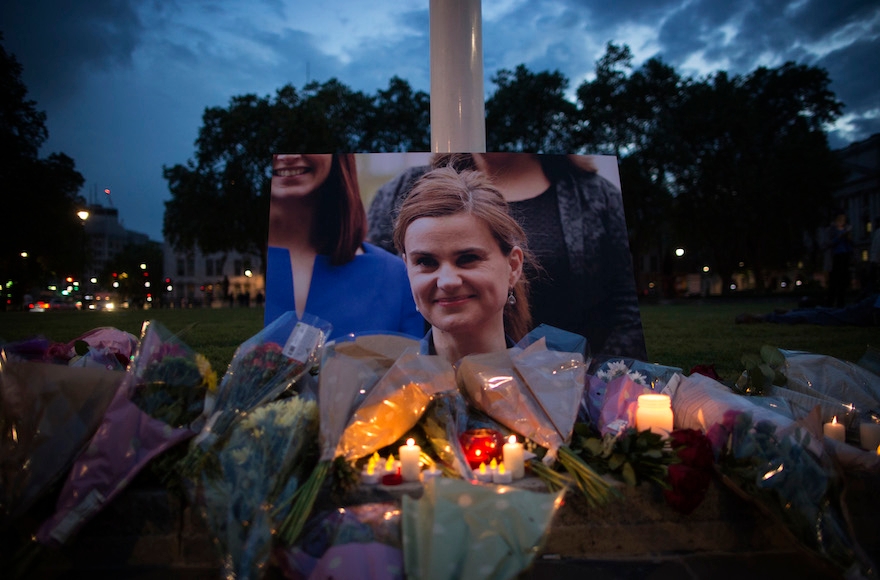 (JTA) – The man whom authorities believe killed British lawmaker Jo Cox Thursday is said to have a history of involvement with an American neo-Nazi organization.

The New York Times reported Friday that hate group watchdog the Southern Poverty Law Center, said the suspect, who has been identified by neighbors and family members as Thomas Mair, 52, in 1999 purchased $620 worth of materials from a publishing imprint of then-leading neo-Nazi group the National Alliance.

Cox, 41, was shot and stabbed several times on the street in the northern English town of Birstall on Thursday. A member of Labour, she was a vocal advocate for Britain remaining in the European Union and openly criticized her party’s leadership for not doing enough to fight anti-Semitism within the party.

She was the first sitting member of Parliament to be killed since 1990, according to the Times.

What would have motivated her suspected murderer is still unclear.

In addition to his ties to the National Alliance, Mair was also on a 10-year-old list of subscribers to a South African magazine published by a pro-apartheid group, according to the UK’s Telegraph.

Mair also is believed to have a history of mental illness. He was quoted in a 2010 article in The Huddersfield Daily Examiner that identified him as a client at a program for adults with mental health problems.