David Beckham says he feels Jewish thanks to granddad 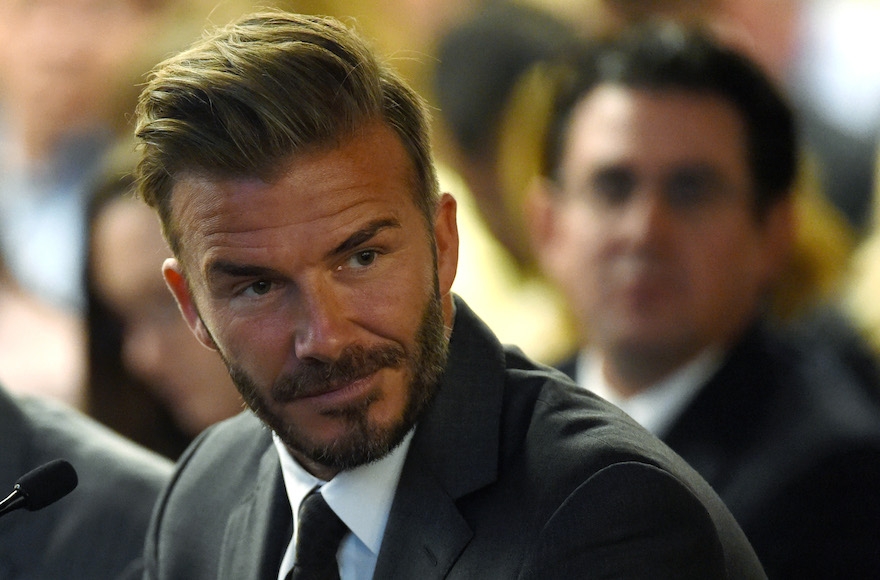 (JTA) — Former British soccer star David Beckham told a JCC audience in London that although he was not raised Jewish, he feels like a member of the tribe.

Beckham, 41, was asked last week at a public interview at the JW3 center, “Do you see yourself as Jewish in any way?”

He replied: “My grandfather was Jewish, that was on my mother’s side, so yes, I do see myself …”

The comment was interrupted by appreciative laughter before the iconic ex-player continued.

“I was never brought up Jewish, but like I said, my grandfather was, and every time we went to synagogue I was part of that,” Beckham said.

Beckham, who retired in 2013 and has a Hebrew-language tattoo on his left arm that reads “I am my beloved’s and my beloved is mine,” was known to be close to his maternal grandfather, who died in 2009 at 83. The former Manchester United and Real Madrid player said his grandfather was his soccer “inspiration.”

Some 270 guests, who won tickets in a ballot, attended the Q&A with the former midfielder, who made several references to his Jewish grandfather. He said he was saddened by the fact that only his oldest son, Brooklyn, had strong memories of the grandfather.

“He is really the only one who remembers him,” Beckham said. “It was explained to him, obviously the religion, but he was very young.”

Beckham, who also played pro soccer in the United States and France, was appearing at JW3 in his capacity as a UNICEF ambassador, and made it clear his involvement with the charity — which now includes his own Seven Fund — is his main focus and “passion.” He returned from a trip to Swaziland last week.