Auschwitz really happened — and this artsy architecture exhibit proves it 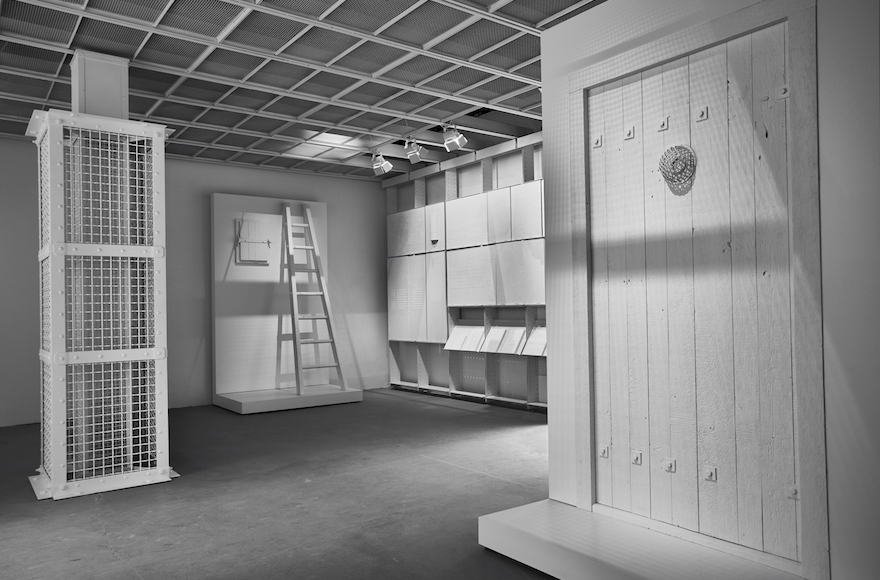 Interior of The Evidence Room at the Venice Architecture Biennale, with models of an Auschwitz gas column, a gastight hatch and a gastight door. (Fred Hunsberger)
Advertisement

VENICE, Italy (JTA) — It’s been more than 50 years since the Nuremberg trials, yet proving the Holocaust actually happened remains an ongoing project.

Why? For one, the Nazis covered their tracks, deliberately leaving gaps in the historical record. (In the death-camp blueprints that survive, for example, gas chambers were often labeled as morgues or “undressing rooms.”) As the years pass, survivors and eyewitnesses are dying or suffering dementia. Add in social media — including the rise of the “alt-right” — and it creates an ideal environment for neo-Nazis to swiftly disseminate claims that the Shoah is a fiction.

Filling the breach in our understanding of the Holocaust is a relatively new discipline called forensic architecture, which analyzes renderings, documents, videos and photographs of buildings and infrastructure and uses them to re-create atrocities, ranging from drone strikes on apartment buildings in wartime to the gassing of millions of Jews at Auschwitz.

An example of how forensic architecture can be used to set the record straight is on display at this year’s Venice Architecture Biennale. Titled “The Evidence Room,” it runs though Nov. 27.

An exhibit about Auschwitz might seem out of place in an international gathering that typically showcases state-of-the-art architecture and cutting-edge building materials. (The massive show features the work of 88 architects in the main exhibition, plus works by architects representing their counties in 63 national pavilions.) However, this year’s Biennale is titled “Reporting from the Front” and the show’s curator, Alejandro Aravena, indicated that his agenda is to highlight how architecture can be utilized to further humanitarian aims.

Case in point: Robert Jan van Pelt, the curator of “The Evidence Room” and a professor at Canada’s University of Waterloo, tells JTA he considers Auschwitz’s crematoria “the most important building of the 20th century.”

But his assessment isn’t based on aesthetic merits. It’s “for the simple reason that it had changed the course of history,” he explains.

“The Evidence Room,” in which van Pelt aims to address the ethical responsibilities of architects, re-creates some of the definitive evidence used in a landmark British court trial 16 years ago that pitted the American Jewish historian Deborah Lipstadt against the Holocaust-denying British historian David Irving. The trial — soon to be dramatized in a major motion picture — is viewed as a watershed in the ongoing campaign against Holocaust deniers because it relied on actual physical evidence as opposed to anecdotal accounts. Some of this evidence is on display in van Pelt’s exhibit, which is located in a 500-square-foot space at the Biennale’s Central Pavilion. The walls are white plaster and adorned with bas reliefs that depict blueprints for the gas chambers, photographs and illustrations based upon eyewitness accounts, including an image of a kneeling naked Jewish woman being shot in the back of the head by a German officer.

What makes the exhibition stand out from familiar Holocaust museum exhibits, however, are three full-scale models of gas chamber apparatus designed by the Nazis. There’s a mechanical gas canister delivery system encased by sturdy metal grillwork; a rough-hewn door with a grill-covered peephole, and a wood ladder propped against a wall with a small, locked hatch. These items, designed and fabricated by University of Waterloo students and faculty based on photos and eyewitness testimony, are also painted white.

The intention is to use this aestheticized architecture exhibit to enable visitors to better visualize subject matter that has been relegated to history books and courtrooms.

“The forensic study of architecture was able to show that Irving had deliberately misrepresented historical evidence,” Aravena writes in his essay on “The Evidence Room” in the Biennale’s catalog.

Van Pelt, who curated “The Evidence Room” with fellow professors Donald McKay and Anne Bordeleau, along with arts producer Sascha Hastings, has spent decades studying the architecture of Auschwitz and gathering physical evidence to show the workings of the Nazis’ systems. Thanks to his research, many myths have been definitively debunked — including that deadly gas emanated from shower heads. (It actually came from gas canister delivery systems like the ones represented in the exhibit.)

Van Pelt, 60, who is Jewish and is named after an uncle who was murdered at Auschwitz, says his initial inspiration to study Auschwitz came in the 1970s, when a line in the film 1955 French documentary “Night and Fog” resonated deeply with him: “The architects calmly plan the gates through which no one will enter more than once.”

A decade later, as a graduate student, he decided that the study of Auschwitz was just as important to the history of architecture as the study of the Chartres Cathedral.

Van Pelt discovered many of the documents and plans for Nazi death camps in archives in Eastern Europe that were opened after the fall of communism in 1989. Later, in 2000, he used some of the materials during testimony he gave as an expert witness in the Irving-Lipstadt trial. Van Pelt’s research subsequently became the basis of his 590-page book titled “The Case for Auschwitz: Evidence from the Irving Trial,” which Aravena read several years ago and led him to invite van Pelt to the Biennale. 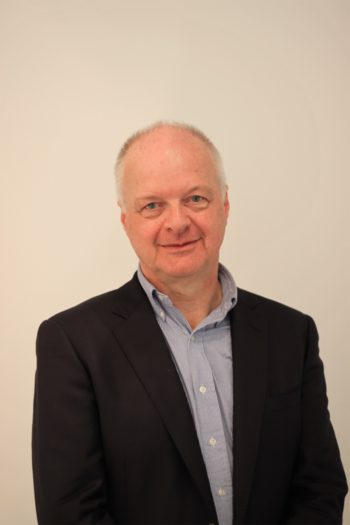 Robert Jan van Pelt, a professor at the University of Waterloo and the curator of “The Evidence Room.” (Siobhan Allman)

As it happens, near “The Evidence Room” is another exhibit featuring forensic architecture — this one by Eyal Weizman, an Israel-born professor at Goldsmiths, University of London. Unlike van Pelt’s work, which confirms accounts of events that Jews have long known to be unassailable, Weizman uses tools of the discipline to raise much more controversial questions about Israel’s treatment of the Palestinians.

At the Biennale, Weizman’s exhibit is in part about the impact of Israeli drone strikes on buildings in Gaza and their occupants. His work has been used in investigations by organizations such as the United Nations and Amnesty International into state-sponsored violence.

Weizman, who coined the term forensic architecture and credits van Pelt as an inspiration, got his start documenting what he calls illegal occupations in Israel. The discipline comes from his efforts to implicate Israeli architects for violations of international law and and human rights.

“Many neighborhoods in the occupied parts of Jerusalem as well as in the West Bank are designed to control Palestinian communities and to generate material harm,” he says.

During a tour of his exhibition at the Biennale’s opening, Weizman explains that forensic architecture has become more critical to documenting contemporary war crimes because modern warfare increasingly involves the targeting of buildings in dense urban environments. As a result, in places like Gaza, “the home has become the most dangerous place for people to be,” he says.

As for van Pelt, his pioneering forensic research on Auschwitz has made him into a world authority on methods of mass murder. Recently he aided Mexican prosecutors investigating the incineration of the bodies of dozens of murdered students. Having studied how corpses were burned in open-air pits at Birkenau — as well as having researched a Nazi unit that was tasked with opening and burning mass graves, with the goal of erasing physical evidence of the Holocaust — van Pelt provided some historical data that may help establish the truth surrounding the students’ abduction and murder.

These days, however, aside from assisting in occasional forensic investigations, van Pelt says he’s mostly focused on academic research and educating his students.

He says the history of Auschwitz serves as a warning for architects to be socially conscientious about the impact of the buildings they design. One example: the refugee housing being built in parts of Europe that van Pelt says “is starting to approach concentration camp conditions.”

“Architects should get the equivalent of the oath of Hippocrates,” van Pelt says. “When I teach my class, I tell them the story of Auschwitz — and I say whatever you do with your career, don’t do this.”