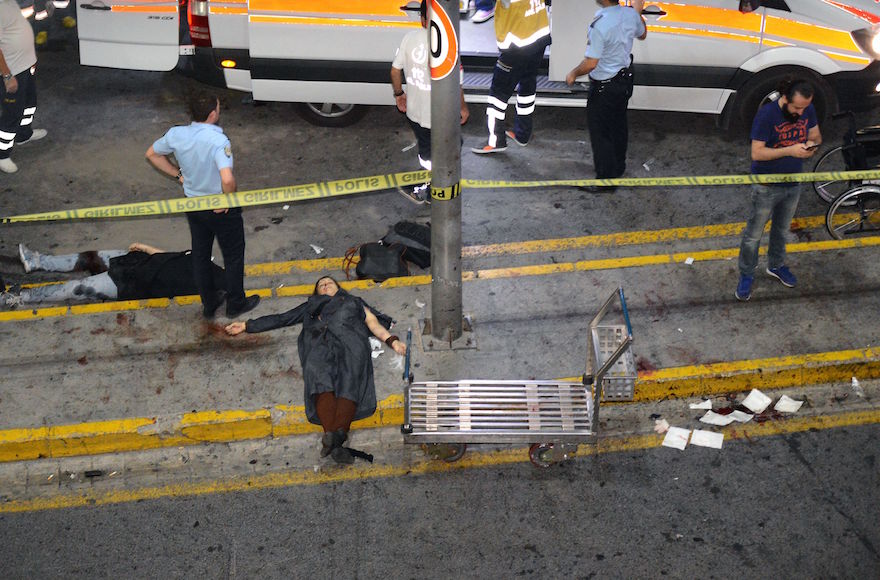 EDITORS NOTE: Graphic content / This picture obtained from the Ilhas News Agency shows ambulances and police intervening next to injured people lying on the ground, after two explosions followed by gunfire hit the Turkey's biggest airport of Ataturk in Istanbul, on June 28, 2016. At least 10 people were killed in a suicide attack at the international terminal of Istanbul's Ataturk airport, June 28, 2016. (AFP/Getty Images)
Advertisement

(JTA) — Israel’s Foreign Ministry is working to determine whether any Israeli citizens were injured in a suicide bombing Tuesday night in Turkey that killed 41 people and injured at least 230.

Three bombers blew themselves up at Istanbul’s Ataturk Airport, the third busiest in Europe, after opening fire at the entrance to the airport’s international terminal, according to media reports. Police had returned fire.

In March, a bombing in a tourist section of Istanbul killed three Israelis and injured several others. The same month, a suicide bombing at an airport in Brussels killed 32 people and injured more than 300.

The airport attack in Istanbul came on the same day that Israel and Turkey signed a reconciliation deal ending a six-year break in diplomatic relations.

According to the Times of Israel, the Israeli diplomats who were at the airport at the time of the Tuesday night attack were unharmed. Israeli diplomats said that no Israeli tourists were among the victims taken to the hospital.

Even during the diplomatic chill, Israel was one of the busiest routes for Turkish Airlines, with 695,000 Israelis flying round trip with the airline in 2014 and eight daily flights on the Tel Aviv-Istanbul route.

Turkish Airlines flights from Tel Aviv were suspended in the wake of the attack.

“The only two flights from Ataturk to Tel Aviv this evening have already landed. A flight to Istanbul took off about an hour ago — and will surely land in a different airport. Two Turkish Airlines flights were due to depart tonight to Istanbul, and we recommend that members of the public due to fly with the company keep updated online,” the Israel Airports Authority said soon after the attacks.