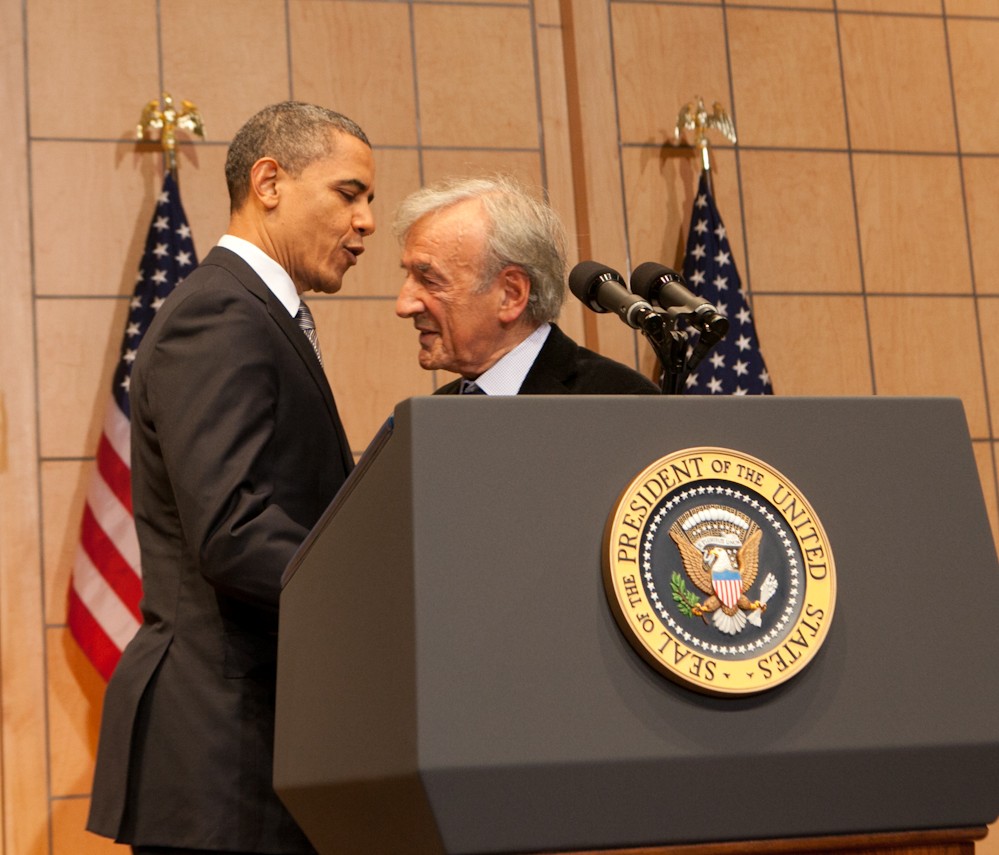 President Obama embraces Elie Wiesel before delivering a speech about the Holocaust and its meaning at the U.S. Holocaust Memorial Museum, April 23 2012. (Courtesy USHMM)

(JTA) — Elie Wiesel, a Nobel Peace Prize laureate and activist against racism who survived the Holocaust, died at the age of 87.

Wiesel, who was well-known internationally for his many books, essays and educational projects about the Holocaust, died on Saturday of natural causes, the World Jewish Congress said in a statement.

“The State of Israel and the Jewish People bitterly mourn the passing of Elie Wiesel,” Israeli Prime Minister Benjamin Netanyahu said in a statement Saturday. “Elie, the wordsmith, expressed through his extraordinary personality and fascinating books the triumph of the human spirit over cruelty and evil. Throughout the dark period of the Holocaust, in which our six million brethren perished, Elie Weisel was a beacon of light and an example of humanity that believes in man’s inherent good.”

“Elie Wiesel was more than a revered writer,” WJC President Ronald Lauder said in his group’s statement. “He was also a teacher for many of us. He taught us about the horrors of Auschwitz. He taught us about Judaism, about Israel, and about not being silent in the face of injustice.”

The recipient of over 100 honorary doctorates, Wiesel, who was born in what is today Romania, received France’s distinguished Prix Medicis for his 1968 book “A Beggar in Jerusalem,” describing the Jewish response to the reunification of Jerusalem following the Six-Day War.

He also received the U.S. Presidential Medal of Freedom and the rank of Grand-Croix in France’s Legion of Honor, and he was knighted as Commander of the Order of the British Empire. He won the Nobel Peace Prize in 1986 for his role in speaking out against violence, repression and racism.

When he was a teenager, Wiesel was sent with his father, Shlomo, to the Buna Werke labor camp, a sub-camp of Auschwitz III-Monowitz. They were forced to work for eight months before being transferred to a series of other concentration camps near the war’s end. Wiesel’s father starved to death.