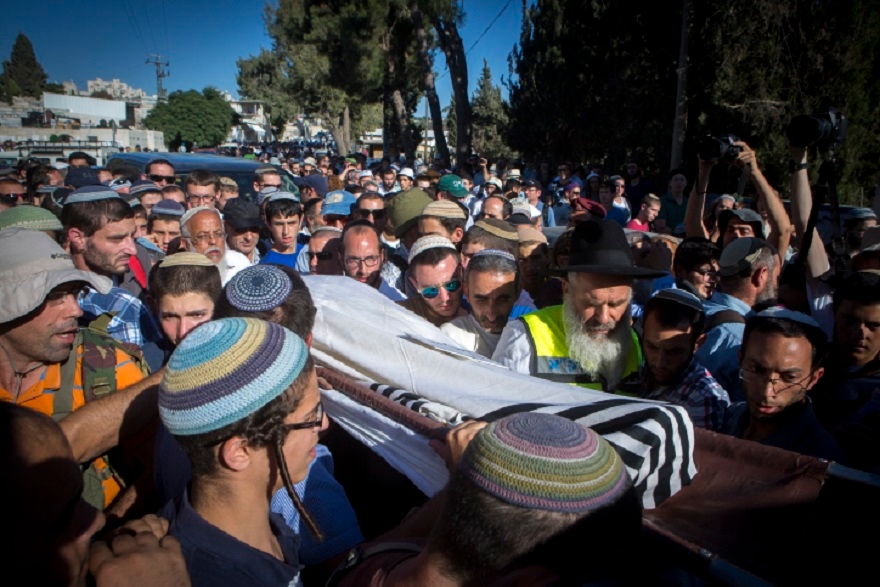 Friends and family carrying the body of Rabbi Michael "Miki" Mark at his funeral service at the Har Hamenuchot cemetery in Jerusalem, July 3, 2016. (Miriam Alster/Flash90)
Advertisement

(JTA) — More than 1,000 mourners attended the funeral for a father of 10 who was killed in a West Bank drive-by shooting.

The funeral of Rabbi Michael “Miki” Mark was held Sunday in the Otniel settlement in the West Bank followed by his burial in Jerusalem. Mark was killed Friday when terrorists opened fire on his car as he drove near Hebron.

President Reuven Rivlin, a distant relative of Mark, delivered remarks at his funeral.

“I stand in front of your coffin, Miki, Michael, in sorrow and anguish, and with me stand an entire nation, together grieving,” Rivlin said, according to Haaretz. “Even before the Sabbath began, the murderer’s hand robbed your family of you in cold blood, in front of two of your children, and in front of your beloved wife, Chavi, who was seriously injured.

“Miki, I am sorry to say that I learned about you, only after your death. I learned that you were a loving and beloved father, grandfather and son. An intellectual who was also a man of action. A person who loved hands-on work, but also excelled in the house of learning.”

Mark’s son Yeshoshua said that “as the years pass, we find greater depth. More people you helped. A community of admirers. You taught us to accept the other. You were a giving man with endless time, attention and thought. A man of perception at all levels.”

One of Mark’s daughter, Orit, called her father “the most amazing in the world.”

His children, in a video posted on social media, had appealed for mourners to attend the funeral to memorialize their father.

“Come and hear how good our father was, and you’ll be better people, more loving people,” one of his daughters said.

Along with his wife, Chavi, being seriously wounded in the shooting, two of his children were lightly injured.