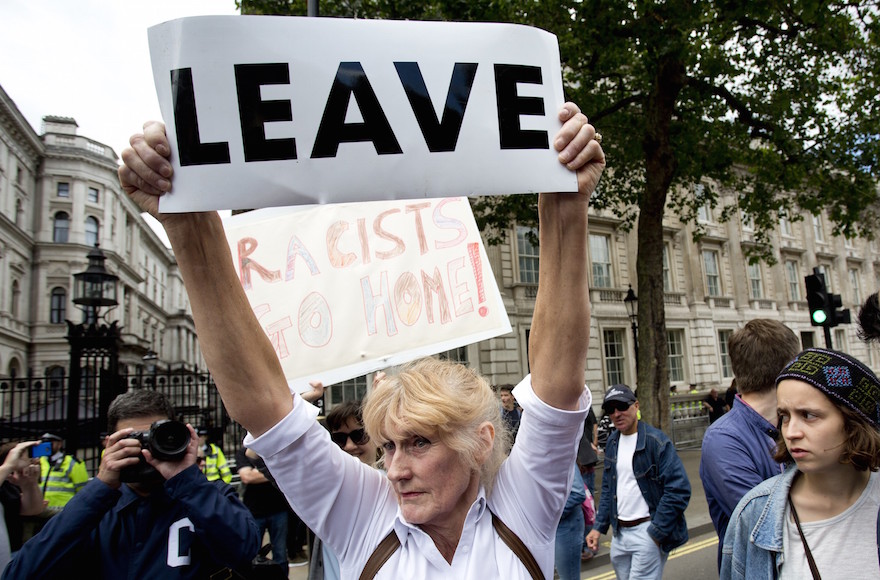 LONDON (JTA) — For two years, in her travels around the English capital, Natalie Pitimson has toted a library bag emblazoned with a word in Yiddish.

“The word ‘schlep’ written on the side perfectly describes my regular hour-long trek through central London,” Pitimson, a senior sociology lecturer at the University of Brighton, wrote on her blog.

She had encountered no unpleasant incidents over the bag, whose slogan “reminds me of growing up in a lively Jewish family where such phrases littered otherwise very English sentences,” she wrote.

But last week, the bag caused Pitimson distress when it invited a vicious verbal attack by a fellow passenger of the London underground. According to Pitimson, the man told her to “f— off back to Israel with the other yids.”

The June 28 incident left Pitimson “shaking and very upset,” she wrote. “I thought about nothing else for the rest of the day. I have never been targeted in this way before.”

Pitimson traces the schlep incident to a noticeable uptick in expressions of xenophobia following the June 23 referendum in the United Kingdom, in which 52 percent of voters supported a British exit, or Brexit, from the European Union.

As the nation struggles to deal with the aftermath of the divisive vote, Brexit opponents cite such incidents as proof that the vote has unleashed a wave of racism. According to the National Police Chiefs Council, 331 alleged hate crime incidents were reported to police in the week after the vote, compared with a weekly average of only 63 before the vote (the statement did not specify the previous time period).

The Community Security Trust, British Jewry’s watchdog on anti-Semitism, expressed its concern, along with other British Jewish groups, over this rise in incidents, which included hate graffiti against Polish immigrants and verbal abuse of other immigrants on the street.

But neither CST nor the Campaign Against Antisemitism, a smaller, volunteer-led alternative to the CST, can point to any directly related rise in anti-Semitic incidents following Brexit.

In the heavily Jewish neighborhood of Golders Green, some locals said they feel no less safe after the vote than they did before. “I don’t see it, not more than usual,” said Mike Cohen, an observant Jew from Golders Green. “Not on the street, not on television, not anywhere.”

Nevertheless, reports of hate crimes and verbal attacks prompted front-page headlines and passionate op-eds in Britain’s liberal media. Minister David Cameron, who has worked tirelessly to prevent a Brexit vote and resigned over his efforts’ failure, condemned the spate of attacks.

“In the past few days we have seen despicable graffiti daubed on a Polish community centre, we’ve seen verbal abuse hurled against individuals because they are members of ethnic minorities,” Cameron said in Parliament last week. “Let’s remember these people have come here and made a wonderful contribution to our country. We will not stand for hate crime or these kinds of attacks; they must be stamped out.”

But some Brexit supporters suggested Cameron and other Brexit opponents were exaggerating the severity of the situation to undermine the Brexit results.

Will Franken, a conservative London comedian and blogger, wrote that the media and watchdog groups reporting a rise in hate crimes were “scaremongering” to discredit those who voted to leave the EU.

CST’s director of communications, Mark Gardner, said his organization was “taking very seriously concerns that anti-Semitism might be abused by those with other agendas than fighting racism.”

But Gardner also said that complaints of racist rhetoric after Brexit nonetheless gives cause for concern.

“The racism that came out in Brexit’s wake is based on the principle of ‘taking the country back’ and when that is the mode of thinking, it is very easy for Jews to also be labeled as aliens, as inauthentic to Britain,” he said.

He added the “Brexit has been seized upon by far-right anti-Semites in social media circles, where some celebrated the vote as a defeat to Zionist bankers.”

Pitimson has no doubt that her subway ordeal is Brexit-related.

“I’ve just been verbally abused – tell me again how racism played no part in Brexit,” she titled her blog entry on the experience.

Though her interlocutor said nothing of the vote specifically, Pitimson feels his actions are an expression of nationalist sentiment against anyone perceived to be foreign. Immigration was a major theme for those who voted to leave the EU, many of whom cited concerns over the stream of 1.8 million Muslims who entered Europe this year from the Middle East. Migrant workers from Eastern European were also a major gripe.

In another London underground incident, filmmaker Haim Bresheeth said that on June 24, an “obvious Brexiter” confronted him because Bresheeth spoke in Hebrew on the phone. “In this country we speak English! Can’t you speak English, sir?” the man told Bresheeth, but made no reference to the vote, according to Bresheeth’s account on Facebook of the incident.

Brexit vote: What’s at stake for Jews in Britain